ANAHEIM, Calif. — The season didn't offer the most promising of starts after the Winnipeg Jets opened with consecutive losses. But things clicked in their next game, and the Jets haven't slowed since.
0
Nov 24, 2017 8:24 PM By: Canadian Press 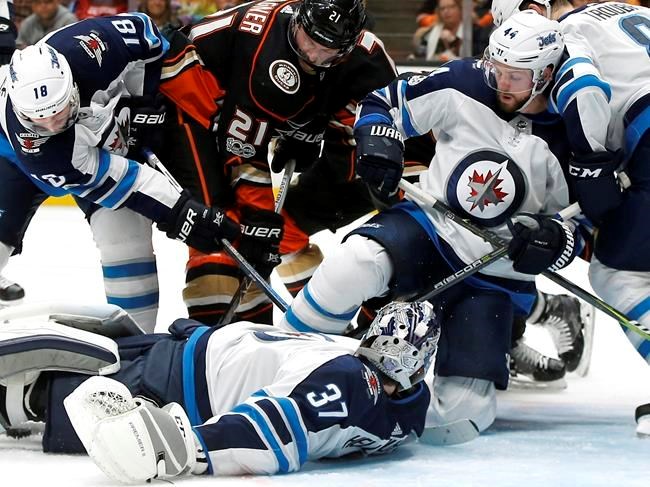 ANAHEIM, Calif. — The season didn't offer the most promising of starts after the Winnipeg Jets opened with consecutive losses.

But things clicked in their next game, and the Jets haven't slowed since.

Winnipeg was at it again Friday, jumping out to a 2-0 lead just 5 minutes into the game on goals by Nikolaj Ehlers and skating to a 4-1 victory over the Anaheim Ducks.

"We played the way we wanted to and succeeded," Ehlers said.

"We're just getting better and better at closing games out like this," said Bryan Little, who had a goal and two assists.

It was a discouraging loss for the Ducks, who were coming off a dismal performance against the expansion Las Vegas Golden Knights.

"It looked like we were skating and maybe didn't even have our skates on," Ducks coach Randy Carlyle said. "We were so slow to react for the first 5 or 6 minutes."

It could have been worse for Anaheim. It gave up a goal 34 seconds into the game that was nullified when the Ducks won a challenge for offsides.

Six seconds later, Ehlers scored his first goal. Four minutes later, he scored again on a power play to give him 10 goals on the season.

"We got on them early and never let off," said goalie Connor Hellebuyck, who had 30 stops. "We played our game right to the final buzzer. You can tell guys are supporting each other. No one is taking a shift off."

Anaheim's lone goal came early in the second period when Francois Beauchemin fired a shot from the blue line that whizzed past Hellebuyck. It was his first goal of the season.

The Ducks could never find the net again, despite two excellent open chances by Derek Grant and Jakob Silfverberg.

"Right now, those are the things that come back to haunt you," Carlyle said. "It was a game that was there."

John Gibson stopped 34 shots for Anaheim, but could not overcome the Jets' early barrage. He had been peppered with 143 shots in his last three games.

Little added his goal in the third period. Both Ehlers and Little play on Winnipeg's second line.

"We don't have to hide a line and we don't have to rely on one line too heavy," Jets coach Paul Maurice said. "All the lines would probably like to play a little more."

Kyle Connor scored an empty-net goal from the red line to complete the scoring.

The Jets continued to receive strong goalie play from Hellebuyck and Steve Mason. Hellebuyck was particularly effective after the Ducks recovered from their slow start and began to apply pressure.

"We had a fair amount of chances, especially on the power play," Beauchemin said. "Guys were open in the slot. We just didn't capitalize."

Anaheim failed to score on its two power plays.

During a second-period scrum, Anaheim's Corey Perry got his chin bloodied by the butt end of Blake Wheeler's stick. The officials missed the incident. ... Winnipeg is 13 for 36 on the power play in November. ... Anaheim goalie Ryan Miller (lower body injury) was activated from injured reserve before the game. He is expected to start Saturday in Los Angeles. ... The Jets evened their record against the Ducks to 4-4-4 in their last 12 meetings.

Jets: Head to northern California to play the Sharks in San Jose on Saturday.

Ducks: Open a six-game trip Saturday in Los Angeles against the Kings.