ARLINGTON, Texas — Philip Rivers was more than comfortable on the Thanksgiving stage for the first time in his 14 NFL seasons. Same with Keenan Allen, who didn't have to wait nearly that long.
Nov 23, 2017 8:59 PM By: Canadian Press 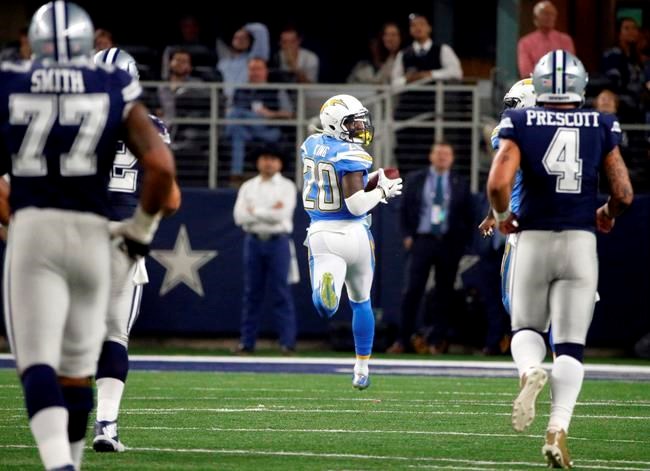 ARLINGTON, Texas — Philip Rivers was more than comfortable on the Thanksgiving stage for the first time in his 14 NFL seasons.

Same with Keenan Allen, who didn't have to wait nearly that long.

Rivers threw for 434 yards and three touchdowns, Allen had a career-high 172 yards in his second straight huge game and the Los Angeles Chargers beat the fading Dallas Cowboys 28-6 on Thursday.

Desmond King returned an interception 90 yards for the punctuating touchdown. The Chargers (5-6) moved within 1 1/2 games of AFC West-leading Kansas City after starting 0-4 while the Chiefs won their first five.

"Playing on Thanksgiving was everything it was cranked up to be," said Rivers, who was 27 of 33 in his ninth career 400-yard game . "As a quarterback, you want to play well and throw it to your guys, and we did a lot today. But I'm more excited about our team."

The defending NFC East champion Cowboys (5-6) have lost three straight games by at least 20 points for the first time since 2004, all without suspended star running back Ezekiel Elliott in a damaging slide for their fading playoff hopes.

Dallas, playing its 50th Thanksgiving game, finally ended a touchdown drought at a team-record 10 quarters on Rod Smith's 2-yard run early in the fourth quarter. The Cowboys have been outscored 72-6 in the second half of the three losses.

Quarterback Dak Prescott has looked lost without Elliott, his backfield mate for a pair of remarkable rookie seasons that led the Cowboys to the best record in the NFC last season. Prescott had two interceptions, giving him five in two games after throwing just four a year ago.

Last year's NFL Offensive Rookie of the Year has nine picks for the season and the Cowboys already have twice as many losses as a year ago with Elliott only halfway through a six-game suspension for alleged domestic violence.

"The last thing I'm doing is pointing a finger and saying, 'We need this guy, we need that to happen,'" said Prescott, who was 20 of 27 for 179 yards in his third straight game without a TD pass. "I'm going to say we've just got to figure out what's going on and get out of this slump."

Rivers had seven completions of at least 22 yards, including Allen's 42-yard catch-and-run when he weaved through five defenders for a 22-6 lead.

Allen, in his fifth season, has two of his three biggest yardage games in the past two weeks. He had 11 catches and a score after 12 grabs for 159 yards and two TDs in a 54-24 win over Buffalo.

"When I first got here, he was a little heavy," first-year coach Anthony Lynn said. "I think once he got his weight down, you could see the run after catch, the quickness, all those things you see in a No. 1 receiver."

LA, with 500-plus total yards (515) for the first time in two years, overcame the loss of kicker Nick Novak to a back injury, the second straight game that Dallas' opposing kicker was injured and in the same game that Dallas' Dan Bailey returned after missing four games with a groin injury.

Just like last week in the Cowboys' blowout loss to division-leading Philadelphia, neither of the kickers mattered much with the Dallas sputtering and the not getting key stops.

Novak returned to make a 22-yard field goal after the injury, but left for good after missing an extra point . Punter Drew Kaser was 1 of 3 on extra points. The Chargers went for a fourth-and-13 in field goal range in a scoreless game early in the second quarter with Novak's status in doubt, coming up a yard short.

Four-time Pro Bowl left tackle Tyron Smith returned for Dallas after missing two games with back and groin injuries, but the Cowboys lost 2014 All-Pro right guard Zack Martin to a concussion in the first half.

Austin Ekeler had a 38-yard catch to set up San Diego's first touchdown in the third quarter, and Tyrell Williams added a 31-yard grab before making a 27-yard scoring catch.

LA has a Thanksgiving winning streak in Texas, because the Chargers' previous holiday showing was a 21-17 AFL win at Houston in 1969, the year before the merger. It was the longest gap (48 years) for a team between Thanksgiving games in NFL history.

Dallas tight end Jason Witten, already the Thanksgiving record-holder in catches, passed Detroit's Herman Moore for the most yards on the holiday. Witten now has 80 catches for 853 yards.

Chargers LT Russell Okung was the only player from either team with a display during the national anthem, raising his fist while he was a step behind teammates lined up on the sideline.

Finally! Freeman, Braves top Reds 1-0 in 13th to open series
Sep 30, 2020 6:40 PM
Comments
We welcome your feedback and encourage you to share your thoughts. We ask that you be respectful of others and their points of view, refrain from personal attacks and stay on topic. To learn about our commenting policies and how we moderate, please read our Community Guidelines.