TORONTO — At the Toronto Raptors' media day to kick off the new season, Norman Powell spoke earnestly about the huge opportunity that awaited him.
Oct 5, 2017 4:31 PM By: Canadian Press 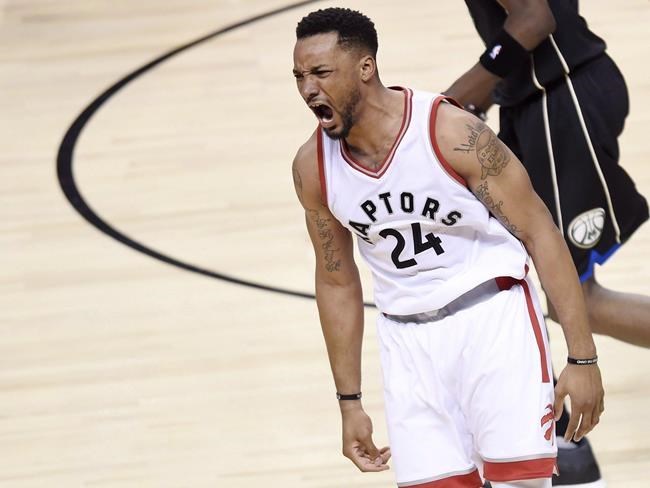 TORONTO — At the Toronto Raptors' media day to kick off the new season, Norman Powell spoke earnestly about the huge opportunity that awaited him.

The Raptors have shown faith in the hard-working 24-year-old who's potentially played his way into a spot as a starter this season. And on Thursday, the team rewarded him with a four-year contract extension, a team official confirmed. The deal, which begins in the 2018-19 season, is reportedly worth US$42 million.

"I'm ready for it," Powell said on media day of the chance to play major minutes this season. "It's what I've worked for. It's what I've fought for my first two years. . . I've worked, I've pushed myself in a totally different way this off-season.

"I'm preparing myself for a full 82-game season, for increased minutes, taking care of my body, just training and trying to improve. So I'm ready for it. I'm excited to get the season started."

The UCLA product was drafted 46th overall by Milwaukee in 2015, then acquired in a draft night deal that sent Greivis Vasquez to the Bucks. The athletic combo guard averaged 8.4 points and 2.2 rebounds in 76 games with Toronto last season, and has played a key role in the Raptors' past two playoff appearances.

The versatile scorer and solid defender was a spark off the bench in Toronto's Game 5 victory over Milwaukee last season, scoring a career-high 25 points. He helped clinched the opening round series against Indiana a year earlier, hitting three of four three-point shots in Toronto's Game 7 win over the Pacers.

He scored a career-high 30 points in the Toronto's 103-96 win over Brooklyn in the season finale in 2016, and earned Eastern Conference rookie of the month honours for April.

Powell proclaimed at training camp that he's in the best shape of his life after a gruelling off-season regime that included three workouts most mornings — at 5 a.m., 7 a.m., and 9 a.m. — at different gyms. His rest was the 15-minute drive between gyms. The reason behind the laborious schedule, he explained, was to train his body while fatigued.

When the Raptors bade farewell to Canadian guard Cory Joseph, DeMarre Carroll, and Patrick Patterson this past off-season, it swung open a door for young players such as Powell. The six-foot-four Powell is expected to either start — it's between Powell and newcomer C.J. Miles — or be the first option off the bench.

"His mental mind is ready, I think he's physically ready," Lowry said. "I think he just has to get more comfortable with being an aggressive guy but making plays for everyone else. It's a good blend that he has to figure out. I think he's going to just going to continue to learn that with the more minutes and the more repetitions on the floor and the more game time he gets."

The deal was first reported by ESPN.