HALIFAX — The Carleton Ravens used a fourth-quarter surge to avoid an upset and advance at the U Sports men's basketball championship. Eddie Ekiyor scored 25 points as No. 1 Carleton pulled away for an 81-64 win over the No.
Mar 8, 2018 10:52 PM By: Canadian Press 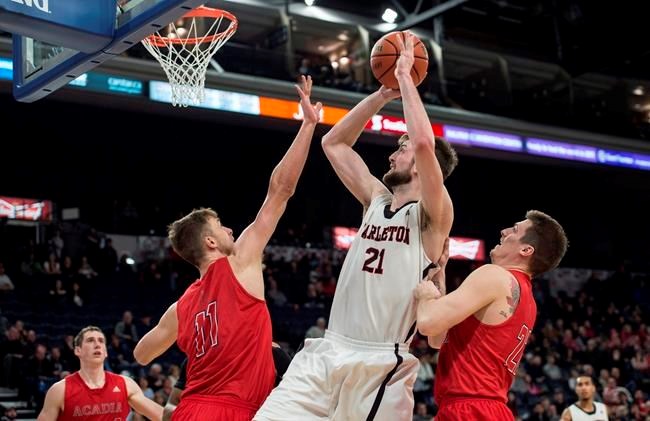 HALIFAX — The Carleton Ravens used a fourth-quarter surge to avoid an upset and advance at the U Sports men's basketball championship.

Eddie Ekiyor scored 25 points as No. 1 Carleton pulled away for an 81-64 win over the No. 8 Acadia Axemen on Thursday in the tournament quarterfinals, keeping its quest for an eighth straight national championship alive.

Carleton, which entered the tournament with a 23-0 record in the Ontario University Athletics conference, only had a three-point lead at half and was up 54-52 through three quarters. But the Ravens outscored the Axemen 27-12 in the fourth — with 13 points coming from Ekiyor on 6-of-10 shooting — to move on to the semifinals.

"Acadia played hard and we didn't make shots until the end. They did a great job keeping our guards off balance and we turned it over a bit," said Ravens head coach Dave Smart.

"For three quarters they went big and killed us on the boards, but in the fourth quarter we continued to get in the paint and we started making shots."

The Ravens will play the No. 5 Ryerson Rams in Saturday's semifinals.

Manny Diressa scored 25 points and Jean-Victor Mukama had 21 points and nine rebounds as Ryerson earned its place in the tournament's final four with a 88-62 victory over the No. 4 Alberta Golden Bears. Mamadou Gueye had a team-high 12 points for the Golden Bears.

The other men's semifinal on Saturday will see the No. 2 Calgary Dinos against the No. 3 McGill Redmen.

And Ambi Diawara had 19 points and seven rebounds while David Kapinga chipped in 18 points as Calgary squeezed out a 78-76 win over the No. 7 Brock Badgers in their quarterfinal matchup. Johneil Simpson had a game-high 24 points for the Badgers.