TORONTO — The Montreal Canadiens already have knocked out one Pennsylvania heavyweight this month. Now, the upstart Habs will try to do it again against an even tougher opponent from the Keystone State.
Aug 9, 2020 6:06 PM By: Canadian Press 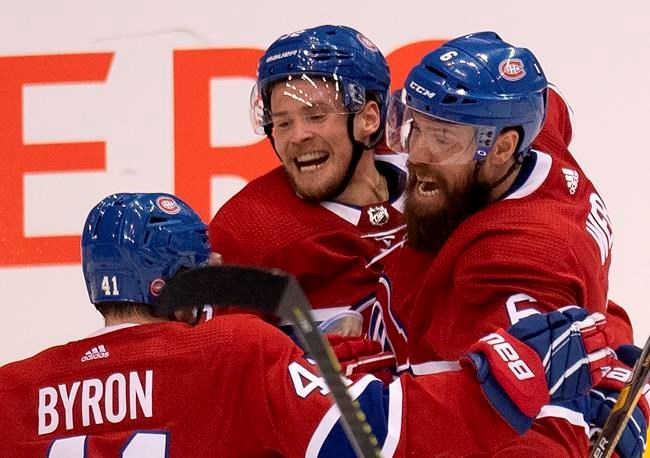 TORONTO — The Montreal Canadiens already have knocked out one Pennsylvania heavyweight this month.

Now, the upstart Habs will try to do it again against an even tougher opponent from the Keystone State.

Fresh off a qualifying-round upset over the 2016 and '17 Stanley Cup champion Pittsburgh Penguins, the Canadiens draw the top-seeded Philadelphia Flyers in the first round of the playoffs.

"I'm not going to stand here and say we're the underdogs, I'm not playing this card right now because it's a lot of wasted time," Canadiens coach Claude Julien said on a video conference with reporters on Sunday. "We're preparing to play in my estimation the best team here in the Eastern Conference right now by their play."

The Flyers allowed just three goals in going 3-0 in the qualifying round to secure the top seed in the Eastern Conference.

Had they not lost 2-0 to the Boston Bruins in their last game before the COVID-19 pandemic suspended play, the Flyers would be on a 13-game winning streak.

Representing a city that produced boxing legends Joe Frazier and Bernard Hopkins, the Flyers exhibit that same sort of grit.

"I think Philly might be a little bit more physical and tough (than the Penguins)," Canadiens defenceman Victor Mete said. "They have a couple more bigger guys there."

The Habs had some success against the Flyers this year, winning once and losing twice in overtime.

"We played well and had good games against Philly all year," Canadiens defenceman Brett Kulak said. "When you've got Pricey (goalie Carey Price), he's been playing at the top of his game, he gives us a chance to win every night."

THE WAIT IS OVER

The Vancouver Canucks ended the longest playoff drought for any Canadian team, reaching the first round for the first time since 2015 by ousting the Minnesota Wild in the qualifying round in Edmonton.

The team didn't hesitate in posting pictures and videos of the excitement in the aftermath of its Game 4 overtime win on social media.

"It's just nice to be back in playoffs now," Canucks forward Brandon Sutter said. "All year, we've talked about just getting in and anything can happen. After four years of missing out on it, we're pretty pumped to be back in now. You can see excitement on our team after we won. It was just that awesome feeling."

Now, the Canucks will attempt to snap another skid when they meet the reigning Stanley Cup champion St. Louis Blues. Vancouver hasn't won a best-of-seven series since its run to Game 7 of the Stanley Cup final against Boston in 2011.

"There's no better way to learn than to have success," Canucks coach Travis Green said. "I know this wasn't an actual round-of-16 playoffs, but trust me it was no different than a playoff series. For them to go through this before you actually get to the playoffs, it means a lot for every team but it means a lot for a young team for sure."

The Calgary Flames are singing the praises of Milan Lucic.

Acquired in a deal with the Edmonton Oilers last summer, the big winger had just eight goals and 12 assists in 68 games this season.

But the Vancouver native averaged a point a game (one goal, three assists) in a four-game win over the Winnipeg Jets in the qualifying round in Edmonton.

Lucic, 32, has appeared in two Stanley Cup finals with Boston, winning one, and brings experience to a Flames roster gunning for its first playoff series win since 2015.

"He's been through every single high and low in hockey," Flames forward Dillon Dube said. "To have a voice like that in the dressing room, you can really lean on him."

The Flames face the Dallas Stars in the first round.

New York Islanders supporters are learning why Jean-Gabriel Pageau was a fan favourite in Ottawa.

Dealt to New York at the trade deadline after not coming to terms with the rebuilding Senators on a contract extension, Pageau had three goals in the Islanders' four-game win over the Florida Panthers in the qualifying round in Toronto.

Pageau, who grew up just outside Ottawa before being drafted by his local squad, had Senators fans singing and chanting his name during the team's surprise run to Game 7 of the Eastern Conference final in 2017.

"You check a lot of brackets and columns with him because he's like a little bit of a Swiss army knife," Isles coach Barry Trotz said of Pageau, who signed a six-year extension with his new club after the trade.

Trotz faces his old team, the Washington Capitals, next.

This report by The Canadian Press was first published Aug. 9, 2020.

Dickerson homers as Marlins beat Cubs 5-1 in playoff opener
Sep 30, 2020 9:24 PM
Comments
We welcome your feedback and encourage you to share your thoughts. We ask that you be respectful of others and their points of view, refrain from personal attacks and stay on topic. To learn about our commenting policies and how we moderate, please read our Community Guidelines.