OTTAWA — Mike Hoffman joked earlier in the day with his buddy Robin Lehner that he was going to score on his former teammate Thursday night.
Feb 15, 2018 11:12 PM By: Canadian Press 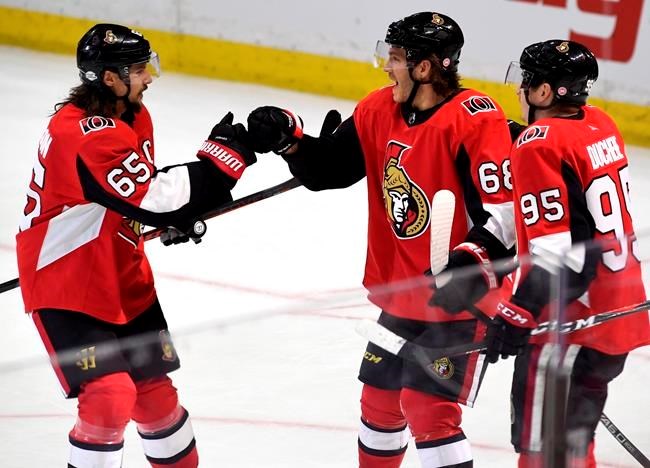 OTTAWA — Mike Hoffman joked earlier in the day with his buddy Robin Lehner that he was going to score on his former teammate Thursday night.

Hours later Hoffman did so, scoring 1:13 into overtime to give the Ottawa Senators a come-from-behind 3-2 win over the Buffalo Sabres.

Hoffman took a cross-ice pass from Erik Karlsson and beat Lehner with a one-timer from the left side.

"We were fortunate enough to catch them in a middle of a change and Karlsson made a great play and I just tried to hit the net," Hoffman said.

"The ice is a little choppy in overtime and you never try to put one in the top corner, it's more so just getting the puck on net and that's what I tried to do."

Scott Wilson and Evan Rodrigues scored in regulation for the Sabres (18-30-10). They got a 33-save performance from Lehner, who has yet to lose in regulation against his former team going 5-0-3.

"He played terrific and he always seems to bring his best against Ottawa," Sabres forward Kyle Okposo said of Lehner.

"It wasn't a clean game and I thought our effort was sporadic. I thought in the second period they absolutely dominated us. We've got to better.'

Twice the Senators trailed by a goal in the third period only to comeback, the second time being a goal from Brassard with 30.9 seconds left in regulation.

"We got exactly what we deserved. The compete, the battles, (Ottawa) won the majority of them and even though we somehow found a way to get a 2-1 lead, we've played much better than that in the last three or four games," Sabres coach Phil Housley said.

"It's a good learning lesson for our guys that you have to come to play and prepare and compete every night."

Gaborik tied the game 1-1 when he tipped a point shot from Karlsson past Lehner at 5:15 of the third. It was the first goal for Gaborik in his first game with the Senators after being acquired Tuesday in a trade with the Los Angeles Kings.

Gaborik also had an assist in the game.

"I felt good right from the get go. Got use to some systems and some basic rules of thumb and I think it worked out pretty well," said Gaborik.

"We battled right to the end and I think their goalie held them in there. Happy to get going on a winning note."

Nick Shore played. He also came over in the trade that sent Dion Phaneuf and Nate Thompson the other way.

The Sabres took a 2-1 lead at 15:31 when Rodrigues took a pass from Okposo and beat Anderson off the post and in.

The Senators outshot the Sabres 22-12 over the first two periods and had four power plays to just one for the Sabres, but the only goal came 6:31 into the game as Wilson took a shot from the face-off circle that beat Anderson on the short side.

The puck was lobbed into the Senators end before being bobbled by the defensive pairing of Mark Borowiecki and Thomas Chabot and ended up on Wilson's stick.

Notes: Alexandre Burrows and Frederik Claesson were scratches for the Senators Thursday while Jack Eichel, Jordan Nolan and Justin Falk were scratches for the Sabres… Burrows was serving the fourth game of a 10-game suspension for kneeing Taylor hall of the New Jersey Devils in the head… The Sabres have recorded points in 10 straight games against the Senators (7-0-3) including their first ever five-game winning streak against the Senators… The Senators are home to the New York Rangers Saturday while the Sabres play host to the Los Angeles Kings Saturday.