McDavid ties it, then scores in shootout to lift Edmonton over Islanders

EDMONTON — Connor McDavid was a one-man wrecking crew for the Edmonton Oilers on Thursday. McDavid tied the game late in the third period, and then added the shootout winner as the Oilers skated away with a 2-1 victory over the New York Islanders.
Mar 9, 2018 12:40 AM By: Canadian Press 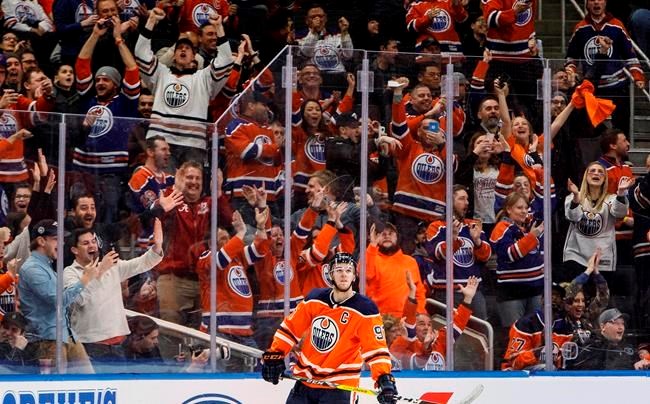 EDMONTON — Connor McDavid was a one-man wrecking crew for the Edmonton Oilers on Thursday.

McDavid tied the game late in the third period, and then added the shootout winner as the Oilers skated away with a 2-1 victory over the New York Islanders.

"He just takes over the game when he wants to," Oilers goalie Cam Talbot, who made 30 saves, said of McDavid. "He has that ability on any given night. In a one-goal game, that is who you want on the ice. You know he is going to do something special at some point. He never ceases to amaze."

Edmonton's captain finished with nine shots on net and over 27 minutes of ice time.

Oilers defenceman Darnell Nurse agreed that McDavid is sometimes on a level that is hard to match.

"He is such a difference maker," he said. "When we need a big goal, he always seems to get one. Night-in and night-out he is making differences like that."

Thomas Hickey opened the scoring for the Islanders (29-29-10), who have lost eight straight — their longest skid in more than four seasons. Christopher Gibson, who made just his second start of the season and was playing in the sixth game of his NHL career, had 35 saves.

"It's a tough way to lose a hockey game, because for the most part we are in control and we are playing good hockey," said Islanders defenceman Brandon Davidson. "It'd be nice to get on a roll, but it's tough one tonight with that bounce."

There was no scoring in the first period, with the Islanders putting nine shots on Talbot and Edmonton sending seven on Gibson.

The game remained scoreless through 40 minutes, with Edmonton taking a 22-17 edge on the shot clock.

The Islanders broke the scoreless deadlock 1:54 into the third period after the Oilers got sloppy in their own zone, allowing Hickey to get in tight and score, picking the top corner with a backhand shot for his fourth of the season.

Edmonton ended Gibson's shutout bid with just 1:50 to play in the third period when McDavid banked a shot off of New York defender Davidson and into the net for his career-high 31st goal of the season.

McDavid was hooked on a breakaway three minutes into overtime and was awarded a penalty shot, but hit the post on the attempt.

"We got the win and that is all that matters," McDavid said. "It would have been nice to score on that opportunity in overtime, but we'll take the shootout win."

New York's Jordan Eberle also came close in the overtime session, but Talbot came across to make a huge pad save. The game marked the return to Edmonton for Eberle, who was dealt by the Oilers for forward Ryan Strome on June 22, 2017.

The Oilers finish off a five-game homestand on Saturday against the Minnesota Wild. The Islanders close out a four-game trip in Calgary on Sunday.