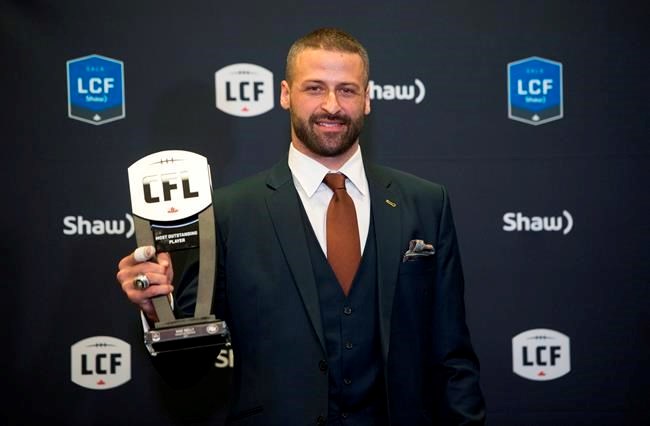 The Edmonton Eskimos quarterback was named the CFL's outstanding player by the Football Reporters of Canada and eight league coaches (77 votes). Ray was the runner-up but will lead the Toronto Argonauts into the Grey Cup against the Calgary Stampeders on Sunday.

"Without a doubt, no question," Reilly said emphatically. "I don't even have to think about that.

"I hope my teammates see this for what it is, which is an award we all won together. It's something they can be proud of for all their hard work because we're not going to get the opportunity to write history together and have our names on that Cup and that sucks."

Reilly, 32, started all 18 regular-season games and led Edmonton (12-6) to five straight wins to end the regular season and clinch third in the West Division despite numerous injuries. The six-foot-three, 230-pound Reilly received 64 votes after leading the CFL in passing (5,830 yards) and finishing tied with Ottawa's Trevor Harris for most TDs (30).

Reilly also ran for 12 TDs and had 39 completions of 30-plus yards, both league-best marks. Edmonton led the CFL in net offence (406.8 yards), offensive points (27.2 per game), offensive touchdowns (52) while allowing a league-low 29 sacks.

It was Ray's first 5,000-yard season since '08 and fourth of his career. He joins Hall of Famers Anthony Calvillo and Doug Flutie as the only players to reach that plateau four or more times.

Other winners included running back Andrew Harris (Canadian) and Stanley Bryant (lineman) of the Winnipeg Blue Bombers, linebacker Alex Singleton and kick-returner Roy Finch (special-teams) of the Stampeders as well as running back James Wilder Jr, (rookie) and Marc Trestman (coach) of the Argos.

Harris received 74 votes after posting a CFL-best 105 catches, the most ever by a running back. He also led the league in rushing (1,035 yards) as Winnipeg (12-6) earned its first home playoff game since 2011.

"I've always been told I was too slow, too Canadian," Harris said. "To be standing here is something to be proud of.

"Those negative things keep you inspired to keep moving forward."

Ottawa Redblacks receiver Brad Sinopoli, the '15 winner, was the finalist. The Peterborough, Ont., native had 91 catches for 1,009 yards with three TDs before suffering a season-ending shoulder injury.

The six-foot-five, 308-pound Bryant garnered 60 votes for anchoring a Winnipeg offensive line that created holes for Harris and protected quarterback Matt Nichols (4,472 yards, 28 TDs). The Bombers led the CFL in rushing (101.3 yards per game) and were second in offensive points (26.7 per game).

"It's a great honour," Bryant said. "It's one of the goals I set for myself at the start of the season.

"But I couldn't have done it without (Bombers offensive linemen). This award is also for those guys."

Toronto centre Sean McEwen, a Calgary native, was the finalist. The Argos lead the CFL in pass attempts (713) and completions (502) while finishing second in passing yards and net offence.

Singleton received 74 votes after recording 123 tackles _ most ever by a Canadian _ in his first full season as a starter. Calgary's defence allowed a league-low 349 points (19.4 per game) while recording 50 sacks and 45 turnovers.

"It's kind of for the whole defence," Singleton said. "The guys around me are incredible.

"This is awesome but winning Sunday and getting that team award is always first."

Montreal linebacker Kyries Hebert was the finalist. The 37-year-old was third overall in tackles (108), becoming the first player in CFL history over the age of 35 to surpass 100 tackles.

The five-foot-seven, 165-pound Finch had 61 votes after registering a club record-tying three punt return TDs and amassing a league-high 1,200 yards. But like Singleton, Finch said his focus remains on Sunday's game.

"I couldn't have this award without my teammates," Finch said. "But this is over with.

"I can't wait for practice (Friday) to prepare for the Grey Cup."

Ottawa's Diontae Spencer was the finalist. Spencer accumulated a CFL-record 496 all-purpose yards in a 41-36 win over Hamilton on Oct. 27.

The six-foot-three, 232-pound Wilder Jr. received 72 votes after running for 872 yards (7.2-yard average) and five TDs in 17 games _ 10 starts _ while adding 51 catches for 533 yards. Wilder Jr. recognized his offensive line by having every Argos lineman join him on the podium.

"These guys keep me going," he said. "The offensive line is behind the scenes all the time and never gets credit.

"These (awards) are great but I'm a team-first guy. We have something way bigger to bring back to the city of Toronto."

Trestman, 61, earned his second honour (first was in '09 with Montreal) with 54 votes. In his first year with Toronto, Trestman guided the Argos (9-9) to a Grey Cup berth following last year's 5-13 mark.

"I think that was great, James is a real guy," Trestman said. "It was unexpected but I was proud of him."

Calgary's Dave Dickenson, last year's winner, was the finalist. The Stampeders had a CFL-best 13-4-1 record and are making their second straight Grey Cup appearance.