CALGARY — Jason Maas doesn't regret his decision to send out Sean Whyte to kick a field goal down seven points with under two minutes to go in Sunday's West Division final.
0
Nov 19, 2017 10:03 PM By: Canadian Press 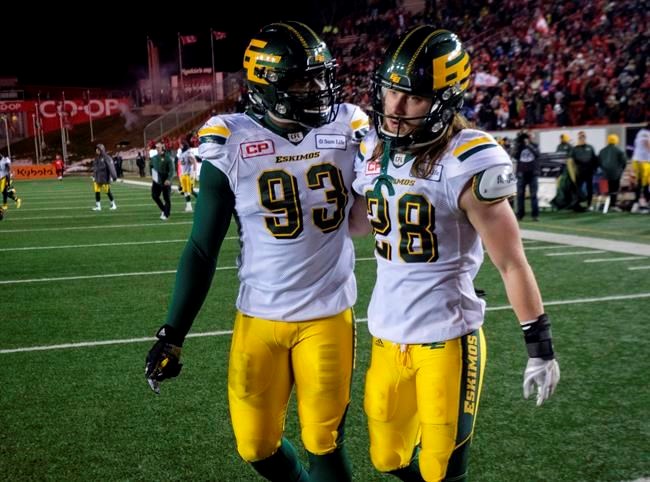 CALGARY — Jason Maas doesn't regret his decision to send out Sean Whyte to kick a field goal down seven points with under two minutes to go in Sunday's West Division final.

His hope was that his Edmonton Eskimos would eventually get the ball back and then drive for the game-winning touchdown, but that didn't happen as the Calgary Stampeders hung on for a 32-28 win to advance to next Sunday's Grey Cup final in Ottawa against the Toronto Argonauts.

"We've proved it in different spots all year that those things can happen. Ultimately in this one game, in this one moment, it didn't. At the end of the day we'll all live with it and it'll go down as a loss."

Maas' decision had the potential to pay off as the Eskimos forced Calgary to punt with 24 seconds remaining, but Edmonton's Jamill Smith fumbled the ball on the return and the Stampeders recovered to close out the win.

Edmonton quarterback Mike Reilly didn't question his coach's call to settle for the 20-yard field goal as the clock ran down to 1:43 on the play, rather than gambling on the third-and-four situation to extend the drive.

"I put faith in my coaching staff that they're going to make the best decision for us. I'll never question that," said Reilly, who converted a third-and-10 situation earlier in the drive when he threw a 31-yard pass to Brandon Zylstra.

"Everybody's going to have hindsight and question that decision, but at the end of the day I think the decision's made based on trying to win a football game, giving yourself three points, so that when you drive down and score with no time on the clock, you're winning, you're not going to overtime."

Whyte had his fair share of troubles on a windy afternoon as he missed a 42-yard field goal late the second quarter.

"I hit it dead straight and the last few feet it went hard left out of nowhere," explained Whyte, who finished with two field goals, three converts and a single. "Sometimes, you've got to just aim down the middle and hope for the best. It just didn't work out."

The Eskimos still managed put up a single point on the play, which wasn't the case when Whyte's 30-yard field goal attempt early in the third quarter hit the left upright and bounced back onto the field.

"I've played a lot in this stadium and that's some crazy wind to deal with," Maas said. "I don't think it was a factor. I think both teams moved the ball well and kicked the ball pretty well in it. It was definitely a circulating wind."

The Eskimos definitely had the start they wanted as C.J. Gable and Derel Walker scored touchdowns in the first quarter to give them an early 14-0 lead.

"That's not anything crazy obviously in the first quarter to have a 14-point lead on a great team like Calgary," said Reilly, who completed 23 of 38 passes for 348 yards, one touchdown and no interceptions. "That's obviously not going to hold up.

"You've got to be able to continue to put points on the board throughout the game. It felt like we hit a low as team — offence, defence, special teams, just as an entire group in the second and third quarter."

Canadian Laurent Duvernay-Tardif didn't need long to get into Super Bowl mode
Jan 21, 2020 9:24 PM
Comments
We welcome your feedback and encourage you to share your thoughts on this story. We ask that you be respectful of others and their points of view, refrain from personal attacks and stay on topic. To learn about our commenting policies and how we moderate, please read our Community Guidelines.