TORONTO — T.J. Oshie and Tom Wilson scored, Braden Holtby made 30 saves and the Washington Capitals beat the Boston Bruins 2-1 in round-robin play Sunday to clinch the No.
Aug 9, 2020 3:05 PM By: Canadian Press 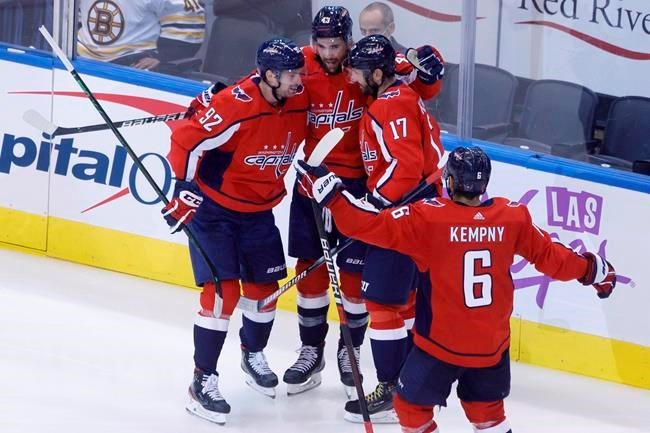 TORONTO — T.J. Oshie and Tom Wilson scored, Braden Holtby made 30 saves and the Washington Capitals beat the Boston Bruins 2-1 in round-robin play Sunday to clinch the No. 3 seed in the Eastern Conference and set up a first-round matchup against former coach Barry Trotz's New York Islanders.

Boston, which won the Presidents' Trophy as the top team during the NHL regular season that was cut short in March, lost all three of its seeding games and fell to fourth in the East. The Bruins will face the Carolina Hurricanes in the first round in a rematch of the 2019 East final.

“Our top line, they’ve been held off the score sheet and I believe it’s going to be a tough task for Carolina to do that on a consistent basis,” Boston coach Bruce Cassidy said of the trio of Brad Marchand, Patrice Bergeron and top goal-scorer David Pastrnak. “I think that those guys will be able to get their game going, but we’re going to need that primary scoring.”

Trotz coached Washington to its first Stanley Cup title in franchise history in 2018, then left in a contract dispute. Trotz went to the Islanders, while the Capitals hired his top assistant, Todd Reirden, as head coach. This is the first time they've faced off in a playoff series since.

"I think it will be a hell of a series," Trotz said. “Both teams are well-equipped to go at each other.”

Washington shook off a shootout loss to Tampa Bay and a regulation loss to Philadelphia to continue its years-long dominance of Boston. The Capitals have now won 17 of their past 19 games against the Bruins and by earning the third seed cannot play the top-seeded Flyers until the conference final.

“I think we're building our game,” Wilson said. “We're feeling good about it. We've got to keep building.”

It's unclear whether Norris Trophy finalist John Carlson will be ready for Game 1 against the Islanders after missing the all of round-robin play with an injury. The 30-year-old went down to the ice awkwardly in Washington’s exhibition game vs. Carolina on July 29 and has practiced but not played since.

Jake DeBrusk scored and Tuukka Rask made 23 saves for Boston, which also got an assist from winger Ondrej Kase in his round-robin debut.

NOTES: With Carlson still out, rookie Martin Fehervary made his round-robin debut, replacing Radko Gudas on the Capitals blue line. ... Connor Clifton played on for the Bruins in place of Matt Grzelcyk.

Dickerson homers as Marlins beat Cubs 5-1 in playoff opener
Sep 30, 2020 9:24 PM
Comments
We welcome your feedback and encourage you to share your thoughts. We ask that you be respectful of others and their points of view, refrain from personal attacks and stay on topic. To learn about our commenting policies and how we moderate, please read our Community Guidelines.