MONTREAL — For a third year in a row, the Montreal Alouettes have changed coaches in the middle of the season.
0
Sep 13, 2017 5:19 PM By: Canadian Press 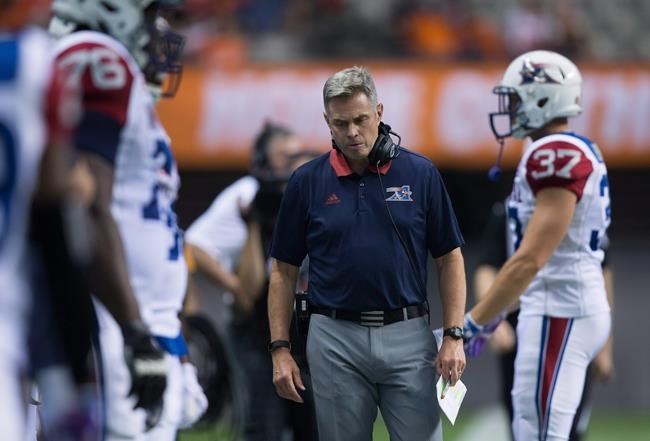 MONTREAL — For a third year in a row, the Montreal Alouettes have changed coaches in the middle of the season.

With his team mired in a four-game losing streak, general manager Kavis Reed took over as head coach on Wednesday after sacking Jacques Chapdelaine as well as defensive co-ordinator/assistant head coach Noel Thorpe.

The revamped staff gets its first test when the Ottawa Redblacks visit Percival Molson Stadium on Sunday.

The changes came with the 3-8 Alouettes sinking fast and in danger of missing the playoffs for a third year in a row. The offence was a mess, managing no more than six points of two of its last four games, and Reed described the defence, which has been the club's backbone in recent years, as "just OK."

But it was still a surprise if only because the Alouettes had done the same in 2015, when former GM Jim Popp replaced Tom Higgins in mid-season, and last year, when Chapdelaine took over coaching duties from Popp.

They had also changed coaches during the 2013 campaign, with Popp stepping in for Dan Hawkins.

Few expected them to do it again.

"It's a tough situation," said quarterback Darian Durant. "You respect those guys, but it's a tough business we're in.

"As a team I think we have enough veterans to keep the guys going and keep the room upbeat. We have to move on."

The team that had been a model of success and stability from the late 1990s to 2012, winning three Grey Cups, now looks to have gone off the rails.

Reed would not go into specifics on why he fired the two coaches, but numbers talk and the team ranks near the bottom in most statistical categories, especially on offence.

"This is to establish a foundation," said Reed. "The Montreal Alouettes have been a proud organization and if there is a foundational crack, we cannot continue to try to build a house on it.

"That's what I feel has happened. This is an opportunity for us to correct the foundation."

Nothing has gone right for the Alouettes these days. Reed was to speak to the media on the sidelines before practice, but someone forgot the key so it was held outside the locked gate.

And the moves could not have come at a more difficult time for Calvillo, the quarterback legend who is to be inducted into the Canadian Football Hall of Fame on Thursday night in Hamilton.

Calvillo said his new duties mean he can't go, although Reed said he would insist that he attend.

Calvillo was offensive co-ordinator last season, but had those duties taken over by Chapdelaine. Now he'll get a second chance to run the offence.

"I felt very comfortable last year calling plays," said Calvillo. "I tried this year to pretend I was an offensive co-ordinator, in terms of game planning, creating my own call sheets, just to be able to grow and not waste this year.

"I've been trying mentally to keep myself involved as a play-caller."

Reed said new coaches would be added soon and that Chapdelaine's son Justin would stay on as receivers coach.

The moves came a day after team co-owner Andrew Wetenhall warned there may be changes if the club does not start winning games.

Chapdelaine was promoted to interim head coach when Popp was removed last September with the team mired in last place at 3-9. He took them to a 4-2 record over the final six games, but it was not enough to secure a playoff spot.

The interim tag on his job title was removed for this season while Reed, who had been special teams co-ordinator, was handed the general manager's job.

Now Reed, a former Edmonton Eskimos head coach, has stepped in to replace his fired coach, although he doesn't intend to stay on the sidelines beyond this season.

"Regardless of what happens, the franchise will have a head coach and it won't be me," he said.

Thorpe was with the Alouettes on and off since 2002. Defence has been the team's main strength since he took over as co-ordinator in 2013.

"Everything's relative," Reed said. "If it's just OK, we're not going to be able to have the kind of team we want. Just OK is not enough. We felt our defence was good but never one you would call elite."

"We never pride ourselves on being OK," said linebacker Kyries Hebert. "I don't do OK.

"If that's how Kavis sees it, he's asking for more and we're going to have to produce more."

Thoroughbreds are finally off and running at Woodbine Racetrack in Toronto
Jun 6, 2020 7:27 PM

'A huge moment for us': NHL exec. on players speaking out about social justice
Jun 6, 2020 12:19 PM
Comments
We welcome your feedback and encourage you to share your thoughts. We ask that you be respectful of others and their points of view, refrain from personal attacks and stay on topic. To learn about our commenting policies and how we moderate, please read our Community Guidelines.