Trump COVID test and military exports: In The News for Oct. 2

In The News is a roundup of stories from The Canadian Press designed to kickstart your day. Here is what's on the radar of our editors for the morning of Oct. 2 ... What we are watching today ...
Oct 2, 2020 8:04 AM By: Canadian Press 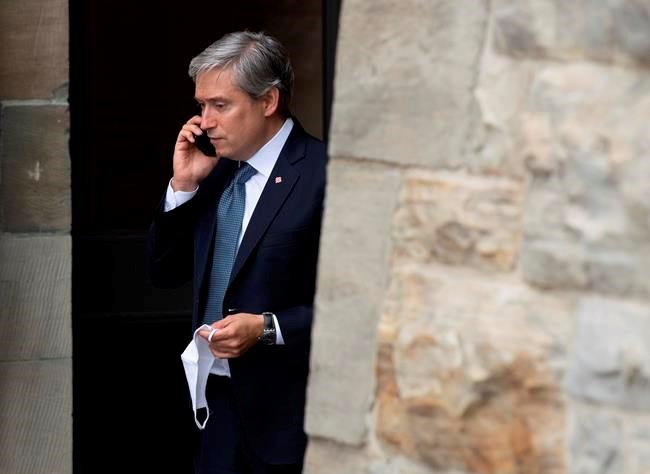 In The News is a roundup of stories from The Canadian Press designed to kickstart your day. Here is what's on the radar of our editors for the morning of Oct. 2 ...

What we are watching today ...

President Donald Trump said early Friday that he and first lady Melania Trump have tested positive for the coronavirus, a stunning announcement that plunges the country deeper into uncertainty just a month before the presidential election.

Trump, who has spent much of the year downplaying the threat of a virus that has killed more than 205,000 Americans, said he and Mrs. Trump were quarantining. The White House physician said the president is expected to continue carrying out his duties "without disruption" while recovering.

Still, Trump's diagnosis was sure to have a destabilizing effect in Washington, raising questions about how far the virus had spread through the highest levels of the U.S. government. Hours before Trump announced he had contracted the virus, the White House said a top aide who had with him during the week had tested positive.

"Tonight, @FLOTUS and I tested positive for COVID-19. We will begin our quarantine and recovery process immediately," Trump tweeted just before 1 a.m. "We will get through this TOGETHER!"

Trump was last seen by reporters returning to the White House on Thursday evening and did not appear visibly ill. Trump is 74 years old, putting him at higher risk of serious complications from a virus that has infected more than 7 million people nationwide.

The president's physician said in a memo that Trump and the first lady, who is 50, "are both well at this time" and "plan to remain at home within the White House during their convalescence."

The diagnosis marks a devastating blow for a president who has been trying desperately to convince the American public that the worst of the pandemic is behind them. In the best of cases, if he develops no symptoms, which can include fever, cough and breathing trouble, it will force him off the campaign trail just weeks before the election.

Trump's handling of the pandemic has already been a major flashpoint in his race against Democrat Joe Biden, who spent much of the summer off the campaign trail and at his home in Delaware because of the virus. Biden has since resumed a more active campaign schedule, but with small, socially distanced crowds. He also regularly wears a mask in public, something Trump mocked him for at Tuesday night’s debate.

Champagne made the pledge in an interview with The Canadian Press as Turkey faces allegations it is involved in this week’s renewed fighting between Armenia and Azerbaijan.

He was responding to calls from arms-control watchdogs, Armenian Canadians and New Democrats to suspend the export of a targeting sensor made by a Burlington, Ont., company that is allegedly being used in Turkish attack drones.

Turkey, a member of NATO with Canada, has said it supports Azerbaijan in renewed fighting with Armenia that broke out Sunday in a disputed region in the South Caucasus separatist region of Nagorno-Karabakh.

Armenia has accused Turkey of redeploying fighters from Syria and F-16 fighter jets to support Azerbaijani forces, but Turkey has denied sending people or arms to the conflict.

Champagne and his British counterpart, Dominic Raab, have expressed concern over the wide-scale military action between Armenia and Azerbaijan and are calling on them to peacefully negotiate through the Organization for Security and Co-operation in Europe.

What we are watching in the rest of the world ...

One by one, leaders and ministers from over 100 nations admitted that 25 years after the adoption of a road map to achieve equality for women not a single country has reached that goal — and many warned that instead of progress there is now push back. French President Emmanuel Macron put it bluntly, "women's rights are under attack."

Addressing a high-level meeting to commemorate the landmark 1995 UN women's conference in Beijing on Thursday, Macron said it's no secret that the 150-page blueprint to realize gender equality approved by 189 nations in the Chinese capital "would have no chance of being adopted" in 2020.

So "this is no time for commemoration or self-congratulation," he warned, because progress achieved by women "is being undermined, even in our democracies."

The Beijing declaration and platform called for bold action in 12 areas for women and girls, including combating poverty and gender-based violence, ensuring all girls get an education and putting women at top levels of business and government, as well as at peacemaking tables. It also said, for the first time in a UN document, that women's human rights include the right to control and decide "on matters relating to their sexuality, including their sexual and reproductive health, free of discrimination, coercion and violence."

Macron said in his prerecorded speech that progress is being undercut "starting with the freedom for women to control their own bodies, and in particular the right to abortion." And he cited continuing inequalities in schooling, pay, domestic work, and political representation.

In today's more divided, conservative and still very male-dominated societies, he said, "we have seen around the world a pushback against gender equality and women's rights."

Canadian Donna Strickland became only the third woman to win the Nobel Prize for Physics when she shared the prize with a French colleague and an American scientist. The associate professor at the University of Waterloo in Ontario and Gerard Mourou were honoured for their work in the field of pulsed lasers. Arthur Ashkin developed "optical tweezers" that can grab tiny particles such as viruses without damaging them.

Dr. Amy Tan has worked as a family physician in Alberta for 16 years.

Tan, who practices at a teaching clinic and provides palliative care in Calgary, had planned to keep working in the province for many more — at least until her 11-year old son finished high school.

But she said her plans changed in the spring when a prolonged and bitter dispute began between the United Conservative government and the province's doctors.

"I'm very grateful I have the choice, when I know a lot of my colleagues and other Albertans don't," Tan said in a phone interview from Calgary.

"The truth of the matter is I wouldn't have pursued other opportunities had it not been for what's going on."

Tan said she loves her work in Calgary, but it couldn't buffer her from the political fight — particularly during the COVID-19 pandemic.

The dispute started in February when Health Minister Tyler Shandro tore up a master pay agreement with the Alberta Medical Association.

Total physician compensation remains flat at $5.4 billion in the government's 2020-21 budget, but a new funding framework changes how doctors are paid.

Doctors have said it will force hundreds of clinics across the province, particularly in rural areas, to reduce staff or close.

Some changes were reversed during the pandemic, but a July survey by the medical association showed at least 40 per cent of physicians have considered moving out of the province.

Shandro has called it questionable that doctors would leave for other provinces, where they would earn less money. His press secretary, Steve Buick, added this week that he doesn't believe the "rhetoric" that doctors are leaving.

He says the province doesn't match his values in public health care.

This report by The Canadian Press was first published Oct. 2, 2020