Here is the latest news on protests across Canada over a natural gas pipeline project in British Columbia (All times Eastern): 9:15 p.m. ET A meeting between Wet'suwet'en hereditary chiefs and federal and B.C.
0
Feb 27, 2020 9:31 PM By: Canadian Press 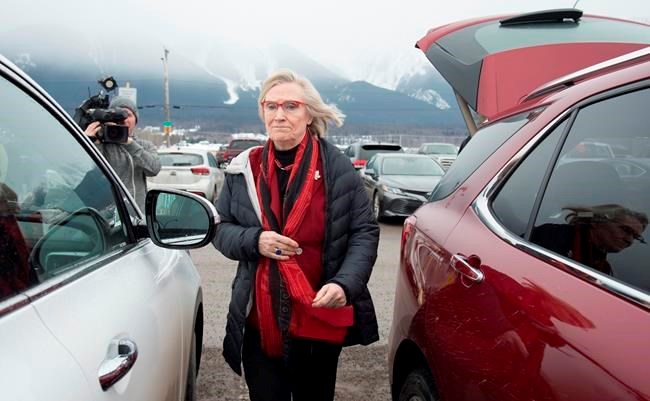 Here is the latest news on protests across Canada over a natural gas pipeline project in British Columbia (All times Eastern):

A meeting between Wet'suwet'en hereditary chiefs and federal and B.C. ministers has ended for the day in Smithers, B.C., with a plan to resume Friday morning.

Fraser says the talks were productive and the mood in the room was respectful, while Bennett adds it was a very good start.

Freda Huson, spokeswoman for the Unist'ot'en camp that has been set up near a Coastal GasLink pipeline work site, says the meeting covered introductions and was respectful.

Wet'suwet'en member Bonnie George, who supports the pipeline, wasn't invited to the meeting but says she and others entered the room and read a statement that said the entire nation needs to be represented and not just a small fraction.

She says the statement caused a "little bit of tension" but a majority of those in the meeting were respectful and she believes it's a first step towards reconciliation.

About a dozen supporters of the Coastal GasLink pipeline gathered outside the Office of the Wet'suwet'en where hereditary chiefs were meeting with federal and B.C. ministers.

Bonnie George, a former Coastal GasLink employee who describes herself as a Wet'suwet'en matriarch, handed out a statement that she attributed to the Wet'suwet'en people.

The statement says the public attention is having a negative effect on the community and eroding its traditional ways.

George also says hereditary chiefs are not decision-makers on their own but are rather meant to reflect the consensus of their clan or house and reach decisions together inside a traditional setting called a Feast House.

She adds that the Wet'suwet'en name should never be associated with protest because they are "peaceful people."

A long-sought meeting between Wet'suwet'en hereditary chiefs and the federal and B.C. Indigenous relations ministers is underway in Smithers, B.C.

Carolyn Bennett and Scott Fraser arrived separately for the meeting, starting talks in a pipeline dispute that has prompted disruptive rail blockades across the country.

Fraser said little to reporters as he arrived, stressing that he wants to make sure the discussions work.

He also says he's happy that the meeting is taking place after a "miscommunication" spread word Wednesday that the talks were cancelled.

British Columbia Premier John Horgan says he has met with Wet'suwet'en hereditary chiefs twice over the past year and a half and is absolutely prepared to sit down with them again.

But he says there need to be conditions for constructive dialogue and the best way forward is for the provincial and federal Indigenous relations ministers to be at the table.

The chiefs are set to meet with those ministers, Scott Fraser and Carolyn Bennett respectively, this afternoon.

Horgan describes the meeting, set to take place in Smithers, B.C., as a good step that he hopes will lead to greater harmony.

Horgan also describes the impasse over the Coastal GasLink pipeline in northern B.C. as his biggest challenge to date as premier "without a doubt."

Victoria police say two protesters were arrested for mischief at the B.C. legislature grounds this morning.

Osoko says protesters wrote some messages that included profanity, and efforts are underway to determine what the substance is and how to clean it.

He adds officers remain on site and working to ensure protests are safe, peaceful and lawful, adding mischief investigations are ongoing.

Coastal GasLink, the company at the centre of a dispute over construction of a natural gas pipeline across northern British Columbia, says it has agreed to pause activities for two days along a remote road over the traditional territories of the Wet'suwet'en First Nation.

Hereditary chiefs have been demanding Coastal GasLink workers leave the area as a precondition for talks with federal and provincial politicians.

A statement from Coastal GasLink says its pause in construction is expected to begin when talks begin between the hereditary chiefs, Canada's minister of Crown-Indigenous Relations and her B.C. counterpart.

Those talks are slated to get underway later today.

Coastal GasLink says it fully supports the efforts of all parties and is committed to finding a peaceful resolution to the current issues.

RCMP in British Columbia say an agreement has been reached with Wet'suwet'en hereditary chiefs that will keep Mounties out of the chiefs' traditional territories at least while talks are underway with the federal and provincial governments.

A statement issued by the RCMP says senior officers have been "actively engaged" in discussions with the chiefs over the last week.

Police say the chiefs have agreed not to interfere with anyone using a remote logging road southwest of Houston, B.C. that leads to the construction site of the Coastal GasLink natural gas pipeline.

In exchange, RCMP have agreed to stop patrols along the road while the chiefs hold talks with senior federal and provincial ministers.

The chiefs say in a statement they agreed to meet with Carolyn Bennett and Scott Fraser, the ministers responsible for Indigenous relations, "as a first step."

The chiefs thank their supporters in the statement for their "tireless dedication" and say they now need time to have discussions in an atmosphere of respect.

They say they have committed to keep the road free of obstructions during the talks for the passage of Wet'suwet'en people and their guests without interference.

Canada's minister of Crown-Indigenous relations says she is looking forward to a meeting this afternoon with hereditary chiefs of the Wet'suwet'en First Nation.

Carolyn Bennett made the comments at the Smithers airport after arriving on a flight from Vancouver.

She says it's very important to "reaffirm" the interest of senior levels of government in speaking with the First Nation about title and rights.

Today's meeting is being held in Smithers where the office of the hereditary house chiefs is located, and meetings are scheduled to continue Friday.

British Columbia's minister in charge of Indigenous relations says he is on his way to meet with Wet'suwet'en hereditary chiefs and his federal counterpart.

Scott Fraser says in a statement that he is pleased to have been able to arrange talks with the chiefs who oppose a natural gas pipeline through their traditional territory.

He says he is going to the meeting in the town of Smithers with a commitment to respectful dialogue and is focused on finding a peaceful path forward.

Fraser met with the chiefs early this month but they were unable to reach an agreement over the pipeline impasse.

The RCMP enforced an injunction against Wet'suwet'en protesters after the talks ended, triggering a wave of solidarity protests that has halted rail traffic in parts of Canada.

The parliamentary secretary for Public Safety Minister Bill Blair is calling for all levels of government to temper their words when discussing the ongoing protests.

Joel Lightbound's comments in Ottawa come a day after Quebec Premier Francois Legault suggested people on a reserve where one of the protests is taking place are armed.

Lightbound declined to comment specifically on Legault's comments but says everyone would benefit from using calming language.

He says talks between the federal and British Columbia governments and the Wet'suwet'en hereditary chiefs later today are a positive sign.

Canada's transport minister says the meeting set for this afternoon between Wet'suwet'en hereditary chiefs and the federal and British Columbia governments is very important.

Marc Garneau says both sides have been seeking the meeting for some time.

He describes it as an important starting point for the shared goal of peacefully resolving conflict over the planned natural gas pipeline crossing traditional Wet'suwet'en territory.

The meeting is set to get underway in Smithers, B.C., later today.

The federal minister of Crown-Indigenous relations is on her way to a meeting with Wet'suwet'en hereditary chiefs in Smithers, B.C.

Carolyn Bennett posted a message on social media this morning confirming she arrived in Vancouver last night for a flight to Smithers this morning.

Bennett and British Columbia's Minister of Indigenous Relations and Reconciliation, Scott Fraser, are taking part in the talks that are expected to continue through tomorrow.

About 20 demonstrators have gathered near train tracks in Kingston, Ont.

Const. Ash Gutheinz says train traffic has not been affected and officers are monitoring the situation.

A Conservative member of the House of Commons public safety and national security committee wants the government to clarify whether rail blockades in Quebec and Ontario amount to acts of terrorism, meaning RCMP could immediately intervene.

Conservative MP Doug Shipley raised the issue during testimony before the committee this morning after a handful of demonstrators lit fires on or beside rail tracks Wednesday, prompting condemnations from Prime Minister Justin Trudeau and his cabinet.

Public Safety Minister Bill Blair says it's not appropriate for him to make a decision about terrorism because police must decide if protesters' conduct reaches that threshold, but he says he's deeply concerned by their actions.

A meeting is expected to go ahead today between Wet'suwet'en hereditary chiefs and the federal and British Columbia governments.

Chief Na'Moks, one of five hereditary chiefs opposed to construction of the Coastal GasLink pipeline across Wet'suwet'en traditional territories, says the meeting should begin this afternoon and continue Friday.

There was word late Wednesday that the meeting had been cancelled, but Na'Moks, who also goes by John Ridsdale, says he was told the cancellation was a "miscommunication."

B.C. Premier John Horgan initially called word of the cancellation unfortunate and after Indigenous leaders said the meeting would proceed a spokesman for the premier said the report was promising, but the province says it won't be in a position to confirm the gathering until later this morning.

This report by The Canadian Press was first published Feb. 27, 2020.

Trudeau to talk to Trump about COVID masks after White House bars export
Apr 4, 2020 12:17 PM
Comments
We welcome your feedback and encourage you to share your thoughts on this story. We ask that you be respectful of others and their points of view, refrain from personal attacks and stay on topic. To learn about our commenting policies and how we moderate, please read our Community Guidelines.