TORONTO — Ontario now has a sixth confirmed case of the novel coronavirus, and while it is the first instance in the province of human-to-human transmission, health officials say the risk is still low.
0
Feb 27, 2020 4:55 PM By: Canadian Press 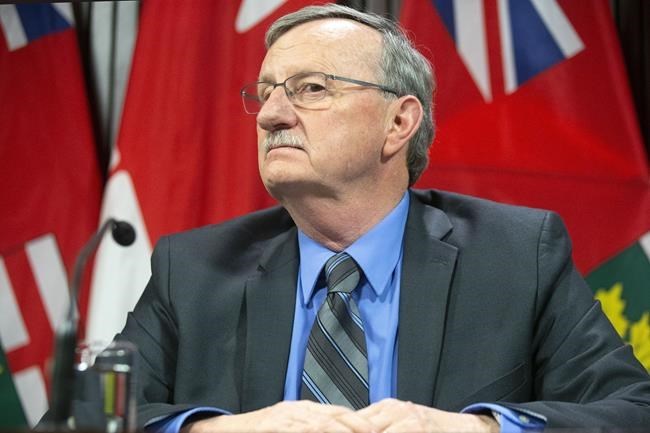 TORONTO — Ontario now has a sixth confirmed case of the novel coronavirus, and while it is the first instance in the province of human-to-human transmission, health officials say the risk is still low.

The man in his 60s is the husband of the province's fifth case — a woman who had recently been to Iran, said Dr. David Williams, Ontario's chief medical officer of health.

The husband was not in Iran with his wife, and health officials said this marks the first time Ontario has seen a case of human-to-human transmission — the patients in all of the other cases had a recent travel history to China.

While China has been the epicentre of the outbreak of the virus known as COVID-19, Iran is now experiencing one of the worst outbreaks outside of China, with 254 people infected and 26 dead.

Both the husband and wife are in self-isolation at home in Toronto and are doing well, said Dr. Eileen de Villa, Toronto's medical officer of health. The only symptoms the man had were a mild cough and self-reported fever.

More than 81,000 cases of COVID-19 have occurred around the world since the virus emerged in China, but Ontario health officials say the risk to the general public in Canada is low.

"At this time the virus is not circulating locally, however, given the global circumstances we are actively working with our city and health partners to plan for the potential of local spread," de Villa said.

Dr. Williams said health authorities remain vigilant, but there is no cause for fear in the general public. The data from China shows that most of the spread has been to close contacts, most infected people have fairly mild and short-lived symptoms — particularly younger people — and the deaths have been in older people with underlying health conditions, he said.

"Before there's widespread panic and that kind of stuff, look at the evidence," Williams said, noting the mortality rate is less than that of the flu.

This report by The Canadian Press was first published Feb. 27, 2020

Trudeau to talk to Trump about COVID masks after White House bars export
Apr 4, 2020 2:10 PM
Comments
We welcome your feedback and encourage you to share your thoughts on this story. We ask that you be respectful of others and their points of view, refrain from personal attacks and stay on topic. To learn about our commenting policies and how we moderate, please read our Community Guidelines.