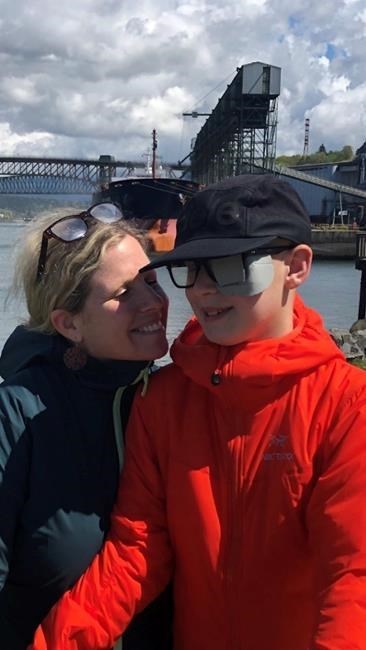 Canada is the only G7 country without a clinical proton facility — a situation that forces families to travel to the United States to seek a treatment that has been around for about a decade.

Canadians should have access to the advanced level of care that comes from proton beam therapy, said Chris Collins, chair of Advocacy for Canadian Childhood Oncology Research Network, or Ac2orn.

"This is an important and proven technology and medical treatment," Collins said in a recent interview.

Proton radiotherapy uses a beam of protons to irradiate cancerous tissue in children and adults. In comparison to conventional radiation therapy, proton therapy delivers a higher concentration of radiation without affecting nearby organs.

Collins is a former speaker of the New Brunswick legislature who lost his 13-year-old son Sean to cancer in 2007. He said the COVID-19 pandemic is making it more difficult for families to travel to the United States for treatment.

He said the pandemic is exposing an inequity in the health-care system that would be largely addressed if there were a Canadian option.

"Proportionally, it would be good to have a centre in Vancouver, Montreal and Toronto, and to fund families who are travelling to these places," he said.

Kimberley Berger, of Vancouver, knows how difficult it can be to access the treatment her 12-year-old son Jonah received at a private clinic in Seattle, Wash., last February.

While the B.C. health system funded the treatment, the family was on its own to pay their accommodations during the six weeks her son received proton therapy and chemotherapy following surgery for a brain tumour.

"My immediate thought when this happened was, 'how are we going to do this?'" Berger said. "I have another son and my husband is working, we have to rent a home in another city and that is expensive."

She said dealing with a foreign health system was an added stress.

"You don't know how the system works and then throw a pandemic on top of it," she said in a recent interview. "The pandemic drives it home that we need to be sustainable in Canada when something like this does happen."

Dr. Jim Whitlock, division head of haematology and oncology at SickKids hospital in Toronto, said proton therapy is a particularly effective option for children who have brain tumours or other types of cancer.

Proton therapy, he said, is preferable for patients who have tumours at the base of the skull: "A tricky area to try to radiate and not cause damage."

Whitlock said the up-front capital costs — estimated between $75 million and $250 million — are the main hurdle to building a proton centre in Canada.

He said there should be at least one national facility, adding that any province that decides to build one will need the help of the federal government.

The vision of building centres of excellent for expensive and uncommon therapies is one "Canada needs to embrace as a nation," Whitlock said. "I hope the federal government will consider taking a more active role in helping address these national needs because some of these problems need to be solved at a national level."

According to Health Canada, proton beam therapy systems are rated as Class III devices under federal regulations, meaning they must be licenced prior to importation or sale in the country.

"While Health Canada is responsible for assessing the safety, effectiveness and quality of medical devices, the availability, its use, and the funding of proton therapy in Canada fall under the responsibility of the provinces and territories," the department said in an email.

Dr. Rob Rutledge, a radiation oncologist at the Nova Scotia Cancer Centre in Halifax, agrees that money is the issue.

Currently, the handful of patients in the Maritimes who qualify for the proton treatment are sent to the United States. But Nova Scotia, which funds the treatment, is looking at referring some patients to the Netherlands, a country Rutledge said has "excellent technology at a fraction of the cost."

Proton treatment, however, needs to be offered to some children with brain tumours in Canada, Rutledge said, adding that the non-availability of the procedure exposes a gap in the health system.

"Pandemic aside, we need this treatment."

This report by The Canadian Press was first published Oct. 4, 2020.