FREDERICTON — New Brunswickers turned out in unusually high numbers for advance voting this weekend, with the province's chief electoral officer saying she believes people are eager to avoid election day lineups during a pandemic.
Sep 6, 2020 1:23 PM By: Canadian Press 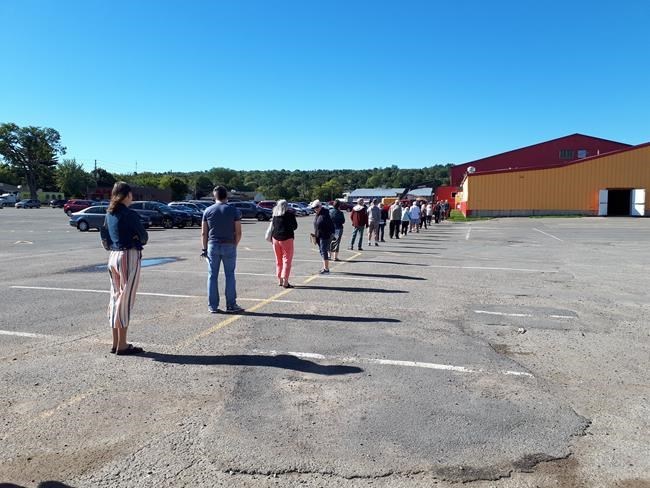 FREDERICTON — New Brunswickers turned out in unusually high numbers for advance voting this weekend, with the province's chief electoral officer saying she believes people are eager to avoid election day lineups during a pandemic.

That's about 17 per cent of the roughly 380,000 people who turned out to vote in the last election, held at a similar time of year.

Poffenroth attributes the strong turnout partly to an Elections New Brunswick campaign that urged early voting in order to avoid lineups due to social distancing rules being applied at polling stations.

Videos posted on social media have urged electors to "keep the curve flat," by voting early during the two days of advance polling. The second day will be Tuesday.

The advertising also reminded voters they can vote early by mail-in ballots or at their local returning office.

"The message was received and acted upon," Poffenroth said in an interview Sunday.

"It's the one thing voters can do to reduce risk. They can vote early to spread out the number of people at the polls through a number of different opportunities."

Poffenroth said New Brunswick's experience is being watched with interest by election officials across the country, with a provincial vote coming in Saskatchewan next month, and the possibility of a fall federal election also on the horizon.

So far, she said, voters have been willing to take advantage of various methods of avoiding lineups.

There have been increases in people voting via mail-in ballots and at returning offices, with about 36,000 people having voted by those two methods and through ballots provided to long-term care residents as of 3 p.m. on Saturday.

Poffenroth said other jurisdictions should expect a similar surge in interest in early voting, and ensure they have methods to efficiently distribute mail-in ballots to older and vulnerable electors who don't want to vote in person.

"In New Brunswick, we've had a very, very short campaign period — the minimum 28 days. So we've had a very condensed period in which to get those applications out to people and get their ballots back," she said.

The electoral officer said her team has had to use courier services and other innovations to ensure people requesting the mail-in ballots receive them in time to vote.

Poffenroth also said one of the early lessons learned from holding an election during COVID-19 is that legislative change is needed to allow electoral officers more powers to allow early voting.

She's bound by law to only allow two days of advance voting, but said if she'd had the option, she would have considered increasing that number.

"Legislators should be considering giving some flexibility in the case of a public health emergency such as we're in now," she said.

— by Michael Tutton in Halifax.