LOS ANGELES — Already playing without top centre Matt Duchene, the Ottawa Senators could have thrown in the towel when Colin White sustained an injury early in the first period against the Los Angeles Kings.
0
Jan 11, 2019 3:11 AM By: Canadian Press 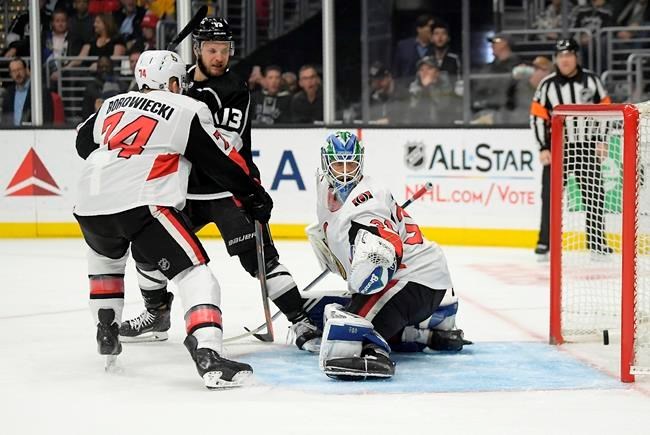 LOS ANGELES — Already playing without top Matt Duchene, the Ottawa Senators could have thrown in the towel when Colin White sustained an injury early in the first period against the Los Angeles Kings.

Instead, the young Senators showed their mettle to win consecutive road games for the first time this season.

Chris Tierney scored twice and the Senators beat the Kings 4-1 on Thursday night.

"Obviously Colin going down early, a lot of guys had to step up and play some big minutes, so I thought the whole team gave a 60-minutes effort," Tierney said. "Every forward, every D, goalie, everybody was going."

Bobby Ryan had a power-play goal and Christian Wolanin also scored for the Senators, who won on back-to-back nights at Anaheim and Los Angeles. Anders Nilsson made 33 saves.

"Over time we're going to gain that maturity," Ottawa coach Guy Boucher said. "That's experience, and you can't just ask for it and get it when you got such a young team. You can see it, pretty much everybody is growing."

Ottawa also got its first consecutive wins since a three-game streak Nov. 27-Dec. 1 despite losing White to an apparent upper-body injury on a check from Jake Muzzin.

Boucher said White will return to Ottawa for further examination and would miss at least two weeks.

"It was a major character win," Boucher said. "It looked like we weren't going to get much of a chance tonight, but our guys did a terrific job."

The Senators took the lead by scoring two goals 2:41 apart in the second period. Tierney put the Senators ahead 2-1 at 16:40 after Ryan scored on the power play at 14:59 to tie it at 1 and extend his point streak to six games.

Mikkel Boedker got his 200th career assist on Tierney's goal.

Wolanin made it 3-1 at 1:22 of the third period. Tierney added an empty-netter at 19:02, giving him five points in his past three games.

Tierney was equally pleased with the defensive effort, holding the Ducks and Kings to one goal each after allowing at least four goals seven times during an eight-game losing streak.

Nilsson, who was traded from Vancouver to Ottawa on Jan. 2, did his part by stopping 65 of 67 shots against the two Southern California teams.

"I thought we tweaked a couple things coming into this road trip and been paying off so far obviously," Tierney said. "But you got to give a lot of credit to Nilly, he made a couple huge saves. Both games now he's made timely saves that kept the game in reach and kept us with the lead here tonight."

Kyle Clifford scored and Jonathan Quick made 23 saves for the Kings.

The Kings went up 1-0 at 3:47 of the second period when Clifford redirected Muzzin's shot. Clifford's second goal in the past three games was little consolation for what he descried as an "awful" performance by the reeling Kings, who have lost four of five.

"That's just embarrassing to be honest," Clifford said. "There's not much more to say other than that."

NOTES: Senators D Ben Harpur, who did not play because of an upper-body injury, is also set to return to Ottawa for further examination. Boucher said Harpur will miss at least two weeks. ... Duchene is not expected to rejoin the team for the conclusion of their three-game California trip at San Jose on Saturday following the birth of his son. ... Kings D Alec Martinez returned after missing 14 games because of an upper-body injury.