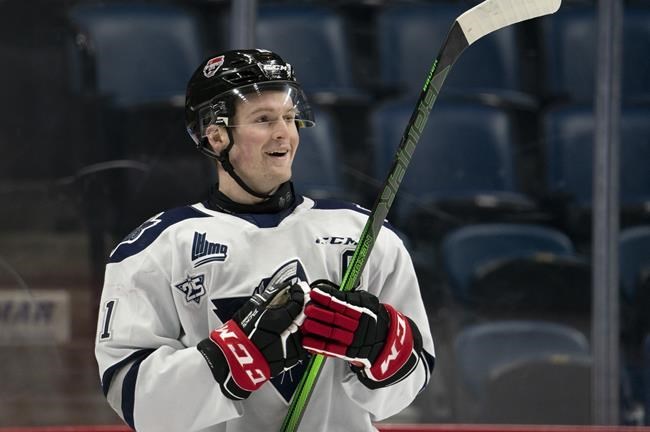 Lafreniere, a left-wing with the Rimouski Oceanic, was leading the Quebec Major Junior Hockey League with 112 points (35 goals, 77 assists) in 34 games when the league cancelled the remainder of its 2019-20 season on March 17 due to the COVID-19 pandemic.

QMJHL skaters with 35-77—112 in 52 GP in 2019-20 and was a standout at the 2020 World Junior Championship where he was named Most Valuable Player and Best Forward after averaging two points per game for Team Canada (4-6—10 in 5 GP) to help his country capture the gold medal.

He was also a standout standout at the 2020 junior hockey championship, where he was named most valuable player and best forward. He had four goals and six assists in 10 games to help Canada capture the gold medal in Ostrava, Czech Republic.

Forward Quinton Byfield of the Ontario Hockey League's Sudbury Wolves finished with the No. 2 rank, followed by defenceman Jamie Drysdale of the OHL's Erie Otters. Both were Lafreniere's teammates at the world juniors. Defenceman Jake Sanderson (US under-18 team) and centre Cole Perfetti (Saginaw Spirit, OHL) rounded out the top five.

The 2020 draft was originally scheduled to be held June 26-27 at the Bell Centre in Montreal but has been postponed due to the ongoing uncertainty resulting from the novel coronavirus. The location, timing and format of the draft will be announced when details are finalized.

If selected first overall, Lafreniere would become the first Quebec-born player taken No. 1 since Vegas goaltender Marc-Andre Fleury in 2003 and first Canadian-born player to be taken with the first overall pick since Edmonton captain Connor McDavid in 2015.

Sharks have plenty of time to stew over down season
May 28, 2020 6:25 PM
Hurricanes agree to arena lease extension through July 2029
May 28, 2020 6:13 PM
Connor McDavid on NHL format: 'Not perfect, but it's the best we got'
May 28, 2020 5:50 PM
Comments
We welcome your feedback and encourage you to share your thoughts. We ask that you be respectful of others and their points of view, refrain from personal attacks and stay on topic. To learn about our commenting policies and how we moderate, please read our Community Guidelines.