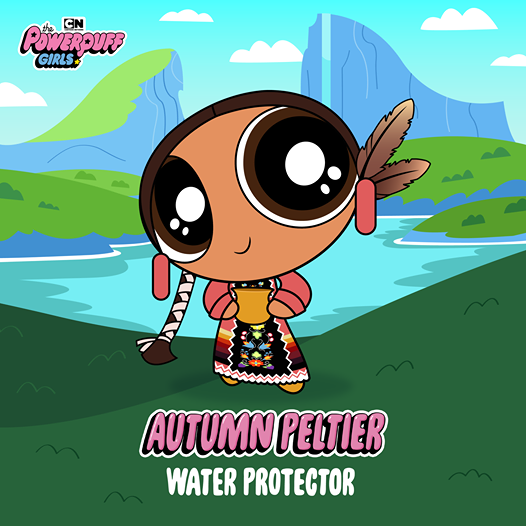 Wiikwemkoong Water Warrior Autumn Peltier was turned into a Powerpuff Girl on Indigenous Peoples’ Day in the United States. (Supplied)

The day has historically been celebrated as Columbus Day in the U.S., but a number of states have decided to observe Indigenous Peoples’ Day instead. They recognize the Indigenous populations that were displaced and decimated after Christopher Columbus and other European explorers reached the continent.

And this year, the American celebration had a very Canadian appeal, if you looked in the right place.

Many Canadians, especially here in Northern Ontario, are aware of Autumn Peltier, the young water warrior from Wiikwemkoong on Manitoulin Island. She was nominated for the International Children’s Peace Prize 2019 by the David Suzuki Foundation.

Peltier was the only nominee from Canada out of 137 nominees around the world. The 2019 International Children’s Peace Prize is awarded annually to a child who “fights courageously for children’s rights.”

Depending on your age, many Canadians are probably less familiar with The Powerpuff Girls cartoon, the Cartoon Network series featuring Blossom, Bubbles and Buttercup, three kindergarten-aged girls with superpowers. It aired in 1998 for five seasons.

It seems our very own water warrior has not escaped the show’s creator’s attention.

They even created an Autumn Peltier Powerpuff Girl character.

You may have already seen the post, as it has been shared 18,000 times in two days and has 575 comments.

If not, check it out here.

About the Author: Arron Pickard