REDress Project, May 5 events, important steps toward understanding and reconciliation says Member of Parliament for Algoma–Manitoulin–Kapuskasing, Carol Hughes
May 2, 2021 12:00 PM By: Carol Hughes 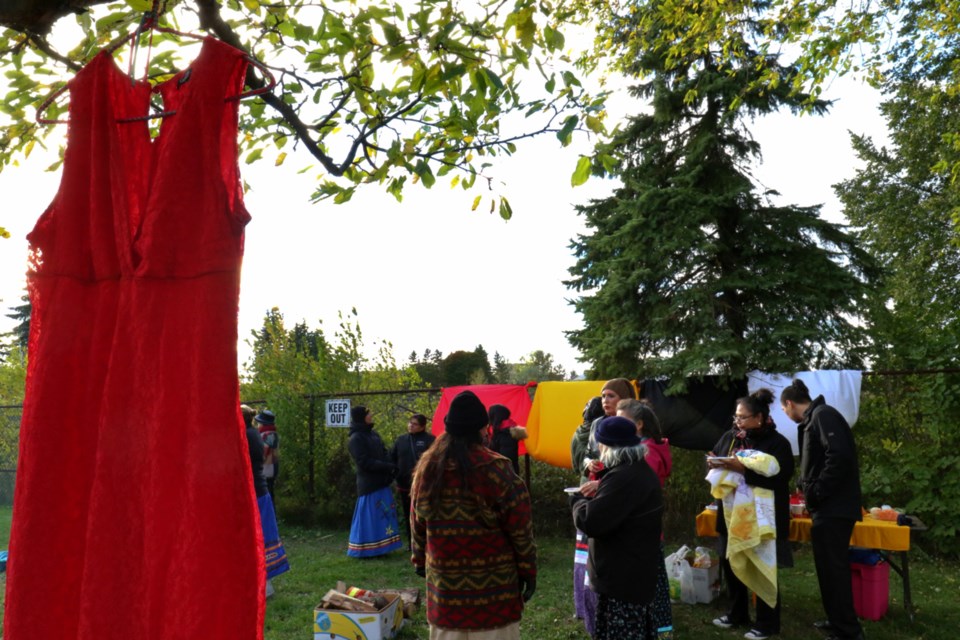 A red dress - symbolizing missing and murdered Indigenous women and girls - hangs from a tree during a 2018 Sisters In Spirit Vigil in Sault Ste. Marie. James Hopkin/SooToday

If you see a red dress hanging in a public space you are witnessing a true, grassroots movement, the REDress Project.

The brainchild of visual artist Jamie Black, the REDress Project is rooted in political action that the artist witnessed in Colombia in 2010. That’s when she saw a group of women wearing red dresses and demonstrating over missing family members who have been ‘disappeared’, a consistent feature of that country’s decades-long struggle with armed conflict.

Black recognized the parallel between those Colombian women and the families of Murdered and Missing Indigenous Women (MMIW) in Canada.

This was also at the same time as the Truth and Reconciliation Commission was starting to hold events across the country. The project dovetailed nicely with the spirit of the times and soon grew beyond Black’s installations taking on a life of its own in public spaces and on social media.

Since its inception, I have been more than impressed with the energy and determination attached to the REDress Project. This important and symbolic campaign uses a simple object to convey so many concepts along with strong emotions.

Now, it is also being used to amplify other voices that have been marginalized, specifically two-spirit, lesbian, gay, trans, bisexual, queer, questioning, intersex and asexual individuals who have faced similar discriminatory and violent behaviour.

The project is also transcending borders with red dresses being displayed in this manner in the United States too. The MMIW crisis is similar in that country with Indigenous women being murdered at a rate of ten times the national average.

Given America’s long history, it is incredible to consider that the current administration is the first to include a Native American, Deb Haaland who is serving as Secretary of the Interior. She recently announced the US will set up a special unit to investigate MMIW.

In Canada, we have undertaken a National Inquiry into Murdered and Missing Indigenous Women and Girls which only concluded with its report a few years back in 2019. The legacy of that work can be tied to the work of the Truth and Reconciliation Commission and may represent a real turn in the road for our country. The website for the National Inquiry is a treasure trove of information and includes a Gallery of Artistic Expression which showcases an incredible range of talent and multiple works rooted in loss and the MMIW phenomenon.

While viewing the gallery I was reminded of the work of Espanola resident Christie Belcourt. Already recognized as a talented artist, she is the creator and lead coordinator of Walking With Our Sisters, a 2012 art installation commemorating the MMIW of Canada and the United States. Like Black’s work, this project has toured North America with the help of local activists and continues to inspire action.

Part of the ingenuity of the REDress project is its simplicity and the use of the dress as a motif has certainly grown to the point that we mark Red Dress Day on May 5.

In 2018, it was central to the inception of the Lil’ Red Dress Campaign that sold red dress-shaped pins to raise money towards the costs of creating and installing missing person signage on Vancouver Island. The dresses also show up in beadwork, paintings, photographs, and other forms of artistic expression.

By hanging red dresses in public spaces, we can challenge society to come to terms with violence that should never be allowed to define us. In a sense, these dresses are revoking permission from abusers and reclaiming public spaces, one dress at a time.

This is an important step on our journey towards reconciliation, which can’t even begin without understanding.