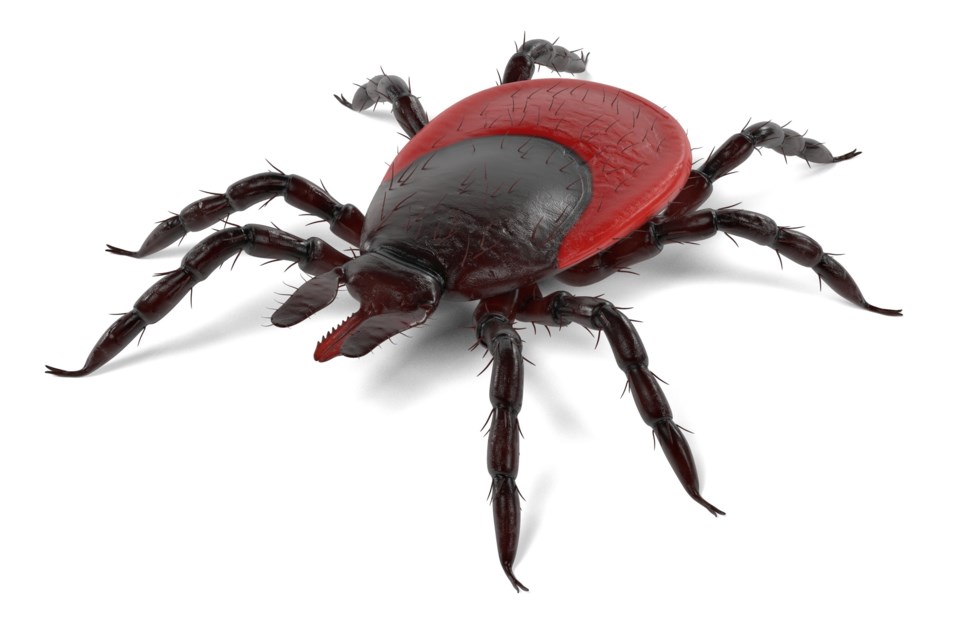 Blacklegged tick infected with Lyme Disease has been found in Elliot Lake area.

Two cases of black-legged ticks that can carry the Lyme disease bacteria have been reported to the Algoma District Health Unit. The reported incidents were discovered by two Elliot Lake residents who agreed to talk with ElliotLakeToday on the condition they remain anonymous.

The two residents reported the ticks, which were confirmed by Public Health to be black-legged ticks. The woman was told her test showed positive results for Lyme bacteria after several weeks of waiting for results due to a backlog in testing provincially. The man will not have results for several weeks.

According to the one resident, her husband discovered a tick on her after she was out gardening in her yard about two months ago.

“(It was when) raking leaves in my back yard which faces a wooded area in Elliot Lake, that a female black-legged tick, at some point, attached itself on the back of my upper arm. If my husband hadn't noticed the dark red bite spot, around 1 cm in diameter, I probably wouldn't have detected it for quite some time, or ever,” the woman said in an email to Elliot Lake Today.

“I felt no sensation that the tick had bitten and latched on. With much difficulty, I was able to remove the tick and placed it in a Ziploc bag. I went to the hospital Emergency Room after removal and was prescribed a 10-day dosage of antibiotics, which I followed diligently.”

The attending doctor asked the nurse to have the tick sent away to a lab to be analyzed. It is now eight weeks later since the tick bite and so far, I have no related symptoms of illness. My family doctor called last week to inform me that he had received the results of the tick analysis and it was found to be a carrier of the bacterium of Lyme disease. To err upon caution, a requisition was sent to our local blood clinic, for me to have two blood tests drawn, 10 days apart, to test for Lyme disease. The results are to first go to the Algoma Public Health Unit who will then send them to my doctor. Hopefully for me, both tests will return negative. My research, however, has shown that I should watch for related symptoms, for years to come.”

Similar positive cases have been found by Sudbury Public Health.

“Elliot Lakers who are avid gardeners or campers and hikers in our woods, can be alerted of this outcome and follow the proper safety guidelines for the prevention of tick bites,” the woman said in her email.

In the incident involving a male resident of Elliot Lake he suspects he may have picked up the tick after picking up a boat from a cottage property on Lake Lauzon.

The man discovered the tick after detecting a burning sensation on his thigh after the boat was picked up from a driveway that had tall grasses growing on it at the cottage.

He removed the tick and took it to the Algoma Public Health Unit where it was confirmed it was a black-legged tick known to carry Lyme disease bacteria. Test results will also take several weeks to determine whether the tick tests positive. He is also undergoing antibiotic treatment as suggested by his doctor.

Public Health Sudbury and Districts is reminding everyone of the importance of taking precautions to protect themselves and those in their care. It is similar recommendations issued by health units in Ontario.

If you find a tick attached to a human:

Other symptoms of the disease can include fever, headache, and muscle and joint pain. If left untreated, Lyme disease can cause serious problems to the heart, joints, and nervous system. Lyme disease is treated with antibiotics.

Good morning, Elliot Lake!
Aug 3, 2020 6:00 AM
Comments
We welcome your feedback and encourage you to share your thoughts. We ask that you be respectful of others and their points of view, refrain from personal attacks and stay on topic. To learn about our commenting policies and how we moderate, please read our Community Guidelines.