BEYOND LOCAL: Is it possible our fear of giant hornets is oversized?

Biologists say there is a lot we still don't know about the so-called murder hornets
Jun 4, 2020 8:55 PM By: The Conversation 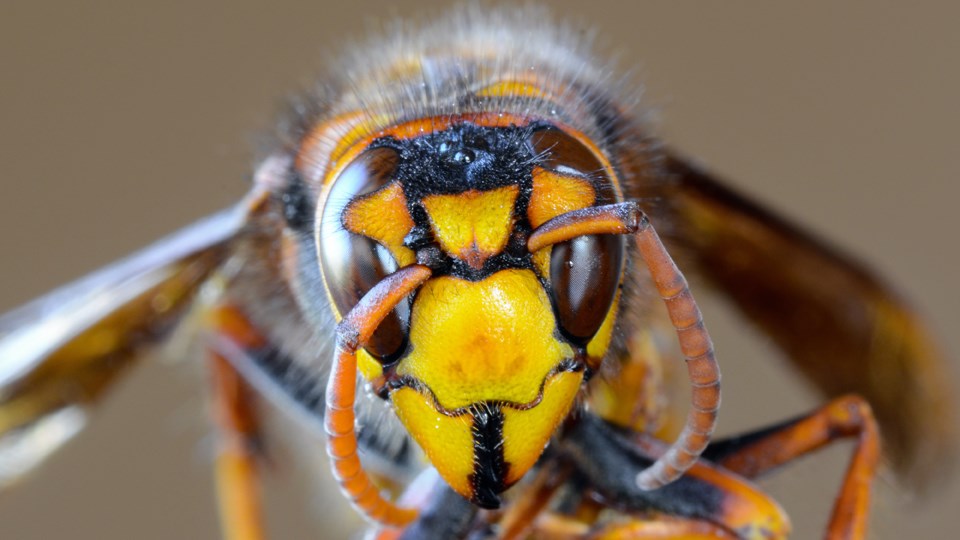 Closeup of the handsome face of an Asian giant hornet. (Image: Adobe Stock)

Asian giant hornets have received plenty of media attention in recent days, due to the fear that a potentially dangerous invasive species has arrived in North America. In 2019, sightings of the giant hornet — Vespa mandarinia — were reported near White Rock, B.C., and Blaine, Wash.; and a nest was destroyed near Nanaimo, B.C..

Although they’ve been harshly labelled “murder hornets” in popular coverage, giant hornets are not particularly aggressive toward humans. There have been several articles now dispelling some of the myths about these impressive creatures. The most important point is that the only tangible threat these hornets pose is to honey bees. The reason that’s concerning has nothing to do with the hornets, and everything to do with us.

The giant hornet is native to Asia, where it evolved as a specialist predator of other social insects, including the local eastern honey bee, Apis cerana. You may know this bee from videos of its workers fending off giant hornets by mobbing them and cooking them to death with heat generated by their flight muscles.

Invasiveness is in the eye of the beholder

Even if giant hornets were to gain a foothold in North America — and that’s big if, because numerous entomologists and bug-watchers are on the case — it’s only by ticking one of a few boxes that they might be considered invasive at all. Typically, introduced species are considered invasive if they cause harm to the environment, the economy or to human well-being. Many invasive species, such as zebra mussels and knotweed, do all three.

The giant hornet might cause significant economic harm by attacking managed honey bees, or it might not — we simply don’t know. What we do know is that giant hornets do not travel far to start new nests, making them unlikely to spread quickly. Their spread would likely also be limited by Rocky Mountains and the harsh winters of the prairies.

Regardless of their impact on cultivated honey bees — which can be mitigated using metal screens or grates — the giant hornet may be unlikely to do much harm to native biodiversity.

In fact, one does not need to look far for an introduced species that causes minimal harm. The European hornet (Vespa crabro) was first introduced to North America in the mid-1800s, and has established itself throughout much of eastern North America ever since.

The Asian giant hornet, aside from its diet of honey bees, is similar to its European cousin, nesting in abandoned burrows and hunting other large insects like beetles and moths in the early summer. Both species also damage the twigs and branches of oaks and other trees, chewing a ring around them to extract sap. Hornets are not known to hunt bees other than honey bees, maybe because no other bee species has such large colonies.

In other words, the impact of giant hornets on North American ecosystems might be minimal. Both the risk of their introduction and the harm they may cause are direct results of our heavy dependence on a single, introduced and domesticated species, one that is already prone to disease and sudden colony collapse — the honey bee.

If introduced, the giant hornet would just be the latest in a series of honey bee-associated pests to make their way to North America. These include the bee louse, tracheal mites, wax moths, the small hive beetle and, of course, the much maligned Varroa mite, which is native to the same part of the world as the giant hornet.

Like the giant hornet, the Varroa mite expanded from Apis cerana onto Apis mellifera after the latter was introduced to Asia. It is difficult to compare the impacts of these other pests to losses from giant hornets. For instance, a classic study detailing the hornet’s predation on honey bees states only that the giant hornet is responsible for the loss of thousands of colonies in Japan each year.

What’s clear, however, is that despite the presence of all of the above pests Japan, beekeepers there continue to successfully manage European honey bee hives — so much so that management of the more resilient eastern honey bee is declining.

Ironically, the European honey bee also attacks neighbouring colonies of the eastern honey bee. Perhaps we should take to calling them murder bees.

On top of everything else, there are good reasons not to panic about giant hornets. A number of other invasive insects are of much more immediate concern, such as the spotted lanternfly and brown marmorated stink bug.

As well, overstating the risk posed by giant hornets could put native wasps in danger, especially large, strikingly coloured species like the cicada killer and great golden digger wasp, which seldom sting humans. Both are solitary, ground-nesting species that hunt other insects to provide food for the young. Other large, wasp-like creatures include the non-stinging pigeon horntail, a wood-boring insect, and the elm sawfly, a leaf-eater that looks a bit like a cross between a wasp and a bumble bee.

These species and others like them may already be at risk due to habitat loss and insecticides.

We’d all be much better off if we invested our fear of giant hornets into learning about native insects, and supporting diverse and resilient agricultural systems instead.

Ontario confirms 111 new cases of COVID-19 today
Jul 14, 2020 11:30 AM
Comments
We welcome your feedback and encourage you to share your thoughts. We ask that you be respectful of others and their points of view, refrain from personal attacks and stay on topic. To learn about our commenting policies and how we moderate, please read our Community Guidelines.