WASHINGTON — President Donald Trump declared that a widespread U.S. outbreak of the new respiratory virus sweeping the globe isn't inevitable even as top health authorities at his side warned Americans that more infections are coming.
0
Feb 27, 2020 12:09 PM By: Canadian Press 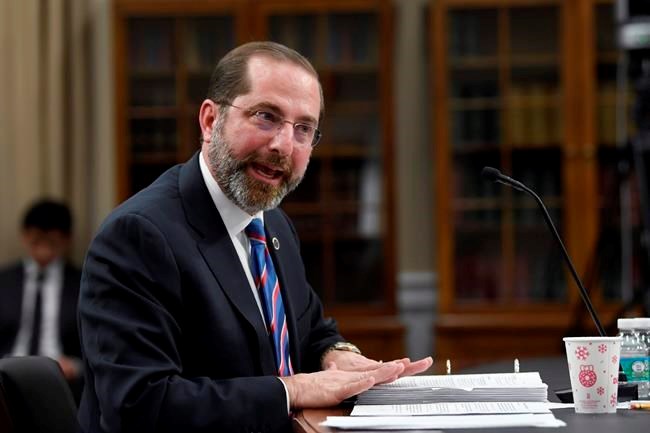 WASHINGTON — President Donald Trump declared that a widespread U.S. outbreak of the new respiratory virus sweeping the globe isn't inevitable even as top health authorities at his side warned Americans that more infections are coming.

Shortly after Trump spoke Wednesday, the government announced a worrisome development: Another person in the U.S. is infected — someone in California who doesn't appear to have the usual risk factors of having abroad or being exposed to another patient.

At a White House news conference, Trump sought to minimize fears as he insisted the U.S. is “very, very ready” for whatever the COVID-19 outbreak brings. Under fire about the government's response, he put Mike Pence to lead the administration's response. Pence on Thursday named the State Department's global health doctor to the coronavirus response.

“This will end,” Trump said of the outbreak. “You don't want to see panic because there's no reason to be panicked.”

But standing next to him, the very health officials Trump praised for fighting the new coronavirus stressed that schools, businesses and individuals need to get ready.

“We do expect more cases,” said Dr. Anne Schuchat of the Centers for Disease Control and Prevention.

If the CDC confirms that the latest U.S. case doesn't involve travel or contact with an infected person, it would be a first in this country and a sign that efforts to contain the virus' spread haven't been enough.

“It's possible this could be an instance of community spread of COVID-19," the CDC said in a statement.

More than 81,000 cases of COVID-19, an illness characterized by fever and coughing and in serious cases shortness of breath or pneumonia, have occurred since the new virus emerged in China.

The newest case from California brings the total number infected in the U.S. to 60, most of them evacuated from outbreak zones.

Trump credited border restrictions that have blocked people coming into the U.S. from China for keeping infections low. But now countries around the world — from South Korea and Japan to Italy and Iran — are experiencing growing numbers of cases. Asked if it was time to either lift the China restrictions or take steps for from elsewhere, he said: “At a right time we may do that. Right now it's not the time.”

Trump spent close to an hour discussing the virus threat, after a week of sharp stock market losses over the health crisis and concern within the administration that a growing outbreak could affect his reelection. He blamed the Democrats for the stock market slide, saying, "I think the financial markets are very upset when they look at the Democrat candidates standing on that stage making fools out of themselves." And he shifted to defend his overall record and predict a win in November.

A key question is whether the Trump administration is spending enough money to get the country prepared — especially as the CDC has struggled to expand the number of states that can test people for the virus. Other key concerns are stockpiling masks and other protective equipment for health workers, and developing a vaccine or treatment.

Health officials have exhausted an initial $105 million in emergency funding and have been looking elsewhere for dollars. Earlier this week, Trump requested $2.5 billion from Congress to fight the virus. Senate Democratic Leader Chuck Schumer of New York countered with a proposal for $8.5 billion.

Trump told reporters he was open to spending “whatever's appropriate.”

Trump compared the new virus repeatedly to the flu, which kills tens of thousands of people each year. The new coronavirus has killed more than 2,700 people — most in China and none in the U.S. — but scientists still don't understand who's most at risk or what the death rate is.

Without a vaccine, the CDC's Schuchat advised people to follow “tried and true, not very exciting" but important precautions: Wash your hands, cover your coughs and stay home when you're sick.

A day earlier, another CDC official, Dr. Nancy Messonnier, was even more blunt, telling Americans to get ready for some of the same steps as occurred during the 2009 flu pandemic, such as school closings. “It's not so much a question of if this will happen anymore, but rather more a question of exactly when this will happen — and how many people in this country will have severe illness," she said.

The National Institutes of Health's top infectious disease chief cautioned a vaccine won't be ready for widespread use for a year or more. But Dr. Anthony Fauci said even if the virus wanes soon, it's “quite conceivable” that it might “come back and recycle next year.” By then, he said, “we hope to have a vaccine.”

Democrats were quick to condemn Trump's response to the outbreak. House Speaker Nancy Pelosi called it “opaque and chaotic.”

“Instead of listening to public health and medical experts, the president has been downplaying the potential impact of the virus for over a month,” said Democratic Rep. Bennie Thompson of Mississippi, chairman of the House Homeland Security Committee.

Thompson added that putting Pence, “someone with no public health expertise, in charge of the response will not confidence with the American people and raises questions about the administration's ability to an effective response to a complex public health threat.”

Pence announced the appointment Thursday of Debbie Birx, the administration's global AIDS , as the White House coronavirus response . Birx joins an existing coronavirus task force led by Health and Human Services Secretary Alex Azar and will report to Pence. She was nominated to her State Department post by President Barack Obama.

During his tenure as Indiana's governor, Pence faced criticism for his response to a public health crisis in the southern part of the state.

In 2015, Scott County saw the number of people infected with HIV skyrocket, with nearly 200 people testing positive for the virus in a span of months. Indiana law at the time prohibited needle exchanges, exacerbating the outbreak, which primarily infected intravenous users of the painkiller Opana.

Pence had long opposed needle exchanges but was eventually persuaded to issue an executive order allowing one in Scott County. Despite his own misgivings — Pence said he didn’t support the exchanges as an “anti-drug policy” — he signed a law allowing the state government to approve them on a case-by-case basis.

Contagious singing as Corona Community Chorus unites voices
Apr 4, 2020 10:17 AM
Comments
We welcome your feedback and encourage you to share your thoughts on this story. We ask that you be respectful of others and their points of view, refrain from personal attacks and stay on topic. To learn about our commenting policies and how we moderate, please read our Community Guidelines.