For this week’s mid-week mugging, ElliotLakeToday brings you Tex in the Trees
Dec 21, 2017 10:49 AM By: Melanie Farenzena 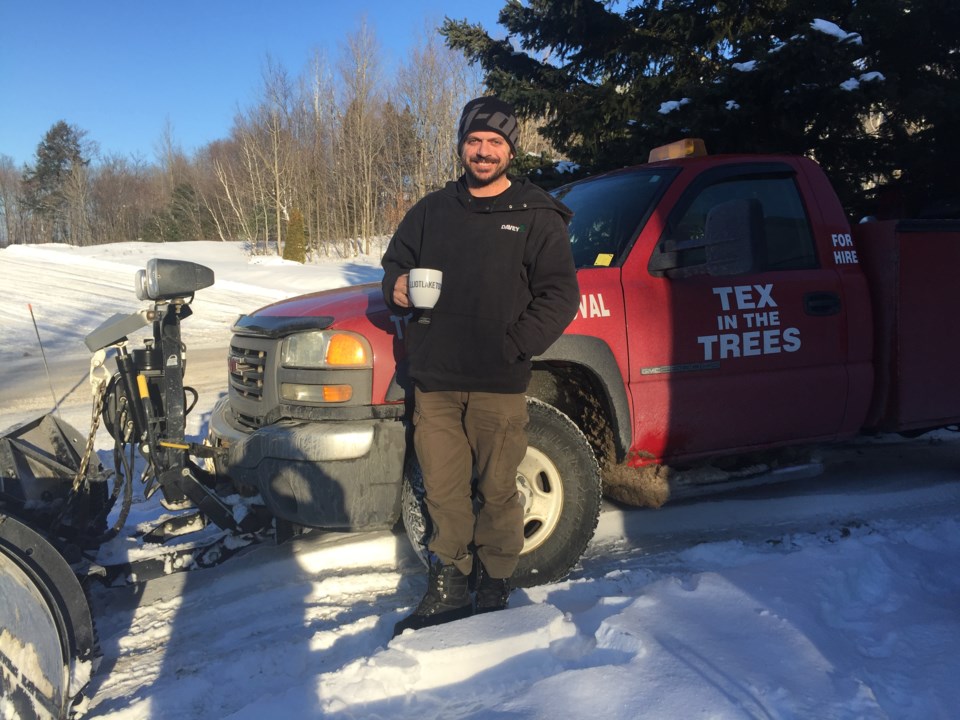 Tex Chapman, owner/operator of Tex in the Trees, is the subject of this week’s mid-week mugging. Melanie Farenzena/ ElliotLakeToday

Some fall into their careers. Tex Chapman jumped.

In 2009, a friend snapped a photo of Chapman on top of a 20-foot rock cliff at the edge of Methuen Lake.

The next day, his phone rang from a number unfamiliar to Chapman.

Being a rookie groundsman, Chapman was informed it would take him five years to get to the goal of becoming a foreman. Two years later, he took a transfer to Muskoka, where he spent two and a half years working with bigger trees.

During Easter of 2014, while visiting family and friends, he noticed there was a high demand in the Elliot Lake area for workers with his skills. He came across a resident who had hired a tree company to take care of trees and when Chapman asked the gentleman why he didn't take care of some trees that were dangerous, the gentleman informed him the company moved to Toronto and it would take six months for the job to be done.

The rest is history. Chapman started Tex in the Trees, which is the subject of this week's Mid-Week Mugging.

Chapman works with residents who need help with removing snow from their driveways after a heavy snowfall or if they need lawn or tree care.

The services he provides for his clients are:

The reason behind the business? Chapman said he decided to start the business five years ago mainly because of the fact he loves to climb trees.

Nothing stops Chapman when it comes to serving his clients and leaving them happy. According to him, it doesn’t matter on the size of the job, he’ll do it.

Northern shooters have a passion for nature, wildlife and the northern lights
Nov 22, 2017 11:00 AM

A year in, Ted's a busy guy
Nov 8, 2017 10:00 AM
Comments
We welcome your feedback and encourage you to share your thoughts. We ask that you be respectful of others and their points of view, refrain from personal attacks and stay on topic. To learn about our commenting policies and how we moderate, please read our Community Guidelines.