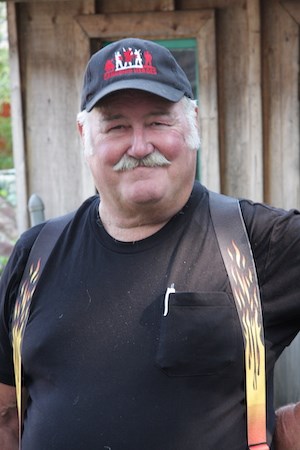 Passed peacefully away on May 2, 2019 at the Blind River Hospital after a brief but courageous fight with cancer at the age of 76. Survived by his wife Mary Ann of 56 years, and his children Tom (Brenda), Tammy, Bonnie and Michael (Anna).  Grandfather to Nathan, Justin, Malcolm, Alice and Caroline. Brother of Joyce Bartley (the late Gerry) of Norland. Will be missed by his best buddies Brian and Darrell as well as numerous other cherished friends.

He was always willing to help others. He cared for the seniors in his community by helping them any way he could.

John loved the outdoors, hunting, fishing, gardening and enjoying a cold beer on the deck. He was continually collecting wood to fuel his need to build “something”, he was constantly dreaming up new projects.

He was employed by the MNR for 32 years in forestry operations. The day after he retired, he went to his workshop at 6am to hammer away at one of his new projects. Shortly after, he was promptly informed by his wife that if this was going to be his retirement life, he should look for another job. Consequently, John spent the next 15 years working as a forestry consultant.

The Stewart Family wishes to thank everyone for the support and love shown to them during this difficult time, especially Brian, Darrell and Sandra who were there every step of the way.

Family and friends are invited to celebrate John’s life on Saturday, May 11, 2019 from 1pm to 5pm at the Royal Canadian Legion Hall, in Blind River. Reverend Lyn Heely officiating.

Members of the Masonic Order are requested to assemble at the Royal Canadian Legion Hall, #189 on Saturday, May 11, 2019 at 1:00 pm for their Late Brother John Stewart.