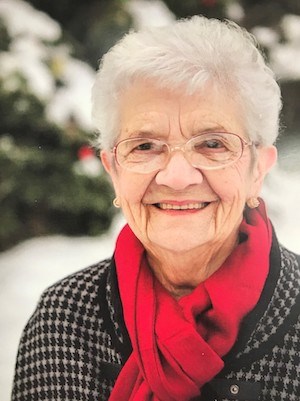 We regretfully announce, with broken hearts, the passing of Laurise Marchand in her 89th year.

Laurise will always be remembered for her infectious laugh, her strong faith and her devotion to sports, specifically the Montréal Canadiens, the Toronto Blue Jays and watching her grandchildren’s sporting events. Laurise’s biggest joy was spending time with her family, friends and seeing everyone gather together. Laurise was a beautiful soul who loved and was loved by many.

Laurise’s family would like to thank the kind and caring staff at both the Thessalon Hospital and the Sault Area Hospital for their diligent and compassionate care. In lieu of flowers, memorial donations can be made to St. Ambrose Catholic Church or to Janet’s Warriors Transportation 4 Treatment. A celebration of life will be held at a later date to honour and remember our extraordinary Laurise. Arrangements entrusted to Beggs Funeral Home