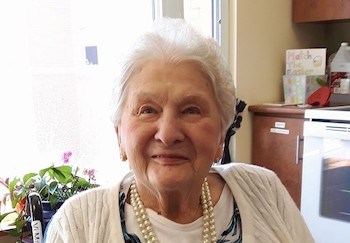 (April 8, 1926 – March 14, 2019) - Passed away peacefully at the Algoma Manor on March 14, 2019 at age 93. Lovingly remembered by her 5 sons, her daughter and their spouses. She will be missed by numerous grandchildren, great grandchildren, nieces and nephews. She is survived by her brother Stanley Yozkowski (the late Rita). Predeceased by her parents Walter and Bernice (nee Bernard) Yozkowski and her sister Bernice Davidson (Earl).

Vi was a very out going and giving person. She gave freely of her time and energy. She was a lifetime associate member of the Royal Canadian Legion, Branch 553 in Chelmsford. She served as president, was a member of the lady’s auxiliary and enjoyed the Colour Party. She spent many a day playing darts with the numerous friends she developed over the years. She was an avid volunteer for both the federal and provincial elections. She will be sorely missed by many and all.

The family wishes to thank the staff of the Algoma Manor in Thessalon for the phenomenal care given to our mother.

Interment in the family plot at Parklawn Cemetery in Sudbury, Ontario will be held at a later date.