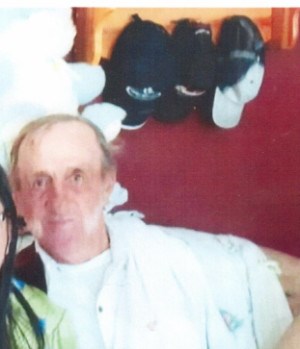 Passed away peacefully with his family by his side at Thessalon Hospital on Wednesday August 29,  2018.   James Geroux in his 67th year, beloved husband and soul mate of Betty for 25 years. Loving father of Jennifer ( late Dan) of Sault Ste Marie, Danielle (Dave) of Cambridge and Edward (Shawn) of Sault Ste Marie. Special Grandfather to Matthew, Angel and James. Dear son of the late Lawrence and Myrla Geroux.  Dear brother of Wilfred (Sue) of Sault Ste Marie, the late Jack, Nelson of British Columbia, George of Niagara Falls , Mervin of Sudbury, Frank of Niagara Falls, the late Lena Francoeur and Mel (Kat) of Sault Ste Marie.  Also survived by numerous nieces and nephews. Born in Thessalon, Ontario on Tuesday October 16, 1951, Jim  was the son of Lawrence and Myrla Geroux. James worked in the mines, and did some logging.   A celebration of James’ life will be held at a later date at his residence. Heartfelt thanks to Nick of the Thessalon Hospital for his care and compassion. Thanks to Dr Workman for the care that James Received. Donations to the Canadian Cancer Society or Thessalon Food Bank greatly appreciated. Funeral arrangements entrusted to Beggs Funeral Home, Thessalon, Ontario