Youngster Jonathon Jennings back as the starter with the B.C. Lions

The B.C. Lions are back to being Jonathon Jennings' team. The third-year pro returns under centre Saturday night when the Lions (6-5) visit the league-leading Calgary Stampeders (9-1-1).
0
Sep 13, 2017 5:02 PM By: Canadian Press 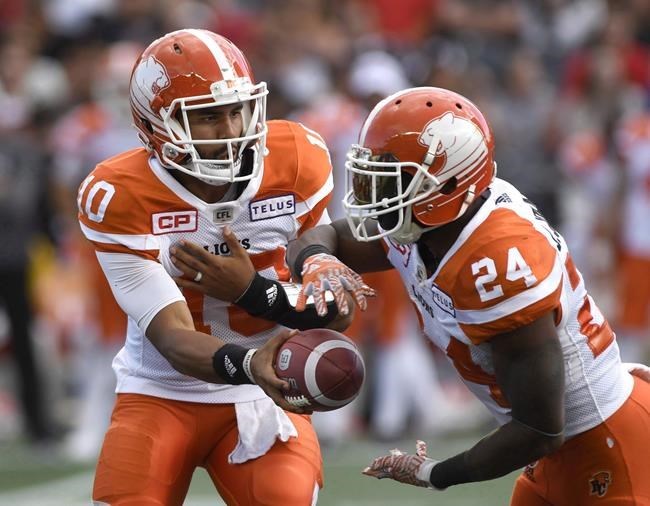 The B.C. Lions are back to being Jonathon Jennings' team.

Lulay was hurt on the Lions' second play from scrimmage and Jennings came off the bench to complete 22 of 29 passes for 295 yards and two TDs. Jennings didn't throw an interception and effectively used his mobility to either escape the rush or extend plays downfield.

Jennings had lost the starting job after throwing seven interceptions and just two touchdown passes over three games since returning from a shoulder injury in mid-July.

Lulay replaced Jennings in the third quarter of the Lions' 31-24 loss to Ottawa on Aug. 26. B.C. trailed 31-3 at the time but rallied to make it a seven-point game before Lulay's late interception preserved the Redblacks' victory.

Jennings opened the season as the starter but he was hurt in the Lions' 41-26 win over Hamilton on July 15. Lulay came off the bench to throw for 436 yards and three TDs in that contest.

The Lions won three of four games — including the one against Hamilton — with Lulay under centre.

Jennings faces a stiff test this week. Calgary has won seven straight games and is a league-best 5-0 this season at McMahon Stadium.

The Stampeders are also unbeaten (5-0) within the West Division, having downed the Lions 21-17 in Vancouver on Aug. 18. Jennings finished 26 of 38 passing for 240 yards in that game with a touchdown and two interceptions.

What's more, Calgary's defence has allowed a league-low 209 points and is second overall with 29 sacks. But Stampeders' starter Bo Levi Mitchell, the CFL's defending MVP, was an uncharacteristic 15 of 31 passing last month against B.C. for 237 yards with no touchdowns and an interception.

The usually disciplined Stampeders were also penalized 15 times for 150 yards.

It's hard to see both Mitchell struggling and undisciplined play happening again. And then there's the matter of the Stampeders being at home and sporting a 14-game win streak against West Division rivals, one victory short of the CFL record for longest divisional streak.

The Riders (5-5) could be without starter Kevin Glenn, who suffered a hand injury in Saturday's 48-28 loss to Winnipeg. If Glenn can't play, Canadian Brandon Bridge is expected to make the start. Bridge, from Mississauga, Ont., completed four of eight passes for 67 yards and an interception versus the Bombers. Hamilton (2-8) has won two straight under head coach June Jones and with Jeremiah Masoli under centre. The Ticats haven't won three straight in over two years.

Edmonton (7-4) has dropped four straight, including a 25-22 decision to Calgary on Saturday. Quarterback Mike Reilly threw for 461 yards and a TD and Derel Walker had eight catches for 93 yards and added a rushing TD in his first game back. Toronto (4-7-1) comes off the bye just one point behind front-running Ottawa (4-7-1) in the East Division. But the Argos are a dismal 0-5 versus West Division rivals this season.

Veteran Drew Tate starts for Ottawa (4-7-1) with incumbent Trevor Harris (shoulder) on the six-game injured list. He threw for 114 yards and a TD in last week's 26-22 loss to Hamilton. GM Kavis Reed will be on the sidelines for Montreal (3-8-0) after firing head coach Jacques Chapdelaine and defensive co-ordinator Noel Thorpe. The Als became the first CFL team to fire their head coach three straight years.

Canadian Premier League looking to resume play in Prince Edward Island
May 28, 2020 4:42 PM
Harness drivers back to work with qualifying races at Woodbine Mohawk Park
May 28, 2020 4:32 PM
Tam: NHL proposal being 'reviewed,' mandatory quarantine remains in place
May 28, 2020 4:29 PM
Comments
We welcome your feedback and encourage you to share your thoughts. We ask that you be respectful of others and their points of view, refrain from personal attacks and stay on topic. To learn about our commenting policies and how we moderate, please read our Community Guidelines.