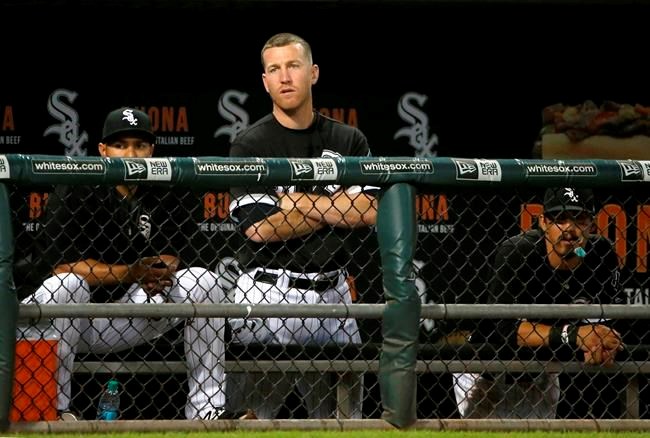 "It should tell them, 'Hey, we're in this,' and we need to continue to play and play hard and play better than we've done," Yankees manager Joe Girardi said after a 6-3 victory in Minnesota. "But it should be a pick-me-up in there in a sense, like, 'Hey, there's a lot of people who believe in this club.'"

As the July 31 nonwaiver trade deadline nears, the last-place White Sox made their second big trade in a week. Last Thursday, they sent ace Jose Quintana to the crosstown Cubs for four minor leaguers.

Along with Clippard, the White Sox got left-handed pitcher Ian Clarkin and outfielders Blake Rutherford and Tito Polo. They also announced top prospect Yoan Moncada would be called up for Wednesday's game against the Dodgers.

"Over the last few weeks we spent a considerable amount of time surveying the market for each of these players individually and decided the more prudent path to acquiring more talent similar to what we have over the last several months, the best path to acquiring the most potential impact talent, was to bundle these players together," White Sox general manager Rick Hahn said.

Frazier was a two-time All-Star with Cincinnati, but he's in a down year. He could play first base, a position the Yankees have struggled to stabilize all season, or remain at third base and move Chase Headley from one corner to the other.

The 31-year-old Frazier, who grew up in New Jersey as a Yankees fan, was pulled from the starting lineup shortly before the White Sox hosted the Los Angeles Dodgers on Tuesday night. He spent the early part of the game in the dugout talking with Robertson.

Frazier is hitting .207 with 16 home runs and 44 RBIs. Last year, he set career highs with 40 homers and 98 RBIs. He is eligible for free agency after this season.

"It has been fun in Chicago, but I'm also excited to see what's in store for me in New York," Frazier said. "It's pretty cool. It is kind of surreal right now because it all happened at once. You hear the . It could have been a different team here and there. It's the Yankees, so I'm pretty excited."

With the Yankees playing the Twins on Wednesday afternoon, it was uncertain whether the new arrivals would make it in time for the game. What's certain, though, is that Clippard won't be wearing pinstripes anymore.

Drafted by the Yankees in 2003 and reacquired in a deadline trade last summer with Arizona, Clippard was 1-5 with a 4.95 ERA in 40 games. The 32-year-old right-hander hit a rough patch in mid-June that lasted into the All-Star break.

This is the fourth time he's been traded in less than three seasons.

"From a lifestyle standpoint, it's getting kind of frustrating," Clippard said. "And from a team standpoint, I love these guys. I love this organization. We're playing well, and we're in the thick of things. To leave is gut-wrenching for me. But it is what it is, and there's nothing as players that we can do about it."

He'll be replaced by the righty Robertson, who's eagerly returning to his original team. The 32-year-old is 4-2 with a 2.70 ERA, successful on 13 of 14 save chances. He broke with the Yankees in 2008 and had 39 saves in 2014, before becoming a free agent and signing a four-year contract with the White Sox.

Though All-Star setup man Dellin Betances has struggled lately, adding Robertson and Kahnle to the mix with right-hander Adam Warren as bridges to ace closer Aroldis Chapman ought to be a big boost down the stretch for a team with a thin rotation.

"You're talking about a lot of hard throwers. Guys with strikeouts. A guy needs a day off, really, anyone can move into a spot," Girardi said.

The 20-year-old Rutherford was hitting .281 with 30 RBIs and 25 stolen bases at Class A Charleston to make the South Atlantic League All-Star team. He was a first-round draft pick last year.

Moncada, a 22-year-old infielder, was acquired from the Red Sox for ace Chris Sale in the and is hitting .282 with 12 homers, 36 RBIs and 17 stolen bases at Triple-A Charlotte. Boston spent $63 million — including a record $31.5 million bonus — to sign Moncada in 2015 after he left Cuba. He was recently named the top prospect in the game by Baseball America.

Larry Walker Sr. proud his son voted into National Baseball Hall of Fame
Jan 22, 2020 4:00 AM
Canadian Milos Raonic advances to third round at Australian Open
Jan 22, 2020 1:45 AM
Tuesday's Games
Jan 22, 2020 12:42 AM
Comments
We welcome your feedback and encourage you to share your thoughts on this story. We ask that you be respectful of others and their points of view, refrain from personal attacks and stay on topic. To learn about our commenting policies and how we moderate, please read our Community Guidelines.