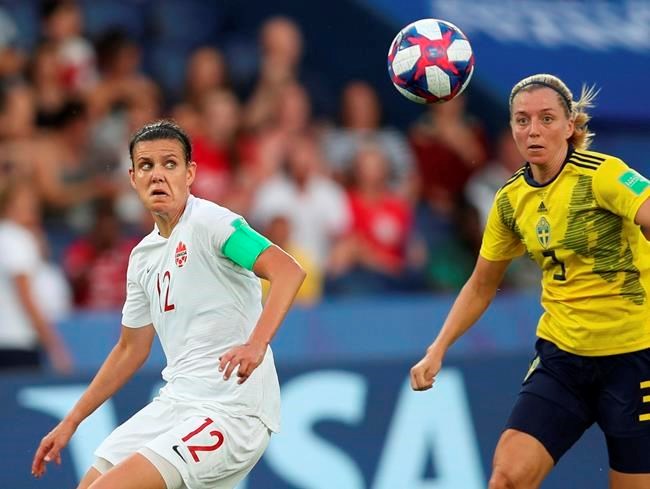 PARIS — Christine Sinclair has put Canadian soccer on her shoulders for close to 20 years.

So when Janine Beckie and not the talismanic captain walked to the penalty spot Monday in Canada's Women's World Cup loss to Sweden with a chance to tie the round-of-16 game at 1-1, many wondered why.

And in a country where hockey is king, memories of the 1998 Nagano Olympics resurfaced for some. Back then a nation wondered why Wayne Gretzky was nailed to the bench as Canada lost a semifinal shootout to Dominik Hasek and the Czech Republic.

The similarities are that Canada lost both games and Sinclair and Gretzky are Canadian treasures. But that's it.

Team Canada coach Marc Crawford elected to go with five other shooters while No. 99 crossed his fingers and hoped a sixth would be needed.

Sinclair chose her own fate. As is her right. Strikers need to feel in the mood when it comes to spot kicks.

Having had her spot kick saved by the same 'keeper — Hedvig Lindahl — in Canada's penalty shootout win in the Algarve Cup third-place match in March, Sinclair conferred with Beckie during the video review prior to the 69th-minute penalty at Parc des Prince.

"We have a group of players on the team that practise PKs after every practice pretty much and there's a group of us that are comfortable doing it," Sinclair explained afterwards. "Hedvig saved mine in the Algarve just a couple of months ago so I went up to Janine and asked her 'If you want it, it's yours.' And she said, 'Absolutely.'"

"I feel bad for even asking her," she added. "But I have all the faith in the world in her. We all do. She's fearless out there."

Beckie hit a fine penalty, towards the lower corner. Lindahl made a better save.

"I asked her after the game if she'd placed it where she wanted to and she said yes. And I'm like 'Then you can't do anything more,'" said Sinclair. "The keeper made a world-class save and you have to tip your hat to her."

Beckie confirmed Sinclair had asked her if she wanted to take it because of what happened at the Algarve Cup.

Beckie does not change her penalty routine, something the Swedes clearly remembered.

"I'm not one that changes where I go. I'm confident in my penalty. I thought about it on the spot but yeah she made a fantastic save."

"It's the feel of the game and who's going to step up and Janine did that," he said. "That's a tough thing to do. So good for her, she did it. I'm proud of her for sure.

"It was actually a pretty decent kick. But an excellent save from Hedvig."

The 24-year-old Beckie, who has 25 goals in 60 games for Canada, was disconsolate after the game.

"I feel like I let the team down, that's really what I'm feeling right now. Frustrated, disappointed and all the negative emotions."

The missed penalty was not the reason Canada lost, although it would have likely been a different game if it had gone in.

A giveaway, sadly by Beckie, set the stage for the 55th-minute goal by Stina Blackstenius, with a major assist to Kosovare Aslanni for driving down the field and delivering a marvellous curling cross that carved opened the Canadian defence.

And Canada showed few teeth in front of goal. Sweden took its chance and then battened down the hatches for the 1-0 win.

Sinclair, who has 182 goals under her belt, showed her penalty kick mettle four years ago when she slammed home a 92nd-minute penalty for a 1-0 win over China in the 2015 World Cup opener.

Sinclair is famous for her composure in front of the goal.

"It's always her. It's always her that gets the goal that we need to win the cup or win the game," Rhian Wilkinson, a former teammate who served as a Canadian assistant coach at the World Cup, said before the tournament.

And there lies the rub.

No one can fault Sinclair for not feeling the vibe for taking a spot kick. After 286 internationals, here's guessing she knows what she's doing.

As selfless as they come, she put the team before herself by reasoning in this instance, the ball was perhaps better off in someone else's hands.

Canadians aren't used to that when it comes to women's soccer.

At 36, the remarkable Sinclair is in the twilight of her career. Some time sooner than later, she will walk away for good.

Monday proved how difficult that will be.

Kane grateful for other pioneers ahead of her own Sports Hall of Fame induction
May 30, 2020 3:43 PM

Toronto FC's Jozy Altidore ready to game for a good cause in 'Call of Duty' event
May 30, 2020 2:20 PM
Coronavirus safety plan approved for 2 F1 races in Austria
May 30, 2020 1:56 PM
Comments
We welcome your feedback and encourage you to share your thoughts. We ask that you be respectful of others and their points of view, refrain from personal attacks and stay on topic. To learn about our commenting policies and how we moderate, please read our Community Guidelines.