The Canadian coach of the South Korean women's hockey team says she has "mixed feelings" about including players from North Korea on her roster.
Jan 17, 2018 12:52 PM By: Canadian Press 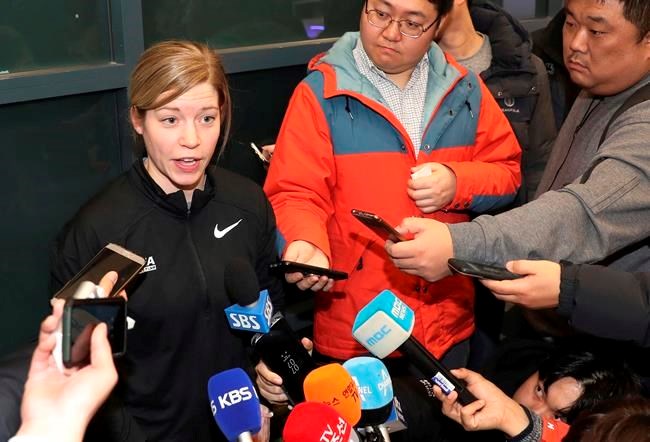 The Canadian coach of the South Korean women's hockey team says she has "mixed feelings" about including players from North Korea on her roster.

Sarah Murray, a dual Canadian-American citizen and the daughter of former NHL coach Andy Murray, is concerned about the timing of the decision to ice a unified team.

A deal to combine North and South Korean women's hockey players on one team was reached Wednesday, pending approval from International Olympic Committee.

During their third day of talks in about a week, senior officials also reached an agreement that would see athletes marching together under a "unification flag" depicting their peninsula during the opening ceremony, Seoul's Unification Ministry said.

While Murray acknowledged having the two countries come together at the Olympics is "great for the politics and world relations," she said she would have preferred "this had been done three to four years ago, when we started this journey."

"I have mixed feelings about this combination," she said in an email to The Canadian Press.

Murray was hired to lead the South Korean program in 2014.

If a joint hockey squad is realized, it would be the Koreas' first unified team in an Olympics.

"We heard unofficial rumours about the possibility four to five days ago, but we didn't believe it because it was so close to the start of the Olympics," she said. "However, in the last couple of days, things have gotten much more serious."

The IOC is due to meet with officials from the two Koreas, along with Pyeongchang organizing committee members, on Saturday at its headquarters in Switzerland.

According to Yonhap news agency, Murray told reporters on Tuesday that adding players so close to the Games "is a little bit dangerous just for team chemistry because the girls have been together for so long.''

The potential move has garnered the support of South Korea president Moon Jae-in, who said during a meeting with his country's athletes on Wednesday that a joint hockey team would be a historic event that moves the hearts of people around the world.

South Korea's Unification Ministry spokesman Baik Tae-hyun told a regular briefing Wednesday that the government will try to make sure the joint team's formation doesn't cause any negative effects on South Korean players.

"It is the government's basic stance that we will make sure there is no negative impact on our athletes,'' Tae-hyun said.

The South Korean team recently returned to the country after holding a training camp in the United States. Canadians Danelle Im and Caroline Park are on the South Korea roster.

South and North Korea played against each other in the lower tier of the 2017 world championship. The South shut out the North 3-0.

South Korea is in a group with Switzerland, Sweden and Japan at the Olympics and opens preliminary round play on Feb. 10 against the Swiss.

— With files from The Associated Press

Hamilton takes Portuguese GP pole position ahead of Bottas
Oct 24, 2020 12:11 PM
Comments
We welcome your feedback and encourage you to share your thoughts. We ask that you be respectful of others and their points of view, refrain from personal attacks and stay on topic. To learn about our commenting policies and how we moderate, please read our Community Guidelines.