TORONTO — The Toronto Wolfpack will open the Super 8s playoffs July 30 at the York City Knights with two more away games to come before four straight at home.
0
Jul 19, 2017 10:31 AM By: Canadian Press 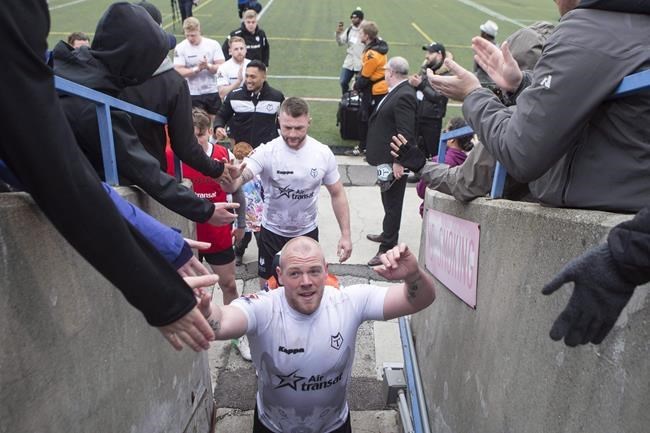 TORONTO — The Toronto Wolfpack will open the Super 8s playoffs July 30 at the York City Knights with two more away games to come before four straight at home.

The first-year Wolfpack (15-0-0) topped the regular-season standings in the Kingstone Press League 1, the third tier of English rugby league.

Under Rugby Football League rules, the 16-team league is split into two after each team has played the other. The top eight take part in the Super 8s, bidding for two promotion spots to the second-tier Championship. The bottom eight meet to contest the League 1 Shield.

In the Super 8s, the top four teams get four home games while the bottom four have three home fixtures.

The teams carry forward their regular-season points with the top team after the Super 8s winning automatic promotion. The other promotion spot will be decided via a four-team playoff: No. 2 versus against No. 5 and No. 3 versus No. 4, with the winners playing off for the prize.

Toronto, which enters the Super 8s with a three-point lead over Whitehaven, faces eighth-place Workington Town (7-7-1) on Aug. 6 after fourth-place York (10-5-0). The Wolfpack wrap up the away portion of the schedule Aug. 23 at the seventh-place Keighley Cougars (7-7-1).

Toronto, a fully professional side playing against semi-pro opposition, outscored those seven teams 386-95 during the regular season.

The Wolfpack, rugby's first transatlantic team, wanted to start higher up the rugby league ladder but were forced to begin life in the third tier.

Larry Walker Sr. proud his son voted into National Baseball Hall of Fame
Jan 22, 2020 4:00 AM
Canadian Milos Raonic advances to third round at Australian Open
Jan 22, 2020 1:45 AM
Tuesday's Games
Jan 22, 2020 12:42 AM
Comments
We welcome your feedback and encourage you to share your thoughts on this story. We ask that you be respectful of others and their points of view, refrain from personal attacks and stay on topic. To learn about our commenting policies and how we moderate, please read our Community Guidelines.