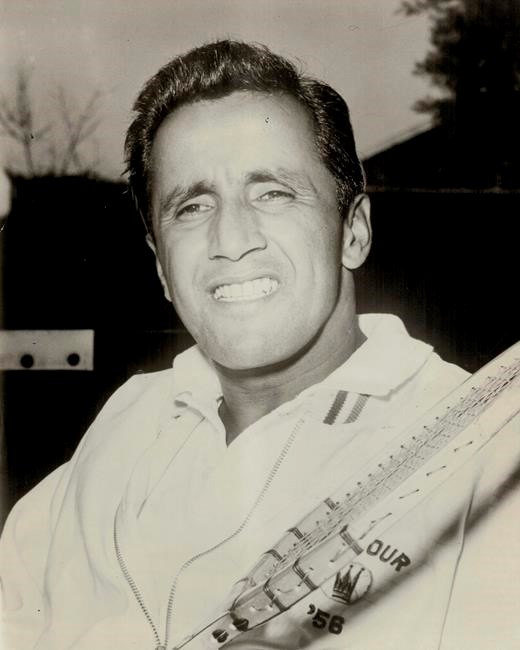 CARLSBAD, Calif. — Pancho Segura, who rose from poverty to win six U.S. Pro singles and doubles championships and was one of the world's top amateur tennis players in the 1940s and professionals in the 1950s, has died. He was 96.

Segura died Saturday from complications of Parkinson's disease at his home at the Omni La Costa Resort & Spa in Carlsbad, California, his son, Spencer Segura of Connecticut, said Sunday.

Inducted into the International Tennis Hall of Fame in 1984, Segura went from amateur to barnstorming pro as a player, then became a coach, including of Jimmy Connors, an eight-time major singles champion.

Francisco Olegario Segura was born into poverty in Ecuador. Childhood rickets bowed his legs. Too weak for soccer, he took to tennis while working as a ball boy at a club in Guayaquil.

"I taught myself how to play," Segura told ESPN in 2009. "And I worked at it, day after day, for hours, hitting on the backboard, begging people to play a little bit with me."

He developed into a South American champion player. Word reached University of Miami head coach Gardnar Mulloy, who recruited him for the school on a scholarship. Segura went on to win the NCAA singles championship three years in a row, from 1943 to 1945.

From there he moved to the amateur circuit and was a singles semifinalist four times at the U.S. Championships, the precursor to what is known today as the U.S. Open. He was a runner-up in men's doubles and mixed doubles twice apiece at major tournaments in the 1940s.

Although he stood only 5 feet, 6 inches, Segura held his own against larger and more powerful opponents. He had a unique and devastating two-handed forehand.

"I played with the speed of a bullet," Segura told The San Diego Union-Tribune in 1987. "Great eyes, great hands, great under pressure. I was a fighter, a killer. I hated to lose to anyone. My concentration was so intense. I could do anything with the ball."

He also gained the reputation as a master strategist.

To make a living, Segura turned professional in 1947, about two decades before pro players were admitted to Grand Slam tournaments. He around the world on barnstorming tours with the likes of Bobby Riggs and Pancho Gonzalez.

"I played on islands that were specks in the Indian Ocean," he told The Los Angeles Times in 1991. "I played for the sheikh of Kuwait, and I played at midnight in Madrid for $1,000. Errol Flynn used to send a car to pick me up."

He continued to watch and analyze tennis matches well into his 90s, his son said.

Coming from poverty, Segura discounted the popular view of tennis as a sport of the wealthy.

It "doesn't take more than a racket and a heart to play this game," he told ESPN. "It's a great test of democracy in action."

Canada's Jeff Smith wins way back to PDC pro darts tour via qualifying school
Jan 19, 2020 6:17 PM
Sunday's Games
Jan 19, 2020 5:58 PM
Comments
We welcome your feedback and encourage you to share your thoughts on this story. We ask that you be respectful of others and their points of view, refrain from personal attacks and stay on topic. To learn about our commenting policies and how we moderate, please read our Community Guidelines.