CALGARY — The Calgary Stampeders will get their shot at Grey Cup redemption. Calgary advanced to the CFL's championship game for a second straight year Sunday by downing the visiting Edmonton Eskimos 32-28 in the West Division final.
Nov 19, 2017 10:55 PM By: Canadian Press 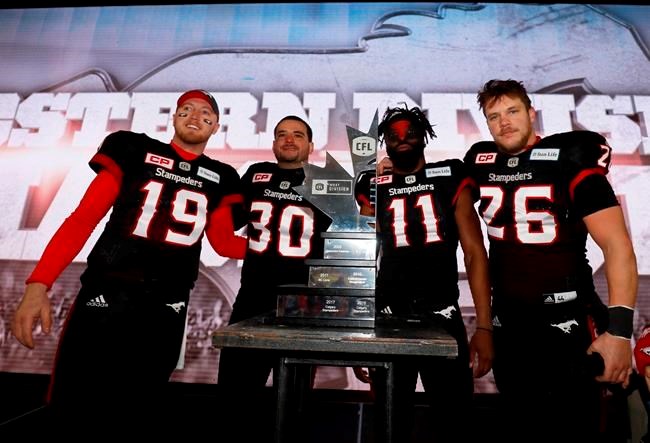 CALGARY — The Calgary Stampeders will get their shot at Grey Cup redemption.

Calgary advanced to the CFL's championship game for a second straight year Sunday by downing the visiting Edmonton Eskimos 32-28 in the West Division final.

The Stampeders, whose 13-4-1 regular-season record was the league's best, will face the Toronto Argonauts next Sunday in Ottawa for the title.

"Last year was a success, but it didn't mean a lot when you can't finish," Stampeder head coach Dave Dickenson said.

"Winning the West is not going to be enough. If we can't finish the deal and get the job done against a great opponent, well-coached, it's going to feel hollow again."

The Stampeders appear in their fifth Grey Cup in a decade with previous wins in 2008 and 2014.

Calgary had lost three in a row heading into Sunday's game, but the Stampeders recovered their winning form. The defence held the CFL's No. 1 offence to 18 points for three quarters.

Finch, a finalist for the CFL's best special teams player this year, totalled 233 yards in returns, receiving and rushing.

Mitchell, who has played through an undisclosed injury in his throwing arm for much of the season, completed 20-of-32 passes for 228 yards.

It was a harder road to the championship game in 2017 for the Stampeders and their quarterback.

"It means the world to me," Mitchell said. "It's what I play this game for. I expect to be back there every single year and do what I can to make sure I lead my team to the Grey Cup every single year.

"We did what we did in the regular season, but obviously coming into that three-game losing streak we had a little bit of desperation going into this game, and doubt from a lot of people."

Quarterback Mike Reilly, C.J. Gable and Derel Walker scored touchdowns for the Eskimos, who finished third in the division at 12-6.

Reilly, the West nominee for the CFL's Most Outstanding Player award, was 23 for 38 in passing for 348 yards.

Kicker Sean Whyte missed field-goal tries from 42 and 30 yards, but made them from 34 and 20 yards.

Trailing by a converted touchdown, the Eskimos chose to kick a 20-yard field goal with one minute 43 seconds remaining instead of gambling on third and four.

Calgary punted with 24 seconds remaining. Edmonton's Jamill Smith fumbled the ball on the return and the Stampeders recovered to close out the win.

"We have faith in our whole football team that the defence was going to make the stop, the special teams were going to get the ball back for us and the offence would do their job and go down and score," Edmonton head coach Jason Maas said.

"Ultimately it didn't turn out that way."

Messam stretched over the goal-line to finish a 14-yard carry for a 30-15 lead in the third quarter.

The Eskimos scored on their first two possessions of the game, but the Stampeders countered with three straight touchdowns in the second quarter for a 22-15 halftime lead.

What was a gentle breeze at kickoff accelerated to swirling gusts over 30 kilometres per hour in the second half at McMahon Stadium, where the announced attendance was 30,116.

The wind altered the trajectory of Whyte's 30-yard attempt in the third quarter as the ball struck the upright and landed dead.

Finch dipsy doodled 50 yards to the end zone and Messam's three-yard carry added a two-point convert with 22 seconds to go in the first half.

Marken Michel capped a 41-yard drive taking the hand off from Mitchell and scampering 13 yards to score at 11:54. Calgary scored on the first drive of second quarter when Mitchell threw a 10-yard pass to McDaniel.

Reilly connected with an uncovered Walker for a 69-yard touchdown at 8:44 of the first quarter. On a third-down gamble, Gable punched the ball in from eight yards to score on Edmonton's first drive.

Note to readers: This is a corrected story. A previous version had the incorrect number of touchdowns thrown by Bo Levi Mitchell.