HALIFAX — Hockey superstar Sidney Crosby will mark his 30th birthday by once again parading the Stanley Cup in his home province of Nova Scotia. In tweets sent out by the Sidney Crosby Hockey School in Cole Harbour, N.S.
0
Jul 19, 2017 12:00 PM By: Canadian Press 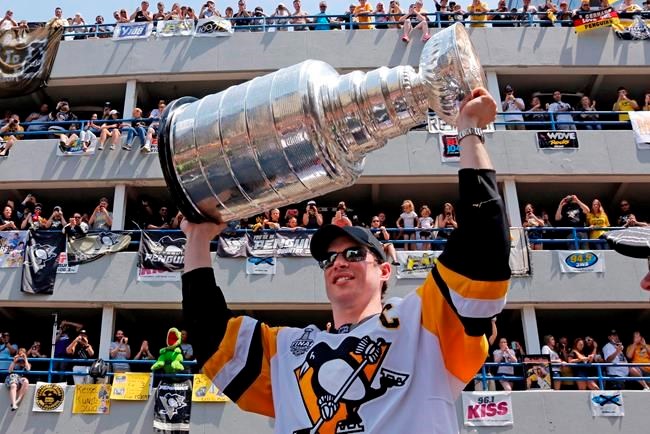 HALIFAX — Hockey superstar Sidney Crosby will mark his 30th birthday by once again parading the Stanley Cup in his home province of Nova Scotia.

In tweets sent out by the Sidney Crosby Hockey School in Cole Harbour, N.S., residents were told Crosby would be hoisting the trophy in the streets of Halifax and Dartmouth as part of an annual civic parade.

"Get ready, the Stanley cup is coming to town!" Crosby confirmed in the tweet sent late Tuesday night. "I will be taking Lord Stanley to the streets Monday August 7th in the Halifax—Dartmouth Natal Day parade."

Natal Day chairman Greg Hayward said he expects another 25,000 people will be lining the parade route on top of the roughly 40,000 usual attendees.

"It's extremely exciting to think that we're going to have Sid and the Cup in our Natal Day parade," Hayward said in an interview Wednesday.

Hayward said Crosby's people had approached him roughly 10 days ago about his possible inclusion in the parade, but it wasn't confirmed until he saw the tweet Tuesday night.

"They had some certain requirements as far as Sidney and the Cup's safety go and they talked to me about that, and we must have given them all the right answers, because they came out last night and said, 'We're in'," said Hayward.

The four-kilometre parade starts at 10 a.m. on Gottingen Street in Halifax's north end and will travel across the Macdonald Bridge before ending up near Sullivan's Pond in Dartmouth.

Crosby has shown off professional hockey's most prestigious trophy twice before in his hometown of Cole Harbour, just outside Dartmouth, in 2009 and 2016.

Last July, Crosby carried the Cup in the back of a pickup that made its way to an arena in Cole Harbour as thousands of cheering fans looked on in sweltering heat.

At a news conference last Wednesday, Crosby recalled hoisting the Cup above his head many times as the truck crawled along the Forest Hills Parkway for just over half a kilometre.

"I had a little bit of a later night the night before, too, so it was tough,'' he told reporters at his hockey school in Cole Harbour, where he had stopped by to help coach some young players.

"But it was fun. To see everyone turn out, you see all the chairs and everyone camped out on the sides. It's an experience. When you think about bringing the Cup home, that's the snapshots you have, seeing the amount of people that are there.''

Each player of the Cup-winning NHL team gets brief custody of the trophy.

Canada's Larry Walker elected to Baseball Hall of Fame in Cooperstown
Jan 21, 2020 11:48 PM
Comments
We welcome your feedback and encourage you to share your thoughts on this story. We ask that you be respectful of others and their points of view, refrain from personal attacks and stay on topic. To learn about our commenting policies and how we moderate, please read our Community Guidelines.