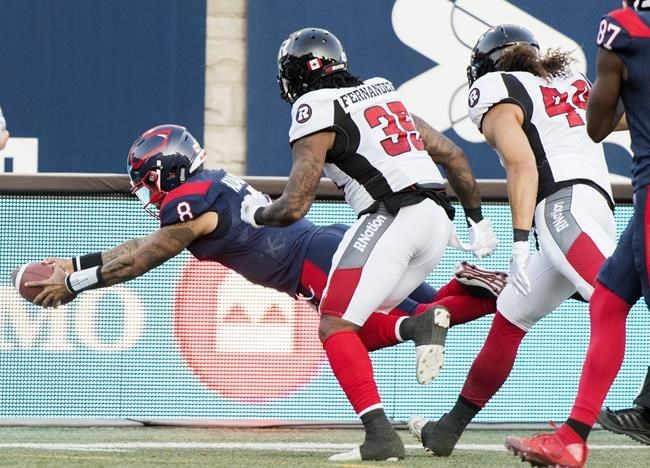 The Montreal Alouettes appear to have two key offensive performers back.

Quarterback Vernon Adams Jr. and running William Stanback both resumed practising this week. They on the injured list for last week's 17-10 loss to the Saskatchewan Roughriders, a game that was called late in the third quarter due to inclement weather.

Antonio Pipkin started at quarterback against Saskatchewan but was replaced by Matt Shiltz. The Alouettes (3-4) visit the Calgary Stampeders (5-3) on Saturday night.

Both Adams (concussion) and Stanback (lower body) were hurt in Montreal's 30-27 overtime loss to the Ottawa Redblacks on Aug. 2. Adams had led the Alouettes to three straight wins before being hurt.

Adams took over starting duties when incumbent Pipkin was injured in Montreal's season-opening 32-25 loss in Edmonton.

The six-foot, 233-pound Stanback has been a major offensive contributor for Montreal. He's the CFL's second-leading rusher with 592 yards on 87 carries (stellar 6.8-yard average) with four TDs while adding 15 catches for 161 yards.

Posey, 29, is coming off a calf injury. He has nine catches for 100 yards and a TD this season.

Of course, the big question with Calgary is whether quarterback Bo Levi Mitchell will play. Last year's league and Grey Cup MVP resumed practising late last week after suffering a torn pectoral muscle in the Stampeders' 36-32 win over the B.C. Lions on June 29.

Calgary didn't skip much of a beat under backup Nick Arbuckle, who has gone 4-2 as the team's starter. Arbuckle was 22-of-35 passing for 260 yards with a TD and two interceptions in the Stampeders' 26-24 road loss to Winnipeg last week.

Overall this season, Arbuckle has completed 143-of-201 passes (71.1 per cent) for 1,733 yards with seven TDs and five interceptions. He has also rushed for 54 yards and three touchdowns.

Calgary's ground attack could also be bolstered with both Don Jackson and Ka'Deem Carey participating in practice this week. Carey suffered a lower-body injury in the Stampeders' 17-16 win over Ottawa on July 25 while Jackson had been on the six-game injured list with an upper-body ailment.

Montreal hasn't won a regular-season game at McMahon Stadium since 2009. Its last victory there came later that year with a 28-27 Grey Cup decision over Saskatchewan. In that game, Als kicker Damon Duval missed a 43-yard field goal with five seconds remaining and the Riders leading 27-25.

However, Saskatchewan had 13 players on the field. Duval made good on his second chance, making the game-winning 33-yard attempt for Montreal.

At Winnipeg, the Bombers (6-2) chase a fifth straight home win and their first sweep of B.C. since 2016. Starter Matt Nichols is 6-3 over his career versus the Lions while running back Andrew Harris needs just 65 yards to surpass Ben Cahoon (13,368) as the all-time leading Canadian in scrimmage yards. Mike Reilly will again start for the Lions (1-7) despite suffering an ankle injury in Saturday night's 35-34 road loss to Hamilton.

At Toronto, the Argos (1-6) come off the bye looking for a second straight win. McLeod Bethel-Thompson threw for 343 yards and three TDs in a 28-27 home win over Winnipeg on Aug. 1. Running back James Wilder Jr. resumed practising this week after missing two games with a reported rib injury. Edmonton (5-3) has just one road with this season but still boasts the CFL's passing leader in Trevor Harris (2,631 yards) and a defence that's tops in fewest offensive points allowed (16.5 per game) and sacks (26).

At Ottawa, Hamilton (6-2) is the only East Division squad with a winning record. The Ticats are without quarterback Jeremiah Masoli for the rest of the season but still lead the CFL in offensive points (28.5 per game) and touchdowns (28). Last week, Dane Evans hit Brandon Banks with a 23-yard TD pass with just over a minute remaining for the win over B.C. despite John White running for 124 yards and two TDs for the Lions. The Redblacks (3-5) are coming off a 16-12 loss to Edmonton but the Eskimos accumulated 447 offensive yards and had the ball for over 35 minutes.