BERN, Switzerland — Emerging from a seven-hour interrogation by Swiss investigators, Paris Saint-Germain president Nasser Al-Khelaifi insisted he had "nothing to hide" despite allegations he bribed a FIFA official in a World Cup broadcasting rights d
0
Oct 25, 2017 1:47 PM By: Canadian Press 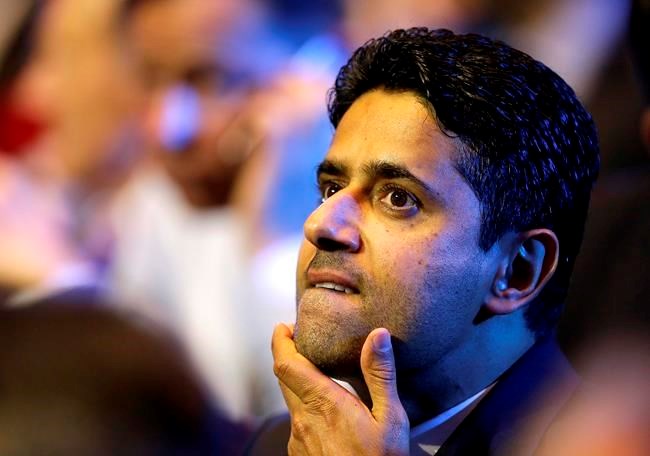 BERN, Switzerland — Emerging from a seven-hour interrogation by Swiss investigators, Paris Saint-Germain president Nasser Al-Khelaifi insisted he had "nothing to hide" despite allegations he bribed a FIFA official in a World Cup broadcasting rights deal.

Al-Khelaifi, a Qatari soccer and television executive with close ties to the gas-rich emirate's ruler, met with Switzerland's federal prosecutors two weeks after they revealed criminal proceedings against him.

"I answered questions, I have nothing to hide," Al-Khelaifi told reporters outside the offices of Switzerland's attorney general.

As CEO of beIN Media Group — formerly Al Jazeera Sports — Al-Khelaifi secured TV rights across the Middle East and North Africa for four World Cups, including the 2022 tournament in Qatar.

Key to the allegation is a luxury villa on the Italian island of Sardinia that was seized two weeks ago, and which Al-Khelaifi made available for Valcke to use.

"I am available for the Swiss prosecutors if they want to see me again," said Al-Khelaifi, who has not been charged. "I came here peacefully and I leave very peacefully."

He remains a criminal suspect in the type of case that can take "years, not just months" in the Swiss system, said Andre Marty, a spokesman for the federal prosecution office.

"I can confirm that Mr. Al-Khelaifi was ," Marty told reporters. "Now it needs to be analyzed and it needs to be seen if that is sufficient for the ongoing criminal proceeding."

Al-Khelaifi's case is one of the most direct links to Qatar announced by federal law enforcement agencies in Switzerland, the United States, and France, who are on separate but linked investigations of FIFA, World Cup hosting bids and corruption implicating international soccer leaders.

American and French law enforcement agencies were not present Wednesday in Bern. Around 12 people attended at least parts of the session, including a lawyer representing FIFA.

Swiss prosecutors have been investigating FIFA and suspected money laundering linked to the 2018 and 2022 World Cup hosting contests since November 2014.

Criminal proceedings for suspected financial wrongdoing were first opened last year against Valcke, months after his emails were among evidence seized from FIFA. The former TV presenter from France was the CEO-like top official under then-FIFA president Sepp Blatter for more than eight years until he was fired in January 2016.

The separate proceeding against Al-Khelaifi and Valcke was opened in March. It was revealed only this month, one day after Valcke returned to Switzerland to testify at the Court of Arbitration for Sport in his appeal against a 10-year ban by FIFA.

In raids on Oct. 12, properties were searched in France, Greece, Italy, and Spain — including beIN's offices in Paris — while Valcke was brought to Bern for questioning.

Italian financial police say Al-Khelaifi allowed Valcke to use a vacation property in Porto Cervo, which was valued at 7 million euros ($8.3 million). Italian police said the villa is officially owned by an international real estate company, and they questioned eight people.

The 43-year-old Al-Khelaifi is a close friend of Qatar's Emir, Sheikh Tamim bin Hamad Al Thani. He was appointed to run PSG when it was bought by a Qatar sovereign wealth fund within months of FIFA picking Qatar as a World Cup host in December 2010.

PSG is not publicly implicated in the Swiss case.

Al-Khelaifi risks an interim ban from soccer duty by the FIFA ethics committee while investigations continue. FIFA has said its ethics investigators are making preliminary inquiries though no formal case has been opened.

The latest Swiss case also involves a third suspect — a "businessman in the sports rights sector" who has not been identified by prosecutors. That relates to giving Valcke "undue advantages" for the awarding of World Cup broadcast deals from 2018 through 2030.

Since the case against Al-Khelaifi was formally opened, his profile rose as PSG pursued and completed a world record transfer for Brazil striker Neymar from Barcelona for 222 million euros ($260 million).

PSG leads the French league and is looking for its first Champions League title. Al-Khelaifi has attended the team's games, in France and Belgium, since he was made a criminal suspect and consented to be interviewed in the Swiss capital.

Canada's Jeff Smith wins way back to PDC pro darts tour via qualifying school
Jan 19, 2020 6:17 PM
Sunday's Games
Jan 19, 2020 5:58 PM
Comments
We welcome your feedback and encourage you to share your thoughts on this story. We ask that you be respectful of others and their points of view, refrain from personal attacks and stay on topic. To learn about our commenting policies and how we moderate, please read our Community Guidelines.