TAMPA, Fla. — It took longer than the Lightning wanted, but the NHL's top team finally prevailed against a struggling Atlantic Division foe.
0
Dec 22, 2017 12:16 AM By: Canadian Press 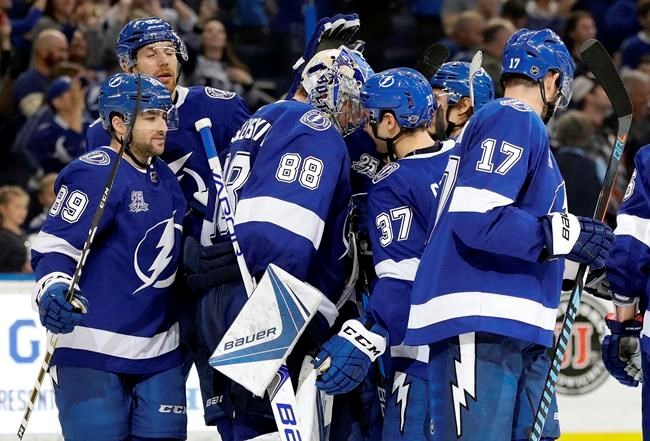 TAMPA, Fla. — It took longer than the Lightning wanted, but the NHL's top team finally prevailed against a struggling Atlantic Division foe.

Tampa Bay never led against the Ottawa Senators until Brayden Point and Steven Stamkos scored the only shootout goals, lifting the Lightning to a 4-3 victory on Thursday night, their eighth win in nine games.

"We're a veteran team," Stamkos said. "We're seasoned, and we understand that the game is 60 minutes. It may take 65 and a couple of shootouts to win the game. There's just no panic in this group."

Tampa Bay threatened to win on a power play at the end of overtime, but Nikita Kucherov's shot past Craig Anderson was launched a split-second after the buzzer.

Ottawa broke out on top in unusual fashion. Bobby Ryan was credited with an unassisted goal 6:31 into the game after Dan Girardi's attempt to clear a rebound glanced off the shin of fellow Lightning Braydon Coburn and past Vasilevskiy.

Twelve minutes into the second period, Tampa Bay pulled even on a delayed penalty with a deflected goal of its own. Kucherov blasted a shot from the top of the right circle that glanced off teammates Tyler Johnson and Alex Killorn and through the legs of Anderson.

The Senators regained the lead on a backhander by Cody Ceci with 5:26 remaining in the second. Yanni Gourde tied it again just over a minute later.

"Once we get the lead, we get a little passive, and that's something that we're going to have to work on," Senators captain Erik Karlsson said. "We gave them a little too much room. We were up by a goal and we let them come back a little too easy. That's going to happen, unfortunately, against good teams like this."

Vasilevskiy needed to make only 18 saves in his league-leading 22nd victory. Anderson made 35 stops for Ottawa, which has lost all but three of its last 17 games.

"The second period we really tilted the ice," Lightning coach Jon Cooper said. "Give Anderson credit. He was kicking everything out."