TORONTO — Patrick McCaw missed playing competitive basketball, but he missed the professional atmosphere of an NBA locker room even more. The 23-year-old McCaw spoke with media on Friday a day after signing with the Toronto Raptors.
0
Jan 11, 2019 6:30 PM By: Canadian Press 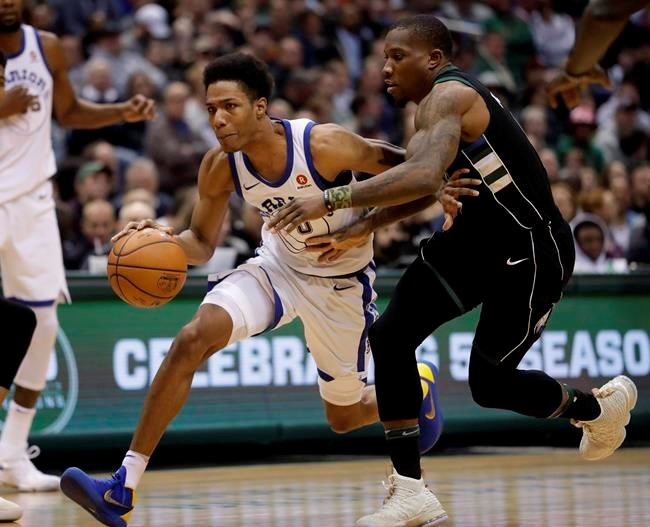 TORONTO — Patrick McCaw missed playing competitive basketball, but he missed the professional atmosphere of an NBA locker room even more.

The 23-year-old McCaw spoke with media on Friday a day after signing with the Toronto Raptors. He was excited about the deal that ended three months in free-agent limbo after being under contract with the Golden State Warriors and a brief stint with the Cleveland Cavaliers.

"Just to be back in the flow of the NBA, regardless of if it's a day, if it's a year, like just being back in that atmosphere, around coaches and players who know the game and can help you grow," said McCaw. "That's all I've been waiting for the past couple months. It's exciting I've gotten this opportunity and ready to get to work."

McCaw played 128 games with Golden State for the 2016-17 and 2017-18 seasons and the Warriors held his rights as a restricted free agent this season. However, they elected to not match the two-year, US$6-million offer sheet that he signed with the Cavaliers on Dec. 28 — with the potential luxury tax ramifications among the factors.

After three games with Cleveland he was waived before his contract would have been guaranteed for the remainder of this season. He cleared waivers and became an unrestricted free agent, opening the door to joining the Raptors.

"Everything kind of happened pretty fast. Going from patiently waiting for offer sheet, it happened so quickly, getting that call and I was just back working," said McCaw. "The past couple weeks have just been all over the place but it's exciting because I know I'm back working, I know I'm back getting the opportunity that I feel like I deserve."

The NBA is reportedly looking into the circumstances surrounding his short-lived time with the Cavaliers.

Toronto head coach Nick Nurse met with McCaw briefly on Friday morning but wasn't sure what role the guard will have on the Raptors just yet.

"Hopefully he can space and attack and handle the ball and he can defend," said Nurse. "Those are the things he's supposed to be able to do. Pretty interesting defender. I think he sees the game pretty well from what I've watched, film-wise. He's a little bit of a risk-taker defensively, but that's OK, we like that."

While he was a free agent, McCaw worked on becoming dangerous on both sides of the ball.

McCaw was in the Raptors lineup as Toronto hosted the Brooklyn Nets on Friday night.