PYEONGCHANG, Korea, Republic Of — A pair of photos hang framed beside Brad Bowden's bed in the Pyeongchang athletes village. One is of his recently deceased Boston Terrier Johnny Cash.
Mar 9, 2018 7:00 AM By: Canadian Press 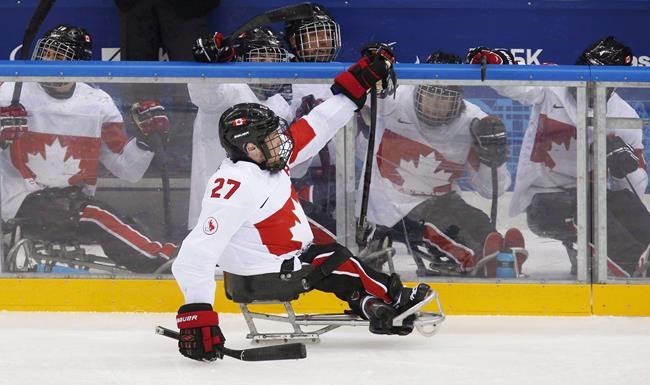 PYEONGCHANG, Korea, Republic Of — A pair of photos hang framed beside Brad Bowden's bed in the Pyeongchang athletes village.

One is of his recently deceased Boston Terrier Johnny Cash. The other is of his grandfather Gerry Nelson, who died last year of lung cancer.

The photos were hung by Canadian Paralympic team staff in Pyeongchang before his arrival, but the 34-year-old para hockey player from Orton, Ont., appreciates the sentiment.

The Paralympic gold medallist in both hockey and wheelchair basketball hopes to lead Canada to the top of the medal podium again in Pyeongchang. But his celebrations might be muted. The people he's always had in his corner — his grandparents — aren't here to share it.

"It's tough," Bowden said after a recent practice. "I'm lucky because on one hand they were both around to get to see me win a gold medal in both wheelchair basketball and sledge. So they were around for some of the best moments of my sporting career which is good.

"But at the same time, the biggest thing that really gets me is I wish they could see where I am now, and how much better I got, and how much I grew as a player. I just remember them giving me every opportunity to be the best that I could be. It sucks that they can't see the outcome of that."

Bowden was born with sacral agenesis, which he explained with a not-sweating-the-details kind of shrug as "something that affects my spine. I've never even cared to look into it. I'm in a wheelchair, that's about the extent."

Babies born with this congenital disorder have abnormal development of the lower spine. Sometimes doctors choose to amputate the non-functioning legs of children affected to help improve mobility.

Bowden's biological mother was young and single, and "had trouble managing all the things that come with raising a disabled kid," he said.

So his grandparents — Gerry worked construction, Colleen was a keypunch operator for Mr. Christie — filed for custody. Colleen quit her job to care for Bowden full time. He has no contact with his biological parents.

It was Colleen who cajoled him away from his Nintendo and into wheelchair basketball, refusing to listen to his persistent protests.

"I said no, because I didn't want to play a disabled sport," Bowden said. "And I think my grandmother had to phone around a few places, knock on some doors and find out what was out there. I honestly don't even know how she found out about it or how she got it going."

The death of his grandparents didn't just hit Bowden hard. Some of his teammates took the losses hard. Because Colleen's unflagging encouragement, and Gerry's constant presence didn't stop at Bowden.

"His grandparents took me in a lot, they would drive me to practice, they would let me stay at their place, feed me," said Canadian team veteran Billy Bridges. "His mom — or his grandma, we called her his 'mom' — made a mean mashed potatoes. They really did take care of not just him but anyone who was around.

Bridges met Bowden at an Easter Seals camp when they were nine or 10. Colleen reached out to Bridges' parents about Paralympic sport.

"I have never played hockey without (Bowden), it's kind of funny to think about," Bridges said. "It was 24 years ago when I started playing, it was him that brought me there, him and his grandmother. We made the national team together. We played spoon hockey in the hallway. We played mini-sticks. His grandpa would shovel the outdoor rink in Orton, and we would go and play hockey all the time.

"I couldn't imagine hockey without him."

Bowden hasn't decided whether Pyeongchang will be his last Paralympics, but he bears the scars of a career well-played. He almost lost his left thumb just before the 2002 Salt Lake Paralympics in a game against Norway. He was reaching for a puck when a Norwegian player turned quickly, pushing his hand into his sled blade.

He spotted the hole in the leather of his glove before he pulled it off. His hand was a soupy mess of flesh and blood.

"I could see my tendon. It was pretty gross," he said.

Perched in his chair in the interview area at Gangneung Hockey Centre this week, Bowden lifted up both battered hands for display. They're the meaty hands of a labourer. That's because he didn't use a wheelchair when he was young, preferring to walk on his hands. His friends called him "Silverback." He was cool with the nickname.

"It was fine," he said. "Those are crazy, powerful animals. That is a compliment."

He added: "But it's screwed up my hands a lot. I'll probably have arthritis when I get older."

Bowden had to get over the stigma that came with the wheelchair, he said. He started using it in high school.

"When you're at that (younger) age, nobody judges anybody, you just accept it because that's the way things have been," he said. "And then you get into high school, and you're self-conscious, you want to have a girlfriend, meet girls.

Off the ice, Bowden works for a non-profit organization that creates inclusive sports programs in and around Simcoe County called "All Sports All People." He encourages kids the way his grandparents nudged him.

"My proudest moment in my life was when I had my grandfather in the crowd at a tournament, and he told me while I was playing he heard one of the parents turn to another parent and say 'My son wants to be like Bowden when he grows up.'

"I thought 'That's pretty cool,' not just for me so much but for my grandfather to hear that. My grandparents raised somebody that other people wanted to look up to."

The Canadians open the Paralympic tournament against Sweden on Saturday. They'll play Italy on Sunday and Norway on Monday. The semifinals are March 15, and the medal games March 17 and 18.

"So I kind of remember that whenever things get tough and I feel like disappearing for awhile, or saying the heck with it. Just remembering all the hard work that not only I put in, but they put in too."