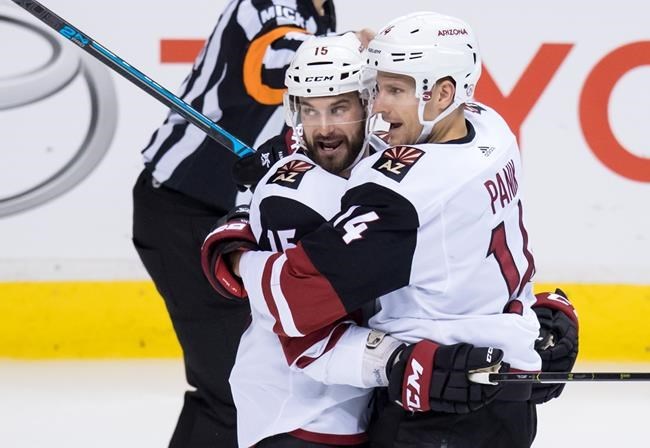 The Vancouver Canucks goalie was frustrated Thursday night after his team dropped a 4-3 overtime decision to the Arizona Coyotes, in part because of a second-period goal from Nick Cousins that Markstrom said was kicked into the net.

The Canucks challenged the play but after a review, officials ruled the Cousins' goal was good.

The Vancouver netminder stopped 18-of-22 shots on Thursday night as his team clawed their way back from three separate one-goal deficits.

Sven Baertschi had a pair of goals for the Canucks (20-21-5) and Adam Gaudette added another.

The loss marked Gaudette's return to the NHL after he was sent down to the American Hockey League's Utica Comets late last month.

The 22-year-old centre said playing in Utica helped improve his game in Vancouver.

"Each shift I felt better and better. And I felt like I just wasn't going to take no for an answer out there," he said.

Arizona's Richard Panik scored the game winner with 49.6 seconds left in overtime. It was the right-winger's second of the night and he also registered a helper on Cousins' controversial goal.

Conor Garland rounded out the scoring for the Coyotes (19-21-3), who got 33 saves from Darcy Kuemper.

Garland, a rookie, has four goals in his last three games.

"I feel like it's a character win for us today," said Arizona defenceman Niklas Hjalmarsson. "In the past if we've had these types of games we find a way to lose a lot of points and today we got both. We battled out there."

"We expected it to be a tight game. We knew it was going to be," he said, adding that the first period wasn't great offensively for either team.

Vancouver had been shut out against both the Montreal Canadiens and Toronto Maple Leafs last week and the sluggish Canucks offence carried into Thursday's match up as the team failed to register a single shot through the first 15 minutes.

The Coyotes fared only slightly better, putting up five shots over the same time frame.

The squads were hedging their bets, Kuemper said.

"Both teams were playing a little safe maybe," he said. "As a goalie, I was just trying to stay ready for the first shot."

Much of the first frame was played in the neutral zone, but the Canucks kept working, said Baertschi.

"It wasn't the prettiest game but it's a game we hung around in and had a chance to win it really in the third. Too bad we came up short," he said.

The left-winger put Vancouver on the board early in the second period with a highlight-reel move where he deked out Arizona defenceman Jakob Chychurn by putting the puck through his legs, then sailed it up over Kuemper's arm.

It was Baertschi's first time playing in Vancouver since he suffered a concussion in October, forcing him to miss 30 games.

He returned to the lineup during the Canucks' recent six-game road stretch and Green said at the end of the trip he challenged Baertschi to up his play.

"I showed him a few clips. He had his five games to get back into it. I wanted him to be better than he was and he was tonight," the coach said.

The Canucks will be back in action Sunday afternoon when they host the Florida Panthers. The Coyotes are off to Edmonton where they'll battle the Oilers on Saturday.

NOTES: Alex Galchenyuk continued his point streak with an assist on Thursday. The Coyotes centre has four goals and seven helpers in his last 11 games. ... Vancouver's leading scorer Elias Pettersson remains sidelined by a knee injury. The Canucks rookie has 42 points in 38 games.

Montreal Impact return to training centre for individual outdoor workouts
May 25, 2020 5:44 PM
Comments
We welcome your feedback and encourage you to share your thoughts. We ask that you be respectful of others and their points of view, refrain from personal attacks and stay on topic. To learn about our commenting policies and how we moderate, please read our Community Guidelines.