The venerable supports of pandemic-era sports media coverage — television and streaming — have been critical lifelines for reporters tasked with remote filing in the absence of regular in-person access.
May 6, 2021 10:36 PM By: Canadian Press 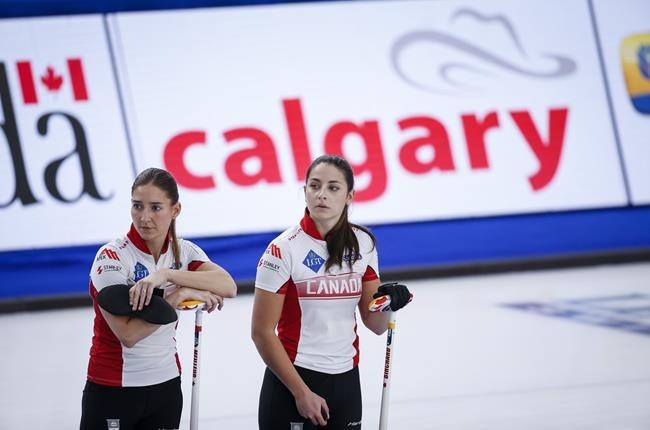 The venerable supports of pandemic-era sports media coverage — television and streaming — have been critical lifelines for reporters tasked with remote filing in the absence of regular in-person access.

When those feeds are not available, viewers, fans and media members alike are forced to scramble for unusual alternatives. The unforeseen broadcast shutdown at this week's world women's curling championship in Calgary has forced a significant pivot in the delivery and quest for information.

With the WinSport Arena closed to media and most of the event not on TV, details have been scarce in recent days in the spectator-free curling bubble.

Reporters have been forced to cobble stories together from federation social media feeds, shot-by-shot graphics, linescores, and even a raw overhead feed of the houses on the four sheets.

"My eyes are blurry and my fingers, I think I have carpal tunnel," said CBC Sports reporter Devin Heroux. "I have way too many webpages open at once and I'm toggling between all of it. It's like a puzzle because you're trying to piece together what's going on."

Domestic and international feeds were shut down last Sunday after four positive COVID-19 cases were identified among event broadcast staff, who remain in isolation. That number increased to seven on Monday but hasn't risen since.

With other broadcast staffers returning negative PCR test results through the week, the World Curling Federation was given clearance Thursday evening to use an "adapted TV production setup'' for the final weekend.

Coverage on TSN will resume with Canada's round-robin finale against China on Friday morning. World Curling TV is used for international feeds.

Meanwhile, media members have been trying their best in recent days o make sense of what has been happening on the ice. Players are still made available for brief post-game video calls but generating quality in-game information can be heavier lifting.

"When you can't see a curling game, it's a challenge," Heroux said.

The WCF and Curling Canada, who have staff members on site at the Markin MacPhail Centre, have tried to provide as much detail as possible given the circumstances.

Team statistics on the WCF website are refreshed every 30 seconds during game action. Shot by shot visuals of stone placements around the rings are displayed on whiteboard-style graphics.

Curling Canada's Twitter feed has been an invaluable resource for fans and media alike with detailed shot descriptions mixed in with photos and video snippets.

"We've been trying not only to give as much information on the Team Canada games as possible, but also to give those who don't understand about what's going on with the broadcasting situation the context of why they're not able to watch right now," Curling Canada said in an emailed statement.

"We're fortunate that our social media manager Danielle Inglis is not only a great communicator, but also knows the sport as a high-performance player, so we get the best of both worlds there. We know it's not the same as watching, but we're trying to make the best of an unfortunate situation."

TSN, meanwhile, normally broadcasts all of Canada's games at the annual event. The network has been offering a live curling blog on its website this week with recaps of each end accompanied by video links from Curling Canada.

"You just have to pivot and figure out a different way to do things," said TSN web producer Ryan Horne, who staffs many of the Season of Champions events. "It just comes down to that."

Since bubble play began with the Canadian women's championship last February, media members have been able to access a private static overhead feed of the houses on each sheet to help with coverage.

Heroux, also a CBC News and Olympics reporter, uses Twitter extensively — usually chiming in with dozens of tweets per game — to help boost his coverage.

Given the lack of broadcasting options, his unvarnished take on the action has been a welcome sight for curling fans yearning for up-to-the-second information.

Heroux said he has been inundated with similar feedback in recent days.

"To hear people around the world saying they're huddled around their phones and their computer screens following my tweets as if they would be gathered around an old transistor radio — we have gone back to simpler times," he said.

This report by The Canadian Press was first published May 6, 2021.