'One for the history books:' Horse racing back but without cheering crowds

WINNIPEG — A horse track in Manitoba has had some significant moments in its more than 60 years of racing, but animals charging around the oval loop before empty stands will be historic.
May 25, 2020 8:52 PM By: Canadian Press 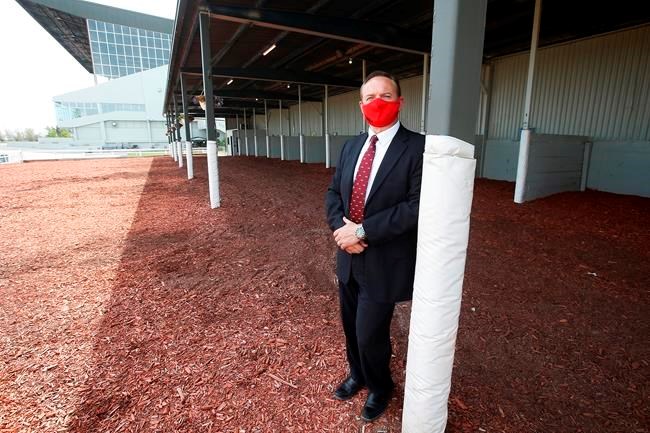 WINNIPEG — A horse track in Manitoba has had some significant moments in its more than 60 years of racing, but animals charging around the oval loop before empty stands will be historic.

"It's going to be nothing short of bizarre," said Assiniboia Downs CEO Darren Dunn.

The Winnipeg track is off to the races as the first to reopen in Canada, after sporting venues closed earlier this year to stop the spread of COVID-19.

On Monday night, however, horses and jockeys at the Winnipeg venue raced in front of a handful of staff and trainers. All people going inside were to have their temperatures taken and be wearing face masks. Not even horses' owners were allowed to watch.

"The silence is going to be deafening, outside of the thundering hooves," Dunn said.

"It's completely backwards to what we would expect to experience. No cheering crowd, nobody beating a program on their leg, no roaring and screaming. It will be very, very quiet, almost like running a library."

Bear Me a Moment, with jockey Rigo Sarmiento aboard, won the first race on the six-race card. Going off at odds of 3-1 in the Don Gray Memorial, Bear Me a Moment paid $8.40 for the win.

The track is the first to reopen in Canada, but only by a nose. Many tracks are looking to take advantage of sports fans in need of entertainment, as most major sporting leagues remain on pause.

Provinces are starting to allow the return of live horse racing without spectators, since it's relatively easy to keep athletes apart. Two of the largest tracks in Canada, Woodbine Racetrack and Woodbine Mohawk Park in the Toronto area, are looking to begin their seasons in June.

"It's been an unprecedented year, which has led to a unique stakes schedule that we are very excited about," Woodbine Entertainment CEO Jim Lawson said in a statement earlier this month.

A handful of American tracks have continued racing during the pandemic.

The Atlantic Provinces Harness Racing Commission also has events scheduled for June, while other provinces are still working out details for their tracks. Horse Racing Alberta posted online earlier this month that proposals to reintroduce racing were still going through government channels.

The famous Queen's Plate, the longest continuously run thoroughbred race in North America, has been pushed back to September at Woodbine.

Watching horse races could scratch the itch for sports fans who would otherwise be glued to TVs watching baseball, football or hockey.

Assiniboia Downs has moved its races to Monday, Tuesday and Wednesday nights to seek out those viewers, and to sell its racing signal all over the world.

"It's a very competitive sport," Dunn said. "It's very eye-catching, thrilling and exciting over short bursts of time."

The trend in horse racing had shifted to online wagering before the pandemic, Dunn added. The health crisis just pushes it further in that direction.

Dunn also hopes the sport picks up some additional viewers.

"I think all around it's going to be a very different experience and certainly one for the history books."

This report by The Canadian Press was first published May 25, 2020