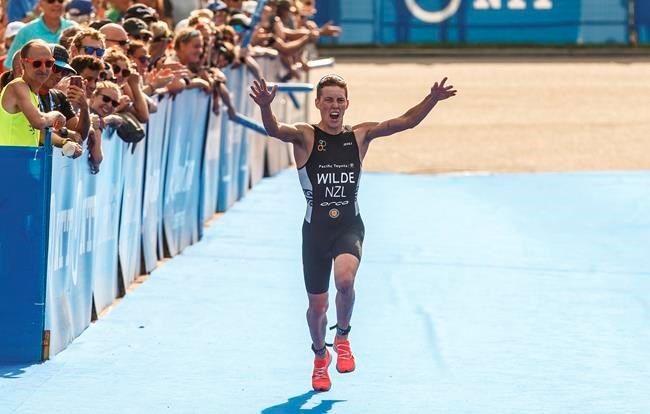 Hayden Wilde, running the anchor leg, matched Gordon Benson of Great Britain in the cycling portion, then pulled away to beat the Brits comfortably by nine seconds in the 1600-metre run.

The winning time was one hour 20 minutes and 13 seconds in the race through Edmonton's River Valley.

New Zealand, the Americans, and the British swapped in and out of the top three spots all race long.

Nicole Van Der Kaay's strong performance put New Zealand in front after the third section, 14 seconds up on the field.

Wilde said he didn't want to waste the lead.

"Everyone knows I'm not the best swimmer so I was kind of on the hunt. The guys obviously caught me (after the swim) but I knew I had to have good transition and I pretty much put my head down," said Wilde.

Reid said it was a satisfying win for a team that has been coming on in recent races.

"We have a very young team and have been so close, so close," said Reid.

"It's absolutely wicked to take the top (spot)."

Team Australia was sixth after the first leg, but slowly climbed the field and appeared poised to find the podium until assessed a 10-second penalty after Ashleigh Gentle and Matthew Hauser tagged off outside the exchange zone in the final transition.

The men's and women's WTS elite races were held Saturday.

Britain's Jonathan Brownlee cruised to victory in the men's event, capturing his first gold on the WTS circuit since 2017.

In the women's elite event, Australia's Emma Jackson came from behind to edge American Summer Rappaport by two seconds.

It was the first WTS win for Jackson, who has been dealing with nagging injuries for the last two years to her right foot and left quad.

The next ITU events are the Olympic test trials in Tokyo on Aug. 15-16 and the WTS Grand Final in Lausanne starting Aug. 29.

Canadian Mark McMorris makes Winter X Games history with 18th career medal
Jan 26, 2020 3:48 AM
Alberta to play for back-to-back women’s gold at Canadian Juniors Curling Championships
Jan 26, 2020 3:29 AM
Saturday's Games
Jan 26, 2020 1:39 AM
Comments
We welcome your feedback and encourage you to share your thoughts on this story. We ask that you be respectful of others and their points of view, refrain from personal attacks and stay on topic. To learn about our commenting policies and how we moderate, please read our Community Guidelines.