MONTREAL — The Montreal Impact put on a textbook defensive display to progress in the CONCACAF Champions League.
0
Feb 26, 2020 11:35 PM By: Canadian Press 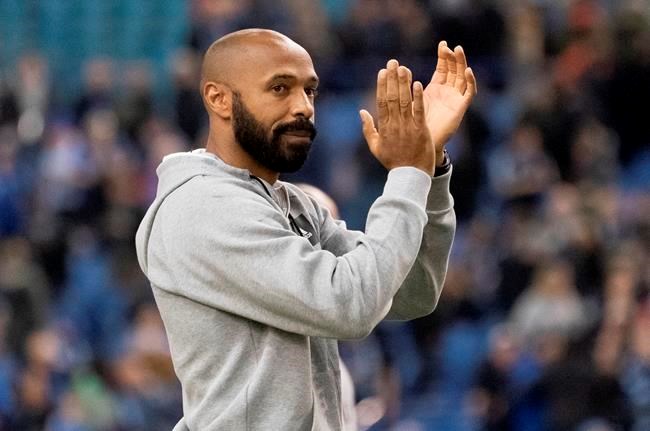 MONTREAL — The Montreal Impact put on a textbook defensive display to progress in the CONCACAF Champions League.

The Impact punched their ticket to the tournament quarterfinal following a gritty 0-0 draw against Costa Rica’s Deportivo Saprissa in the second leg of the round of 16 on Wednesday.

The teams tied the first leg 2-2 in Costa Rica last week. Those two away goals allowed Montreal to advance on aggregate.

“We knew they were going to push, especially in the second half,” said Thierry Henry, who made his home coaching debut. “But aside from a late save from Clement Diop, we did well to manage their attacks. (Saprissa) is a great team.

“There was a lot to manage but the guys fought hard. We did what we had to do.”

Neither team was willing to take too many chances, especially in the first half, for fear of opening up and making costly mistakes.

As expected, Saprissa controlled the play as they looked to slowly build from the back and through the midfield. The visitors moved the ball well and dominated possession (60 per cent) but could not pierce Montreal’s five-man back line.

Henry opted for a defensive 5-3-2 formation with Romell Quioto and Bojan up top. That changed to a 5-4-1 in the second half to withstand added pressure.

“There was a tactic on our side to make sure they couldn’t enter our midfield,” said Henry. “You have to respect that too. They finished the game better than us when we played at their place and we didn’t adjust that well. But today we did.

“All they could do was pass the ball on the side and cross early. We had to deal with that and we did.”

Saprissa kept pressing in the second, desperately looking for a goal. The Costa Rican team sent a handful of dangerous crosses into the box but the Impact did well to clear their line time and again.

In the 89th minute, Diop made his best save of the game when he dove left to deny Mariano Torres’ powerful left-footed strike from 25 yards out.

Wednesday’s second half was vastly different from last week’s, when the Impact faltered and squandered two goals to Saprissa in the final 10 minutes.

“We prepared for them better,” said midfielder Amar Sejdic. “We changed our formation tactically and we acted on it. They still kept the ball, but at the end of the day, we minimized their chances.”

The Impact improved to 9-1-3 all-time at home in the Champions League, including 10 clean sheets.

Henry’s squad will face either the Seattle Sounders or C.D. Olimpia of Honduras in the quarterfinal next month.

The 21,505 fans at Olympic Stadium did not have to wait long for any excitement.

It took less than one minute for Bojan to attack Saprissa’s back line on a defensive miscue. But goalkeeper Aaron Cruz challenged Bojan and prevented him from shooting.

Johan Venegas came close to giving Saprissa the lead in the 14th minute but his header soared over the bar, into the top netting.

“I feel very sad for the players because they played a great two games,” said Saprissa coach Walter Centeno. “We had to score and we couldn’t because the other team played very good defensively. We had control of the game but we never scored.”

Montreal’s best offensive chance came in the 45th when Quioto squared a ball into the box to Shamit Shome, whose shot from 12 yards out was right on Cruz.

Newly signed centre back Luis Binks made his Impact debut. The 18-year-old replaced Rudy Camacho, who suffered a knee injury in the first leg. Montreal also lost Quioto and Orji Okwonkwo to injuries in the opening leg.

Injuries continued to haunt the Impact in the second leg. Captain Jukka Raitala was hurt in the fifth minute, finished the half but did not return after halftime.

Notes: Diop made two saves for the clean sheet. … Saprissa are winless in their last 12 Champions League road matches. … This is the third quarterfinal Champions League appearance for Montreal (previously, 2008 and 2015).

This report by The Canadian Press was first published Feb. 26, 2020.

Harper, Matz latest MLBers to contribute to virus relief
Apr 3, 2020 7:07 PM
Calgary ban on public events includes Flames, Stampeders should leagues restart
Apr 3, 2020 7:06 PM
Comments
We welcome your feedback and encourage you to share your thoughts on this story. We ask that you be respectful of others and their points of view, refrain from personal attacks and stay on topic. To learn about our commenting policies and how we moderate, please read our Community Guidelines.