SUNRISE, Fla. — The Florida Panthers are hot at home and Roberto Luongo is doing his best to keep it that way.
Mar 8, 2018 11:50 PM By: Canadian Press 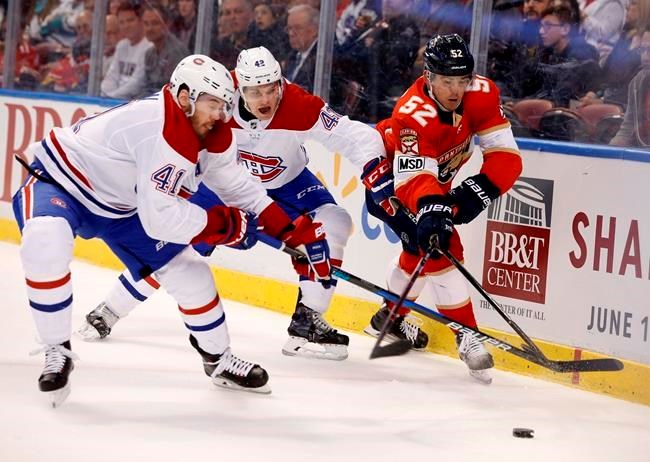 SUNRISE, Fla. — The Florida Panthers are hot at home and Roberto Luongo is doing his best to keep it that way.

Luongo made 40 saves in his second shutout of the season, Nick Bjugstad scored his fourth goal in two games, and the Panthers beat the Montreal Canadiens 5-0 on Thursday night for their seventh straight home win.

The Panthers have points in eight straight games, their only loss, 5-4 in overtime at Tampa Bay on Tuesday.

"After the last game in Tampa where I felt like I didn't really come up with the big save when I needed it, I really wanted to bounce back and make sure I was there if there were any breakdowns," Luongo said.

Evgenii Dadonov had a goal and an assist, and Vincent Trocheck, Micheal Haley and Jonathan Huberdeau also scored for the Panthers, who have points in eight straight games. Keith Yandle added three assists, and Aleksander Barkov had a pair to extend his point streak to a season-high eight games.

"I don't really think about that, I just play and try to help the team win the game," Barkov said. "If I can contribute in the offensive zone, that's my biggest goal."

The Panthers are two points behind Columbus for the final playoff spot in the Eastern Conference, with three games in hand.

"It's a good stretch for us," Yandle said. "When you have a long stretch of home games like we have, you have to be good."

Charlie Lindgren stopped 27 shots for the Canadiens, who lost their second straight. Lindgren has given up 11 goals in those games.

"We are making the mistakes that leave him by himself out there," forward Nicolas Deslauriers said. "We know he's good and we know he's doing his best and we're not helping him."

Leading 3-0, Dadonov's one-timer from the right circle stretched the Panthers lead to 4-0 at 1:23 into the third period.

Leading 1-0, the Panthers added two goals in the first 2:44 of the second.

Bjugstad took a pass from Barkov in the slot and backhanded the puck into the net at 1:41 to give the Panthers a 2-0 lead. Bjugstad, who had a hat trick at Tampa Bay on Tuesday, has 10 points in his last eight games.

"We started off a little slow, but it was good to get scoring from everyone and in a lot of different ways," Bjugsatd said. We're rolling here."

About a minute later, Derek MacKenzie passed from behind the net to Haley in the slot and Haley fired the puck past Lindren to make it 3-0.

"That kind of broke our backs," Canadiens coach Claude Julien said. "You have to live with the knocks and the bad breaks. But again, we're asking a lot of players to play bigger roles than they're ready for because we have an arm-length of injuries."

Montreal appeared to score at 16:30 of the third when Paul Byron poked in a loose puck, but the call was overturned on a coach's challenge when it was determined Jacob de la Rose interfered with Luongo.

"It was a bang-bang play," Luongo said. "As the guy shot it, his glove hit my head and I couldn't really track it. Happy they were able to see that and take it off the board."

Huberdeau put the Panthers ahead 1-0 on his power-play goal with 3:44 left in the first period. Trocheck backhanded a pass from the left circle to Huberdeau in the slot, and Huberdeau one-timed the puck over Lindgren's shoulder.

NOTES: Luongo posted his 75th career shutout to move within one of tying Tony Esposito and Ed Belfour for ninth place on the NHL's all-time list among goaltenders. ... Panthers coach Bob Boughner celebrated his 47th birthday on Thursday. ... Huberdeau has surpassed 20 goals (21) for the first time in a single season in his NHL career. ... Dadonov has five consecutive multipoint games (3-7-10). ... Yandle has 20 points in his last 18 games. The game marked Claude Julien's 250th as the Canadiens' coach. ... D Rinat Valiev suffered a lower-body injury in the second period and did not return. The Canadiens announced postgame on Thursday that they had recalled Brett Lernout from the AHL's Laval Rocket on an emergency basis.... Montreal is 0 for 13 on the power play in its past four games.