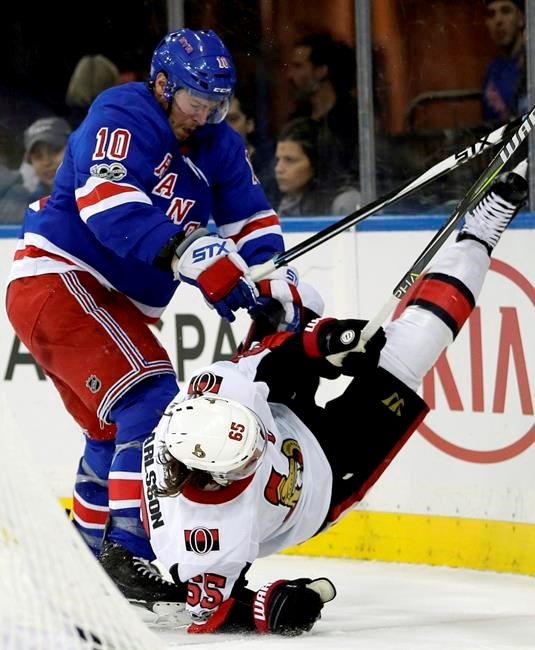 NEW YORK — Although Henrik Lundqvist didn't face a lot of shots, he came up big when he needed to.

Lundqvist stopped 20 shots for his second shutout of the season and 63rd of his career, leading the New York Rangers over the Ottawa Senators 3-0 on Sunday night.

"When you get that kind of support like I got tonight, clearing in front of me and getting to rebounds, it's easy to play in goal," said the veteran goalie, who was tested with 85 shots in losses at Chicago and Columbus the previous two games. "You just try to be solid and be there. They didn't have much and the guys played a really smart game tonight."

Kevin Hayes, Michael Grabner and Mika Zibanejad scored, and Mats Zuccarello had two assists to help the Rangers win the teams' first meeting since the Senators eliminated New York in six games in the Eastern Conference semifinals last May.

New York won for the seventh time in nine games and got its sixth straight victory at home.

"We put pressure when we needed to, we stepped back when we had to," Lundqvist said. "They have some really skilled players, players that can shoot the puck, too, and you have to respect that."

Craig Anderson finished with 24 saves for the Senators, who lost in regulation on the road for the first time this season after starting 4-0-1.

"Not one of our best," Ottawa captain Erik Karlsson said "We couldn't really find a groove and didn't find a way to sustain the pressure we knew that we could create. ... We didn't have an answer for what they threw at us."

With the Rangers leading 1-0, Lundqvist was tested early in the third. Mark Borowiecki fired a shot from the left point that the goalie stopped, and then he had to make a sensational left pad save on former teammate Derick Brassard's tip attempt on the rebound a little more than two minutes in. The Senators managed just three more shots on goal the rest of the period.

Grabner doubled New York's lead with a deflection on Marc Staal's shot from the point for his ninth of the season at 4:52. Grabner has eight goals and an assist in his last 11 games after getting a goal and an assist in the first 10.

There was some pushing and shoving about 2 1/2 minutes later after Borowiecki took a hit from the Rangers' Brendan Smith and went into the boards and crumpled to the ice. Borowiecki was down for several minutes and appeared to lose consciousness before being helped to the dressing room. Smith received a five-minute major for interference and a game misconduct, ending his night.

The Rangers clamped down on the penalty kill there, finishing the night 3 for 3.

Zibanejad's long empty-netter from his own blue line with about 2 1/2 minutes remaining made it 3-0 with his team-leading 10th.

Hayes got the Rangers on the scoreboard first, taking a pass from Jesper Fast and firing a shot from the right circle that went over Anderson's left shoulder for his fifth of the season at 4:46 of the second.

In the latter part of the middle period, Lundqvist had to stop a tip attempt in front by Mark Stone and a follow backhand try by Jean-Gabriel Pageau with just over four minutes remaining.

Lundqvist's best save of the opening period came late as he made a glove save while sliding to his right on a shot by Hoffman off a pass from Brassard on an odd-man rush.

"That's old school right there," Lundqvist said. "I think the last few weeks I have been playing a little more aggressive so my side-to-side movements are sometimes a little longer. I felt like in that situation there was a long way to go, so that's why I decided to go two-pad stack there and it worked out."

NOTES: C Matt Duchene has no points in five games with Ottawa since being acquired from Colorado as part of a three-team trade that sent F Kyle Turris to Nashville. ... Ottawa opened a stretch of 10 of 11 away from home. ... The teams play two more times this season: Dec. 13 and Feb. 17, both at Ottawa. ... The Rangers improved to 8-3-0 when scoring first and 6-0-0 when leading after two periods. ... New York is 27 for 31 on the penalty kill over the last 10 games.

Senators: At Washington on Wednesday night in the middle game of a three-game trip.

Rangers: At Carolina on Wednesday night before a four-game homestand.

Vin A. Cherwoo, The Associated Press