TORONTO — Kawhi Leonard looked for much of the night like he was running in mud. He limped badly after a big dunk. Two days after playing the longest game of his career, the Raptors superstar was hurting on Tuesday.
May 22, 2019 12:51 AM By: Canadian Press 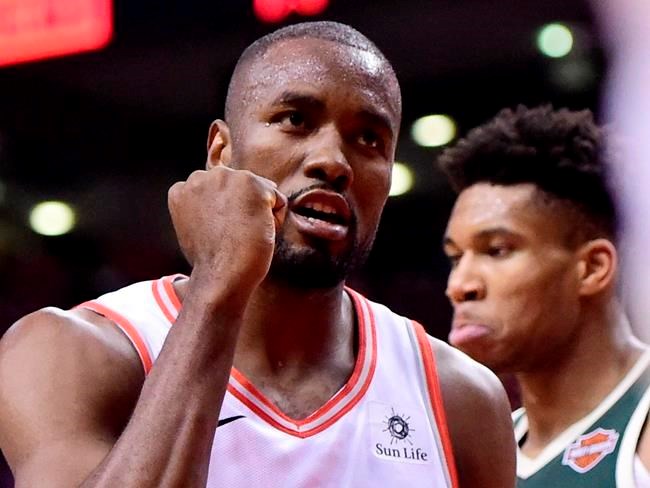 TORONTO — Kawhi Leonard looked for much of the night like he was running in mud. He limped badly after a big dunk.

Two days after playing the longest game of his career, the Raptors superstar was hurting on Tuesday. But the Raptors didn't need a superhuman effort from Leonard. They got big performances from everyone else.

Kyle Lowry had 25 points and Toronto beat the Milwaukee Bucks 120-102, tying the Eastern Conference finals series at two wins apiece. And moments after one of the best all-around games of the post-season, the Raptors guard talked about rallying around Leonard on a night he was "limited."

"We stepped up for him," Lowry said. "He's given us a lot through these playoffs. A couple of games where we can give him a chance to not have to do as much and carry the load as much — he got down to 34 minutes tonight. I wish he would have played less than 30.

"We want him healthy . . . but we have a game like this where everyone steps up, it's a lot of easing the pressure off him doing something offensively for us."

Six Raptors scored in double figures. Leonard had 19, Norman Powell had 18 points, Serge Ibaka had 17 points and 13 boards, Marc Gasol scored 17 points, and Fred VanVleet, whose shooting has been horrible in the playoffs, chipped in with 13.

The Raptors head back to Milwaukee for Game 5 on Thursday on the heels of two straight wins at home.

"We wanted to change the narrative coming home," said Powell, who led a bench that outscored Milwaukee's 48-23. "We wanted to protect home court. We wanted to come out with a lot of juice, be the aggressors, be more physical and take the game to them."

Khris Middleton had 30 points for the Bucks, while Giannis Antetokounmpo had 25 points and 10 rebounds.

Two nights earlier, the Raptors edged Milwaukee 118-112 in double overtime for their first win of the series, but the heavy minutes took their toll on players like Leonard, who missed all but nine games last season with a serious quadriceps injury, and played a career-high 52 minutes.

"I feel good," Leonard insisted after the game. "Keep going and keep fighting, and we have a chance to make history."

If Leonard was limited, the Bucks didn't get the memo. They double- and triple-teamed him all night, allowing other Raptors to score.

"The great thing about having him on your team is he still gets all the attention," said Lowry, who's also playing through pain with a sprained left thumb. "We fed off of that — drive, kick, swing. He gets in the lane, kick out."

The Bucks, who led the league with 60 wins in the regular season, two more than Toronto, are also known for bouncing back with big games after losses. Tuesday marked only the second time they'd lost back-to-back games this season.

Lowry scored 12 of the Raptors' first 17 points, and Toronto withstood an otherwise slow start to take a double-digit lead in the second quarter. They stretched it to 16 by the third quarter, and roared into the fourth up 94-81.

"Obviously, (our offence) was really good tonight, right?" said Raptors coach Nick Nurse. "Any time you look down and we had 32 assists, you know we're doing a lot right."

VanVleet had seven of the Raptors' 10-3 run that gave Toronto a 20-point cushion early in the final frame. Antetokounmpo drove to the hoop to slice the lead to 14 with 5:34 to play. But the Raptors locked down on the defensive end, and when Lowry scored with 3:50 to play, they led by 21, to the delight of a Scotiabank Arena crowd that included Maple Leafs Nazem Kadri and Mitch Marner, Olympic 100-metre champ Donovan Bailey, music producer Timbaland, former NFL star Terrell Owens and NBA commissioner Adam Silver.

Drake was at his animated best, on his feet for most of the night. He waved his arms in the air to get the crowd going. He windmilled an arm after Antetokounmpo missed a free throw. During a timeout, he walked behind Nurse and gave his shoulders a squeeze.

Nurse subbed Lowry, Gasol and Leonard out to a standing ovation with three minutes to play.

The coach said he was concerned about Leonard during the game, but added: "I think he's fine."

The Raptors lost the series' first two games in Milwaukee — the first a narrow eight-point defeat in a game they'd led most of the night. They've never come back to win a series after falling behind 0-2 in seven tries.

The series returns to Toronto for Game 6 on Saturday.

A running dunk by Antetokounmpo gave the Bucks an early seven-point lead, but the Raptors clawed their way back, and when Leonard drained his second free throw with 25 seconds left in the first quarter, they took their first lead of the game and went into the second up 32-31.

Ibaka's putback dunk capped a 13-0 Raptors run that straddled the first and second quarters and put Toronto up by 10. The Bucks pulled to within four — thanks largely to a 13-point quarter for Middleton — but the Raptors outscored Milwaukee 13-7 to the end of the quarter, and were wildly applauded as they headed to the locker-room at halftime with a 65-55 cushion.

The Golden State Warriors, who swept Portland on Monday night, await the winner of this series. The Warriors will be well-rested with 10 days off until the Finals tip off.