WINNIPEG — Bryan Little was having a bit of a hard time wrapping his head around recording his 500th career point. The Jets forward scored the game-winning goal as Winnipeg doubled up the Detroit Red Wings 4-2 on Friday. "Went by fast," Little said.
0
Jan 12, 2019 12:18 AM By: Canadian Press 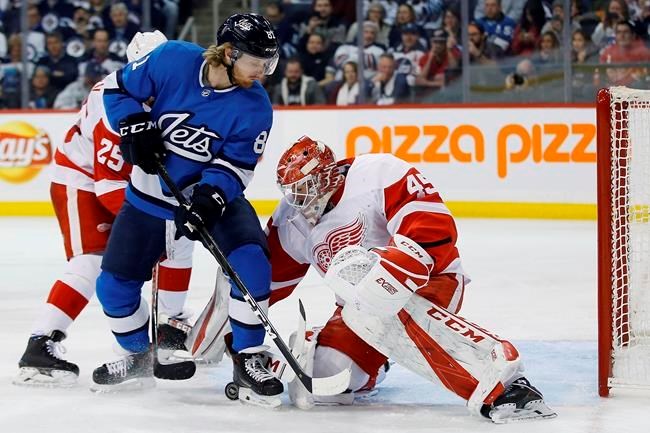 WINNIPEG — Bryan Little was having a bit of a hard time wrapping his head around recording his 500th career point.

The Jets forward scored the game-winning goal as Winnipeg doubled up the Detroit Red Wings 4-2 on Friday.

"Went by fast," Little said. "Trying to think of the years over my career and up to this point and it seemed like it flew by. Hopefully, there's many more to come."

Little's goal was his 209th, all scored with the Jets/Atlanta Thrashers' franchise that the 31-year-old native of Edmonton joined in 2007-08.

Kyle Connor scored once and added a pair of assists. Brandon Tanev and Blake Wheeler also had goals for Winnipeg, while Wheeler added one assist.

Laurent Brossoit made his 10th start of the season and stopped 33 shots for the Jets (28-14-2), improving his record to 9-1-1 and tying his career high for starts in a season.

"To start, I felt a little bit rusty," said Brossoit, who last started ahead of Connor Hellebuyck on Dec. 22. "First period was a little sloppy in my eyes, but second period, third period I definitely settled in and it felt good."

Forward Luke Glendening had a shorthanded goal and rookie defenceman Dennis Cholowski scored on the power play for Detroit, which lost its third straight game.

"We haven't been where we want to be this year and we've still got a long way to go, but we'll take any building block we can at this point," Glendening said of the special teams clicking.

Winnipeg scored early and late in the first period to mount a 2-0 lead.

Tanev notched his 10th goal of the season 13 seconds into the first frame and Wheeler had his pass attempt redirected into the net off the stick of Wings veteran Thomas Vanek with two seconds left.

"You start the game and you're down 1-0 before you blink. That's a hard way. You give away the goal basically," Detroit head coach Jeff Blashill said.

Little made it 3-0 at 4:41 of the second with his ninth goal of the season when his shot changed direction after hitting Detroit defenceman Mike Green, who was back after a 13-game absence with a foot injury.

Little, Tanev, Connor and Mark Scheifele, who assisted on Wheeler's goal, all extended their point streaks to four games. Scheifele and Connor each have six points in that span, Little five points and Tanev four.

The Wings got on the scoreboard at 10:03 of the second after Glendening and Filip Hronek went in on Brossoit by themselves. Hronek faked a shot at Brossoit and sent the puck to Glendening, who beat the netminder on the stick side.

Cholowski made it 3-2 at 6:50 of the third when Niklas Kronwall blasted a pass to him and Brossoit couldn't slide back in time to stop Cholowski's shot.

"(Kronwall) made a great play by faking a one-timer and the goalie went down and I don't think he realized that the puck came over to me," said Cholowski, who's from Langley, B.C.

"When I got it, I looked up and I saw a lot of net, so I was pretty grateful for that."

The Wings went on the power play with eight minutes remaining, but some blocked shots helped Brossoit and he also made some timely saves to kill off a delay-of-game penalty to Jacob Trouba.

Jets head coach Paul Maurice continues to be impressed with the way Brossoit is handling his backup duties since he signed as a free agent in the off-season.

"You can't let the demons of how many starts am I getting or how much ice time am I getting affect how you push yourself in practice," Maurice said.

"So he's been quietly a good leader for our group. He practises really, really hard, so when he gets into that game it's just a continuation of what he's doing. I think he's been just an outstanding acquisition for our team."

Connor scored into an empty net with 1:00 remaining.

Detroit plays in Minnesota on Saturday and Winnipeg hosts Anaheim on Sunday.